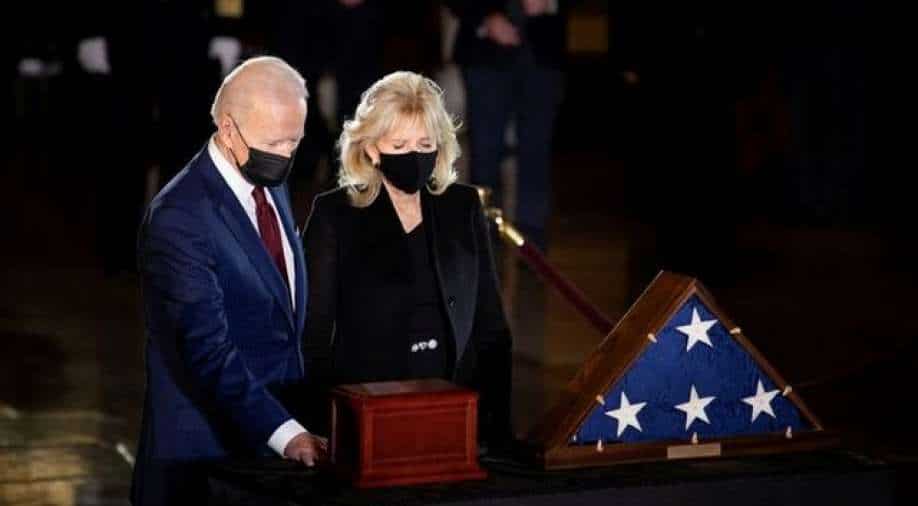 In a solemn ceremony, the cremated remains of Sicknick, who died of his injuries the day after the Jan. 6 attack, arrived on Tuesday night to lay in honor in the Capitol Rotunda until midday Wednesday.

In a solemn ceremony, the cremated remains of Sicknick, who died of his injuries the day after the Jan. 6 attack, arrived on Tuesday night to lay in honor in the Capitol Rotunda until midday Wednesday.

Biden and his wife, Jill, stood before the remains with their hands over their hearts in silent tribute to Sicknick.

Democratic and Republican leaders of the U.S. Congress filed into the Rotunda for the ceremony. One by one, Sicknick`s fellow Capitol Police officers approached the receptacle containing the remains and saluted. U.S. lawmakers will take their turn on Wednesday morning.

Sicknick was a casualty of the storming of the Capitol by hundreds of Trump supporters after a fiery speech in which the then-president urged them to “fight” his election loss to Biden. Four others died in the violence.

The incident led to Trump’s second impeachment and next week he will face trial in the Senate on a charge of inciting insurrection. Trump’s lawyers argued on Tuesday that lawmakers cannot legally impeach a former president and he once again stoked claims of voter fraud.

Since the 19th century, the caskets of about three dozen distinguished Americans have been honored at the Capitol. Twelve have been former presidents, who along with other government officials, judges and military leaders are said to “lie in state.”

In the Jan. 6 violence, Sicknick was pepper-sprayed and hit in the head, according to his father. An ambulance crew resuscitated him twice as he was rushed to a nearby hospital. He died Jan. 7 and no charges have been brought in the case.

Sicknick, who had served in the New Jersey Air National Guard, joined the Capitol Police in 2008.

The category of “laying in honor” was created after two Capitol Police officers were fatally wounded in 1998 by a gunman who ran to the offices of then-Majority Whip Tom DeLay.

Sicknick, who died at 42, is the fifth American to lay in honor at the rotunda. The other two were civil rights leader Rosa parks in 2005 and the Reverend Billy Graham in 2018.

Members of Congress will be able to view Sicknick on Wednesday morning. There will be a congressional tribute on Wednesday before a ceremonial departure.