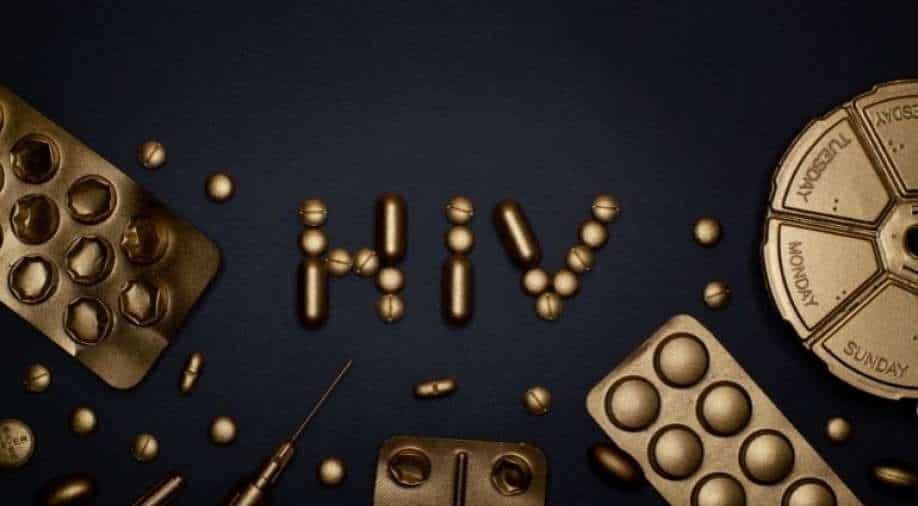 The life expectancy of South Africans, which HIV drove down from 63 in 1990 to a low point of 53 in 2004, has risen steadily since treatment began to be delivered by the public health system, and will pass 66 this year. Photograph:( Others )

AIDS is far from over. COVID has caused a disruption in testing, interrupted drug delivery and undermined livelihoods in ways that make people more vulnerable to that other virus, too. An estimated 700,000 Africans were newly infected this year

On a visit to a public hospital in a farming community in November, I saw something that astonished me.

Empty beds. Rows of them, their black plastic-covered mattresses stripped of sheets. Blue privacy curtains folded up over rails, out of the way.

I had never seen a Zambian hospital like this. When I last toured one, nearly 15 years ago, patients lay two or three to a bed, head-to-feet-to-head. And more on the floor. More on thatch mats in the hallways. The patients were gaunt, their eyes huge above sunken cheeks. Hopelessness and suffering hung in the air.

Now, the wards were silent, and not just because a COVID-19 wave had recently ended. There was only the bounce of my voice off the walls as I asked Morton Zuze, the doctor giving me a tour, where everyone was. When I told him that I had last spent time here in the mid-2000s, he knew what I was asking.

The only sign of HIV that I saw in Zambia was glossy billboards dotted around the capital, Lusaka, showing stylish, smiling people, with the slogan “I’m ending AIDS with …” and some helpful strategy: testing regularly or taking treatment or using drugs to prevent infection.

I was a correspondent based in Johannesburg at the height of the African HIV epidemic, the last pandemic to batter this region. In the early 2000s, there were 28 million people living with the virus in sub-Saharan Africa, and about a third of young adults in Zambia were infected. More than 2 million Africans were dying of AIDS each year.

HIV had long since become a treatable illness in wealthy nations, but here the price of antiretrovirals was still more than $10,000 per person per year. Entirely, impossibly, unaffordable.

Back then, I reported from villages in Eswatini, then known as Swaziland, where I couldn’t find more than a handful of people my age — just children and elderly people. I wrote from Johannesburg about the day that Nelson Mandela broke a powerful taboo and told South Africans his son had died of AIDS. I told the story of a grandmother named Regine Mamba in Zambia raising 12 orphaned grandchildren. And I interviewed the brave, and often desperately ill, activists, such as Zackie Achmat, a co-founder of South Africa’s Treatment Action Campaign, who were fighting with their lives to get access to treatment.

Almost two decades later, the fruits of what they fought for were vividly on display, and a reminder — useful at this moment as another COVID wave makes this pandemic seem unending — of how much is possible.

Science, in the form of drugs that quelled if not vanquished a deadly virus; a network of fierce, courageous activists; coordinated international efforts, including a huge investment by the U.S. Government — they all combined to deliver the miracle of that empty, echoing Zambian hospital ward.

We know how to do this.

In a clinic outside Cape Town, Linda-Gail Bekker, a renowned HIV researcher, mentioned to me almost in passing that “our longevity is back.” When I asked what she meant, she showed me the data: The life expectancy of South Africans, which HIV drove down from 63 in 1990 to a low point of 53 in 2004, has risen steadily since treatment began to be delivered by the public health system, and will pass 66 this year.

This was just one of a dozen interactions I had that I could not have imagined 25 years ago, when I began covering HIV in Africa.

In a public clinic in Soweto on my recent trip, I spent time with a community health care worker named Nelly Zulu, who told me that when people test positive for HIV at the clinic where she works, they are given their first pills to suppress the virus that day: no more of the grim wait I used to watch, as people tracked the decline of their immune systems until they qualified for the scarce drugs.

Nelly also told me that the number of positive cases was falling. She and her co-workers said they attributed this in part to pre-exposure prophylaxis, better known as PrEP. It’s an antiretroviral taken every day that helps keep people from being infected if they are exposed to HIV. Gay men in the United States have been using it for years, but it’s only recently come to Africa. Nelly and her colleagues said that women came to her clinic asking for it: “the ones who have older boyfriends who they can’t trust.”

Research shows that PrEP use isn’t high in Africa yet, but it was fascinating to me to hear Nelly talk about it casually. For so many years, the only thing that counsellors like her had in their AIDS prevention arsenal was condoms or trying to persuade people not to have sex at all.

In Durban, I happened to visit a clinic as nurses were screening young women volunteering for the first clinical trial of a South African broadly neutralizing antibody to fight HIV, which researchers hope could be the key to new drugs to prevent infection, new treatments that would be easier to take, and perhaps even a cure.

That same day, I visited the Africa Health Research Institute, where an infectious disease expert named Thumbi Ndung’u talked about that trial and other upcoming ones that represent real, strategic steps to a cure. I teared up when I began to understand the implications of the work he was describing.

“You believe this is going to work, don’t you?” I asked Ndung’u after he explained the hypothesis he would soon begin to test for inducing HIV remission. His normal demeanour is sombre to the point of sternness, but he broke into a wide grin. “If it works it will be very exciting,” he said.

In Zambia, I stopped by the white bungalow in Lusaka that houses the HIV treatment campaign. I wanted to interview Felix Mwanza and Carol Nyirenda, veteran activists I first met two decades ago, about lessons for the COVID response from the HIV epidemic — including the idea that government must take vaccines to people where they are, the way they learned to take HIV tests to bars and markets.

But when I asked Carol and Felix how they were, they had more immediate concerns. They talked about the challenges of late middle age — a loss of bone density, the miseries of menopause — and how it troubled them that there was little research into the long-term use of antiretroviral drugs in Africa. When they ask their doctors if something is “normal,” or perhaps a treatment side effect about which they should be concerned, they’re most often met with a shrug.

It was a valid point: a source of frustration and real concern. And it also left me a little bit delighted, because when I met Felix and Carol, no one imagined them having the luxury of ageing.

Back then, Carol, now 58, was getting ARVs from friends abroad. But when they ran out of money and couldn’t send the drugs, she “sat back and waited to die,” ravaged by a tuberculosis infection that her immune-suppressed body could not fight.

That night I had dinner with my friend Ida Mukuka and her family. I hadn’t seen Ida in 13 years. When we first met in 2003, she was a counsellor at an HIV clinic known for her ability to handle the tough cases — the men who threw their pregnant wives out of the house, or worse, when they were tested at the prenatal clinic and learned they were HIV-positive.

In 2006, Ida found out that her own husband had infected her. Treatment was still a rare commodity in Zambia then, and there was no guarantee she would survive until she had reliable access to it. I met her two daughters when they were small, wide-eyed girls and Ida confided to me back then that all she wanted was to keep them in school so that they might one day go to university and never feel they had to stay married to a violent, untrustworthy man, the way she did.

On this trip, those daughters joined us for dinner, coming straight from work. Mwamba is a brisk, funny woman of 25. She has a degree in development and is saving to go abroad for graduate school. Then Teba, 27, a lawyer, arrived, fresh from arguing her first case in front of the High Court.

I was mesmerized by the young women and the way their lives have turned out so differently than the future their mother feared for them in 2006.

So much of what I saw on this trip was unfathomable 25 years ago, or even 15. It was a shamefully long fight. The solutions came decades later than they should have. Each time I saw activists-turned-friends like Carol and Ida, we talked about the colleagues and friends who didn’t survive, who were ghostly presences as we sipped tea.

AIDS is far from over. COVID has caused a disruption in testing, interrupted drug delivery and undermined livelihoods in ways that make people more vulnerable to that other virus, too. An estimated 700,000 Africans were newly infected this year.

But HIV has been significantly beaten back. It’s a credit to former President George W. Bush’s PEPFAR program and the money it poured into treatment. To brilliant scientists such as those in Durban and Cape Town. And to activists like Ida, Felix and Carol.

I’m taking heart in what I saw in Chongwe: proof of human resilience and ingenuity, a reminder that the timeline in a battle with a virus is not short — not nearly as short as we would like it to be. But it is possible to come out the other side, into a future we can barely envision right now.