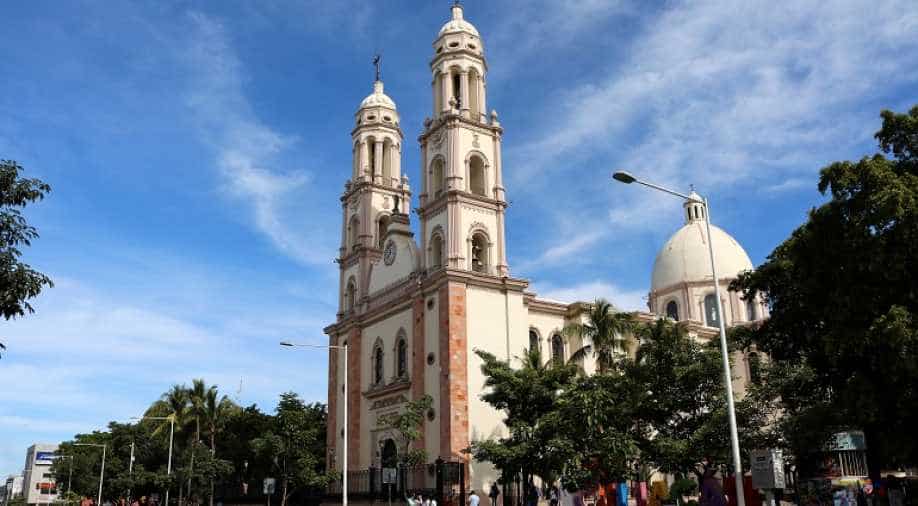 The Cathedral of Our Lady of the Rosario, where the daughter of Mexican drug lord Joaquin "El Chapo" Guzman got married recently according to local media, is seen in Culiacan, Mexico February 1, 2020.  Photograph:( Reuters )

The daughter of Mexican drug lord Joaquin "El Chapo" Guzman married another offspring of a drug empire in a lavish ceremony held in the cathedral of Sinaloa's state capital Culiacan, Mexican media reported, in a new display of her family's prominence.

The wedding took place on Jan. 25, Reforma said. Photographs and videos, including performances of a popular Mexican band and singers, fireworks, and yellow tape around the cathedral, were shared on social media.

A source at the Roman Catholic Diocese of Culiacan, confirmed the wedding took place, but declined to give details. The couple could not be reached for comment.

Culiacan citizens living and working near the cathedral told Reuters on Saturday that they had noticed an extravagant wedding though they had been unaware of who the couple was.

"The church is for everyone," Sofia, who declined to give her surname, said. "But the church shouldn't give privileges to anyone." Others agreed. "With money, you can close any building here," Francisca added. "It's unfair."

Blanca Margarita Cazares was sanctioned by the U.S. Treasury in 2007 for her "sophisticated money laundering apparatus" and links to Ismael "El Mayo" Zambada Garcia and Victor Emilio Cazares of the Sinaloa Cartel.

Reuters could not determine charges against the couple.

The Sinaloa Cartel has kept a firm grip on the drug trade even as "El Chapo" is serving a life sentence in prison in the United States; business has been proceeding unabated under the leadership of his sons and their associates.

Hundreds of heavily armed Sinaloa Cartel members, guns blazing, last year took the modern city of about a million people hostage after son Ovidio was detained. Within hours, he was released.

The brand got its name from when Forbes named her father the 701st richest person in the world in 2009, estimating his net worth at $1 billion.