I might have been poisoned: Vladimir Putin's opponent Alexei Navalny 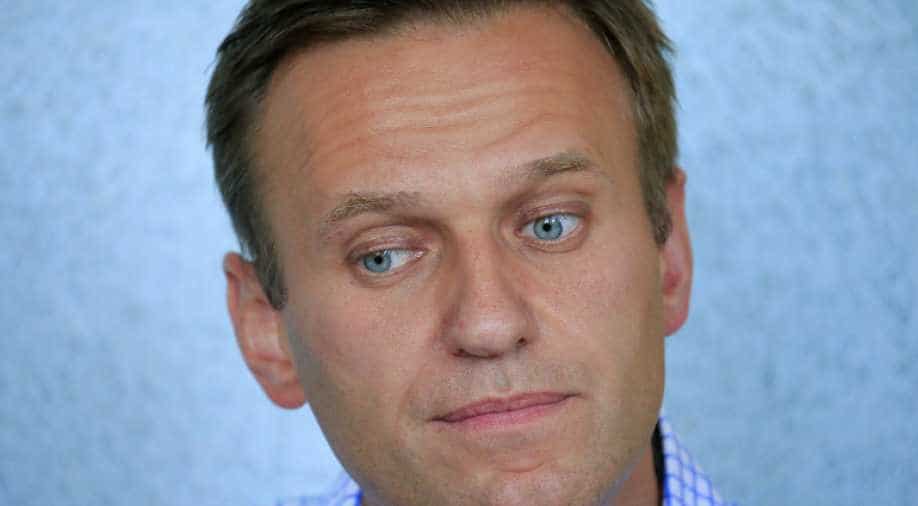 Russia's jailed opposition leader Alexei Navalny said Monday he might have been "poisoned" in his prison cell amid a crackdown on anti-Kremlin protesters.

Navalny, who has been in jail since last week for calling an unauthorised rally, released a picture of himself in hospital with his face puffy, especially around the eyes.

His lawyer and personal physician earlier said that Navalny, President Vladimir Putin's top opponent, was exposed to an unidentified toxic substance and that doctors had sent him back to jail despite his condition.

The 43-year-old lawyer was rushed to hospital from jail on Sunday, a day after nearly 1,400 people were arrested at an unauthorised protest -- the largest police crackdown on dissent in recent years.

Writing on his blog, Navalny, who has never suffered from allergies, said he woke up at night because his face, ears and neck burnt.

"I might have been poisoned," he said he thought at the time.

When he woke up Sunday morning his face was swollen and his eyelids "the size of ping pong balls", he said.

The swelling subsided after he was treated with steroids in hospital and he now looks like someone "who has been drinking for a week," he said.

He ruled out any foul play by local police, saying they themselves have been "shocked" by his appearance, but suggested that someone might have entered his cell when he was not there.

Earlier on Monday his lawyer Olga Mikhailova told reporters: "It is indeed poisoning by some unknown chemical substance."

The opposition politician's physician Anastasia Vasilyeva slammed doctors for sending him back to the jail despite needing to continue treatment.

"Alexei has been clearly sent back to the detention centre on orders from above," she said.

Vasilyeva accused the hospital doctors of not wanting to find out what caused Navalny's condition.

She said his health was in danger in prison and warned that his cell could be contaminated.

Vasilyeva, an ophthalmologist, previously treated Navalny after he nearly lost the sight in one eye following an attack in 2017.

The Russian opposition leader is serving a 30-day jail sentence for calling a rally after authorities blocked prominent independent candidates from taking part in upcoming Moscow parliament elections in September.

Ahead of the rally, police detained a number of popular opposition politicians who have fought to get on the ballot.

They included the director of Navalny's Anti-Corruption Fund, Ivan Zhdanov -- who was sentenced to 15 days in jail on Monday -- and prominent opposition politician and another would-be candidate Ilya Yashin who was jailed for 10 days, also Monday.

"I am not afraid of your rotten system, your arrests or your detention centres," Yashin said in court, according to an account that he published on social media.

Despite the crackdown, thousands of protesters -- many in their 20s and early 30s -- turned up on Saturday in central Moscow to demonstrate over the blocking of opposition candidates and to urge the authorities to open up the tightly-controlled system.

Police beat up protesters with batons and indiscriminately arrested people including the elderly and passers-by.

As riot police assaulted the peaceful protesters, Putin dived to the bottom of the Gulf of Finland aboard a submersible.

On social media, Russians seethed with anger over the brutality of police tactics, sharing stories of injuries and detentions.

Liberal Russian media estimated the rally turnout was up to 15,000 people.

While the Kremlin scrambled to contain the fallout, Germany slammed "the disproportionately tough police action" and urged the detained protesters' release.

France expressed concern over the recent developments in Russia, noting the "sudden deterioration" of Navalny's health.

The opposition has called for a new protest on Saturday.

The Bell, a respected Russian-language online publication, said the Kremlin had underestimated Muscovites' anger and readiness to protest.

"Now we'll have to think what to do with all of this," it quoted a Kremlin source as saying.

A person familiar with the Kremlin thinking told the Bell that the most prominent activists would be "banged up", while the rest would be intimidated into no longer protesting.