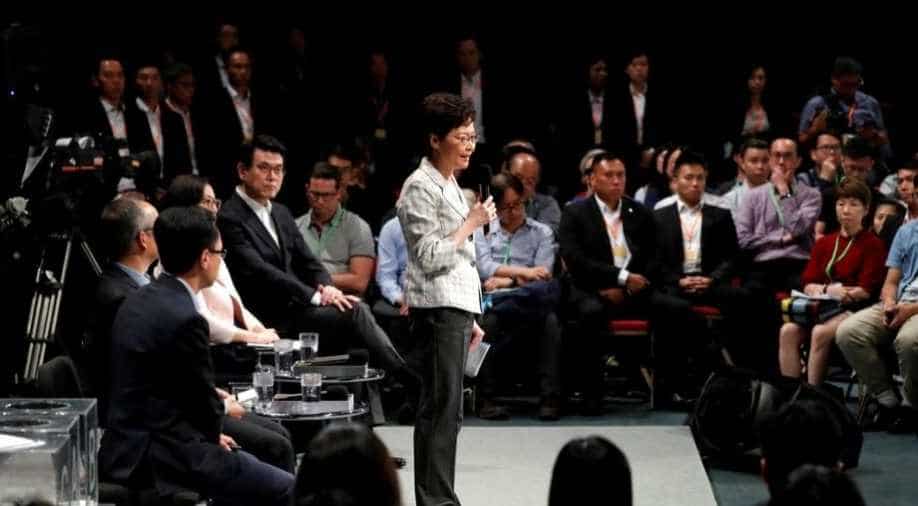 Inside the British colonial-era Queen Elizabeth Stadium, residents had earlier chastised Lam, accusing her of ignoring the public and exacerbating a crisis that has no end in sight.

Hong Kong protesters chanting anti-government slogans trapped city leader Carrie Lam in a stadium for hours on Thursday after she held her first "open dialogue" with the people in a bid to end more than three months of often violent unrest.

Activists blocked roads and stood their ground despite police warnings, before beginning to disperse. More than four hours after the talks had ended, a convoy carrying Lam and other senior officials left the building under police guard.

Inside the British colonial-era Queen Elizabeth Stadium, residents had earlier chastised Lam, accusing her of ignoring the public and exacerbating a crisis that has no end in sight.

She had begun by saying her administration bore the heaviest responsibility for resolving the crisis.

"The whole storm was caused by the extradition bill initiated by the government," Lam said. "If we want to walk away from the difficulty and find a way out, the government has to take the biggest responsibility to do so."

Protests over the now-shelved extradition bill that would have allowed criminal suspects to be sent to mainland China for trial have evolved into broader calls for full democracy, in a stark challenge to China's Communist Party leaders.

The demonstrations resumed after the dialogue session was over, with activists blocking roads around the stadium with iron railings and other debris.

The unrest followed an event that had been notable for not being the whitewash many predicted, with Lam directly facing off with an often critical and hostile audience, still aggrieved at the havoc they blame on the Beijing-backed leader and her team.

Protesters are angry about what they see as creeping Chinese interference in Hong Kong, which returned to China in 1997 under a "one country, two systems" formula intended to guarantee freedoms that are not enjoyed on the mainland.

Police warned that they would use force but did not intervene.

The event saw Lam holding talks with 150 members of the community.

Speakers criticising her for curbing electoral freedoms, ignoring public opinion and refusing to allow an independent inquiry into allegations of police brutality. Several called on Lam to resign, saying she was no longer fit to lead.

Lam listened, taking notes, before responding on occasion. She appealed for people to give her government a chance, while emphasising Hong Kong still had a bright future and a strong rule of law.

"I hope you all understand that we still care about Hong Kong society. Our heart still exists," she said. "We will maintain our care for this society."

She stressed again, however, that she saw no need at the moment for an independent inquiry, with an existing police complaint mechanism sufficient to meet public concerns.

She also reiterated there was no way she could bow to the demand for charges against those arrested for rioting to be dropped.

"I am not shirking responsibility, but Hong Kong really needs to calm down," she said. "We have to stop sudden violence breaking out... Violation of the law will result in consequences we have to bear."

She also conceded limits to what she could do.

"There are some things that me and my colleagues cannot influence in society ... but the dialogue will continue."

China says it is committed to the "one country, two systems" arrangement and denies meddling. It has accused foreign governments, including the United States and Britain, of inciting the unrest.

City rail services resumed on Thursday after being halted on Wednesday night at Sha Tin station, where protesters vandalised fittings for the second time this week.

Rail operator MTR has at times suspended city rail services during the protests, preventing some demonstrators from gathering and thus making it a target of attack, with protesters vandalising stations and setting fires near some exits.

When violence has flared, police have responded with tear gas, water cannon and rubber bullets.

Hong Kong is on edge ahead of the 70th anniversary of the founding of the People's Republic of China on Oct. 1, with authorities eager to avoid scenes that could embarrass the central government in Beijing. Activists have planned a whole host of protests on the day.

The Asian financial hub also marks the fifth anniversary this weekend of the start of the "Umbrella" protests, a series of pro-democracy demonstrations in 2014 that failed to wrest concessions from Beijing.