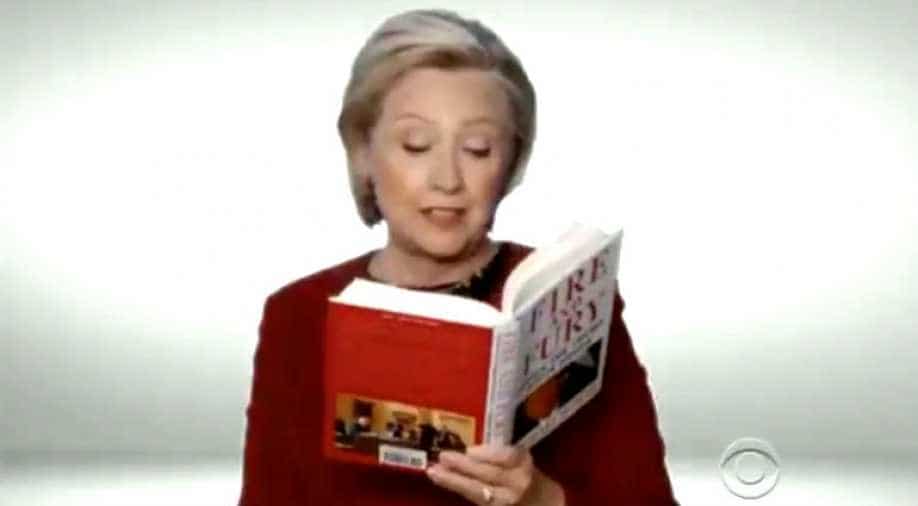 A screengrab of the video featuring Hillary Clinton. Photograph:( Others )

Clinton, who lost the 2016 election to Trump, read an excerpt from the book about Trump`s eating habits. "One reason why he liked to eat at McDonald`s: Nobody knew he was coming and the food was safely pre-made," Clinton read.

A surprise appearance from Hillary Clinton reading Fire & Fury at the Grammys pic.twitter.com/VAYk70pqAj

Corden then praised her, saying "The Grammy is in the bag."

The president`s family and members of his administration immediately criticized the segment.

His son Donald Trump Jr. tweeted: "Getting to read a #fakenews book excerpt at the Grammys seems like a great consolation prize for losing the presidency."

In a follow-up tweet, he added: "The more Hillary goes on television the more the American people realise how awesome it is to have @realDonaldTrump in office."

Nikki Haley, the U.S. ambassador to the United Nations who is known to post on social media about her love of pop music, tweeted that Clinton`s appearance "ruined the Grammys. Such a shame."

Wolff`s book Fire and Fury: Inside the Trump White House became an instant bestseller on Jan. 5 when its release was pulled forward after published excerpts set off a political firestorm, threats by Trump lawyers of legal action and an effort to halt publication.

The book, dismissed by Trump as full of lies, depicts a chaotic White House, a president who was ill-prepared to win the office in 2016 and aides who scorned his abilities. It is based on extensive interviews with Trump`s former chief strategist Steve Bannon and other aides.