Good morning, North Korea! Defector preaches on radio about the dangers of a personality cult 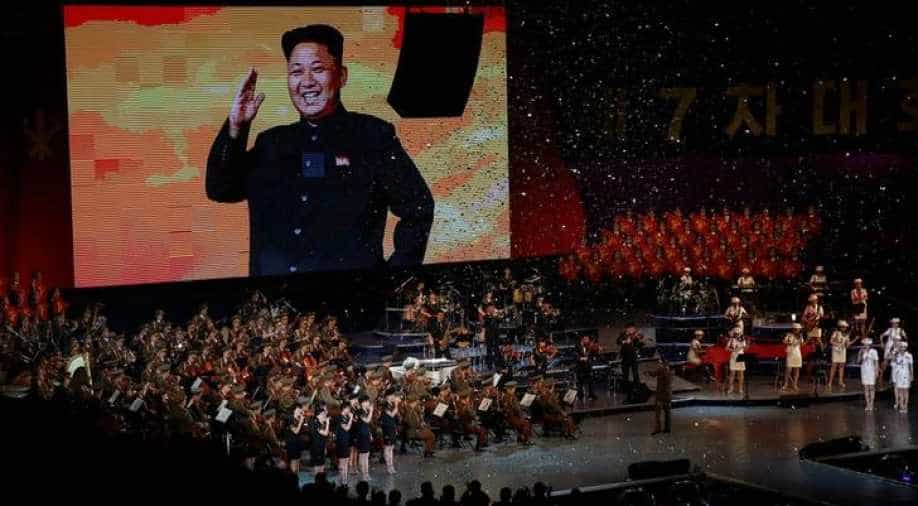 A picture of the North Korean leader Kim Jong Un appears on the big screen during a celebratory concert marking the end of the 7th Workers' Party Congress in Pyongyang, North Korea May 11, 2016. Photograph:(Reuters)
Follow Us
For an hour every day, Kim Chung-seong, a defector from North Korea and a Christian missionary, takes to the microphone in a small Seoul studio.
At 1 am, his show, "Hello from Seoul, the Republic of Korea", sends a mix of gospel music and news into North Korea, defying the isolated state's efforts to keep its people in the dark about the world, religion and the truth about its leaders.
"Brothers and sisters in the North, I hope this time can be a moment of prayer for a miracle that every party member of North Korea at the party congress can meet God, not take a further step into the cult of personality," Kim said.
He was referring to the meeting of the North's ruling Workers' Party this month, where young leader Kim Jong Un was unanimously elevated to party chairman.
"I am desperately praying that North Korea's Kim Jong Un and all administrators under him kneel down in front of God and repent for their sins, leave the path of tormenting their people," Kim, who came to the South in 2004, said in his studio at the Far East Broadcasting Company.
North Korea strictly bans access to outside information, but a growing number of North Koreans consume illicit media, including South Korean TV dramas that show the prosperity of life across the heavily fortified border, via contraband USB sticks and DVDs smuggled from China.
The impoverished North is still technically at war with rich, democratic South Korea because their 1950-53 conflict ended in a truce, not a treaty. It has also been slapped with UN and other sanctions for its nuclear and missile programmes.
Robert King, U.S. special envoy for North Korean human rights issues, told a Senate panel in October that up to 29 percent of North Koreans had listened to foreign radio and said the medium, including the U.S. government's Voice of America, remained the most important way to get information into the country.

"LISTENING UNDER THE BLANKET"
Kim Myung-jun, professor at Sogang University's school of mass communications in Seoul, said smuggled USB sticks and DVDs were more about entertainment, whereas radio carried news.
"Once you listen in, you tend to keep listening under the blanket. It gets you addicted," he said. "AM radio stations like Far East Broadcasting Company have pretty good signals and can be listened to clearly in much of North Korea."
Kim, the broadcaster, said he tried to delegitimise the three-generation Kim family dictatorship and preach Christian gospel on his show, often with fellow defectors as guests.
"I am not saying everything is bad in North Korea," said Kim, 39, who has hosted the show for six years.
"But, for example, if the party congress is meant to worship one particular person and make 20 million people that person's slaves, that is meaningless. That's what I am talking about on my show."
North Korea's constitution guarantees freedom of religion provided it does not undermine the state, but outside of a small handful of state-controlled places of worship, no open religious activity is allowed.
It is also illegal to own a radio that can be tuned, and the only radio or TV sets permitted are those pre-set to state channels. However, many tune in to foreign shows with smuggled Chinese radios and illegally altered North Korean sets.
Defector Ko Ji-eun, a weekly guest said she was a fan of Kim's show while hiding in China for several years.
After she arrived in Seoul last year, Ko met a fellow defector who had listened to the show while inside the North last year and has since fled to the South.
"North Koreans are now using Chinese earphones not to expose themselves to authorities," Ko said. "Many people inside North Korea are listening to this radio a lot."