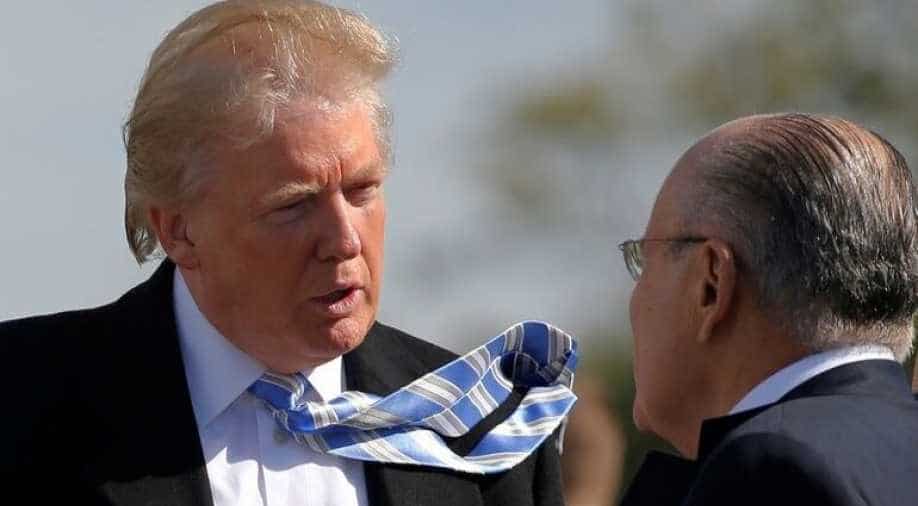 Giuliani has emerged as a central figure in a scandal that has now engulfed Trump and left him facing an impeachment enquiry.

Rudy Giuliani, President Donald Trump's personal attorney, says he met Ukrainian officials in Madrid, Paris and Warsaw this year as he pushed an investigation into one of Trump's main political rivals in the 2020 presidential election, former Vice President Joe Biden.

Giuliani has emerged as a central figure in a scandal that has now engulfed Trump and left him facing an impeachment enquiry into whether he misused his office for his own political gains.

One of the key questions is who financed Giuliani's globe-trotting as he pursued unsubstantiated allegations that Biden had tried to fire Ukraine's then Chief Prosecutor, Viktor Shokin, to stop him investigating an energy company on which his son Hunter served as a director.

"Nobody pays my expenses," Giuliani said in an interview with Reuters on Friday. "What does it matter if I'm getting paid for it. Isn't the real story whether he (Biden) sold out the vice presidency of the United States, not whether I got paid for it?"

Reuters was not able to independently verify how Giuliani paid for his trips.

Biden has accused Giuliani of peddling "false, debunked conspiracy theories," and on Sunday urged U.S. television networks to stop booking him to appear on air.

Giuliani travelled to Madrid to meet Andriy Yermak, a top adviser to Ukrainian President Volodymyr Zelinskiy, a few days after a July 25 phone call in which Trump pressed Zelinskiy to investigate Biden. Yermak had sought the meeting with Giuliani.

Giuliani said that he chose Madrid as the meeting place because he was going to be there anyway on behalf of two clients, whom he declined to name.

"We were negotiating where to meet. He was going to come to New York. I said Mr. Yermak, I'm going to Madrid for four days, five days. Would it be easier if I met you there? He said yes, so those expenses were paid by I assume one client. Since I took two days off I think I paid some of that personally as well."

Giuliani did not say what they discussed at that meeting, but a whistleblower complaint about Trump's call with Zelinksiy made public last week said U.S. officials had characterized the meeting as a "direct follow-up" to the president's call. Giuliani said he had received no money from Trump's election campaign or the Republican National Committee, the bureaucratic body that oversees Trump's Republican Party.

He said he did not view his work as a "political act."

"This began almost a year ago, two years before any election, when I heard the allegations about Joe Biden I did not think about them as connected to the 2020 election. At that point, he wasn't even a candidate."

Giuliani said he met a Ukrainian prosecutor in Paris in April or May for further discussions about the firing of Shokin. He added that he had been in the French capital "for other reasons once again."

Giuliani said he met Shokin's replacement, Yuriy Lutsenko, in Warsaw in February after first meeting him in New York in January. Giuliani said the meeting with Lutsenko in Warsaw was "really social." "I think it was either dinner or cigars after dinner. Not opportune for substantive discussion," he said.

In a break with the president, Trump's former homeland security adviser Tom Bossert, on Sunday said that he was "deeply disturbed" by Trump's call with Zelenskiy and that Trump was referring to "a debunked conspiracy theory."