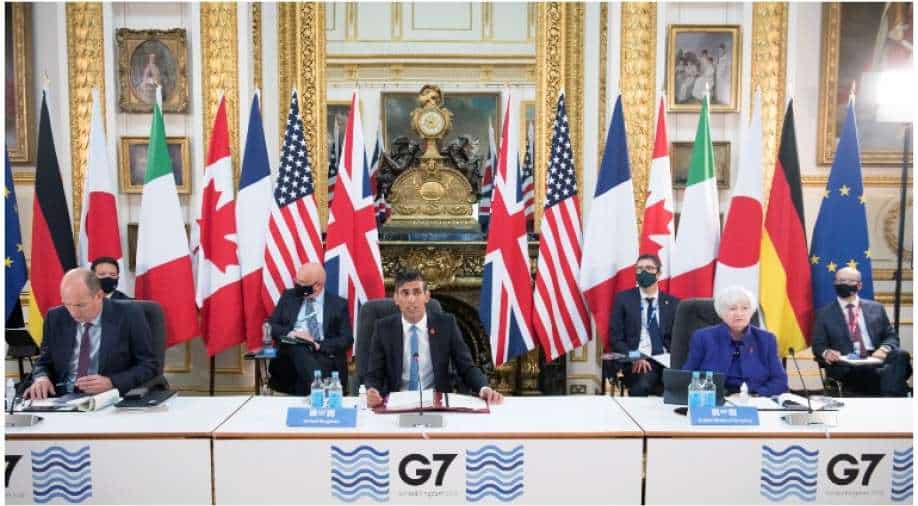 FILE PHOTO: Britain's Chancellor of the Exchequer Rishi Sunak speaks at a meeting of finance ministers from across the G7 nations ahead of the G7 leaders' summit, at Lancaster House in London, Britain June 4, 2021 Photograph:( AFP )

G7 leaders were on Sunday urged to take urgent action to secure the future of the planet, as they finalised new conservation and emissions targets to curb climate change, and wrapped up a three-day summit where revived Western unity has been on show.

Veteran environmentalist and broadcaster David Attenborough told the gathering of the world's richest nations the natural world was "greatly diminished" and inequality was widespread.

"The question science forces us to address specifically in 2021 is whether as a result of these intertwined facts we are on the verge of destabilising the entire planet?" he said.

"If that is so, then the decisions we make this decade -- in particular the decisions made by the most economically advanced nations -- are the most important in human history."

The leaders, holding their first in-person gathering in nearly two years due to the coronavirus pandemic, will agree to protect at least 30 percent of both land and ocean globally by the end of the decade.

The "Nature Compact" struck to try to halt and reverse biodiversity loss is also set to see them commit to nearly halve their carbon emissions by 2030, relative to 2010.

It includes phasing out the use of "unabated coal" -- fuel whose emissions have not gone through any filtering -- "as soon as possible", ending most government support for the fossil fuel sector overseas, and phasing out petrol and diesel cars.

Hailing the pact, host Boris Johnson said the G7 wanted to "drive a global Green Industrial Revolution to transform the way we live".

Climate change was a key G7 priority for Britain at the summit in Carbis Bay, southwest England, as it tries to lay the groundwork for hosting the UN COP26 environment summit in November.

But before the pledges had even been formally adopted, environmental campaigners blasted them as lacking enforcement and the necessary scope.

"Despite the green soundbites, Boris Johnson has simply reheated old promises and peppered his plan with hypocrisy, rather than taking real action to tackle the climate and nature emergency," said Greenpeace UK's executive director John Sauven.

The G7 -- Britain, Canada, France, Germany, Italy, Japan and United States -- were eager to renew ties after the discord of Donald Trump's four years in power.

Joe Biden has sought to turn the page on his predecessor's international isolationism, seeking to open a new chapter in the Western alliance after Trump alienated and exasperated it at every turn.

A lingering row between Britain and the European Union over post-Brexit trading arrangements in Northern Ireland hung over the talks.

But London sought to bring all sides together using the "soft power" diplomacy of Queen Elizabeth II and her heir Prince Charles, at a Friday night reception for leaders and EU chiefs.

Overall, the summit was largely consumed with the tough task of forging a more comprehensive response to the pandemic.

Leaders agreed a declaration to help prevent future pandemics and are expected to commit to donate one billion Covid-19 vaccine doses to poor countries.

However, there they also faced pushback, with critics arguing it provides just a fraction of what is needed to inoculate the world against the virus, which has claimed nearly four million lives globally and is still spawning new variants.

"We needed 11 billion vaccines, we've only got offered a plan for one billion. We needed $50 billion allocated to the vaccination of the world, and (have) only $5 billion," he told Sky News Sunday.

"Millions of people will go unvaccinated and thousands of people, I'm afraid, will die."

The "Build Back Better World" (B3W) project is aimed squarely at competing with Beijing's trillion-dollar Belt and Road infrastructure initiative, which has been widely criticised for saddling small countries with unmanageable debt.

The leaders will publish further details on the B3W in the traditional end-of-summit communique, alongside issuing the Carbis Bay Declaration on health policy.

On other shared foreign policy challenges, on promoting "open societies", Washington is pushing for a stronger stance on China's alleged forced labour practices against its Muslim Uyghur minority.

Current tense relations with Moscow, in particular over its cyber activity, are also expected to feature, before most present reconvene in Brussels Monday for a NATO meeting, and Biden heads to Geneva for talks with Russia's Vladimir Putin.