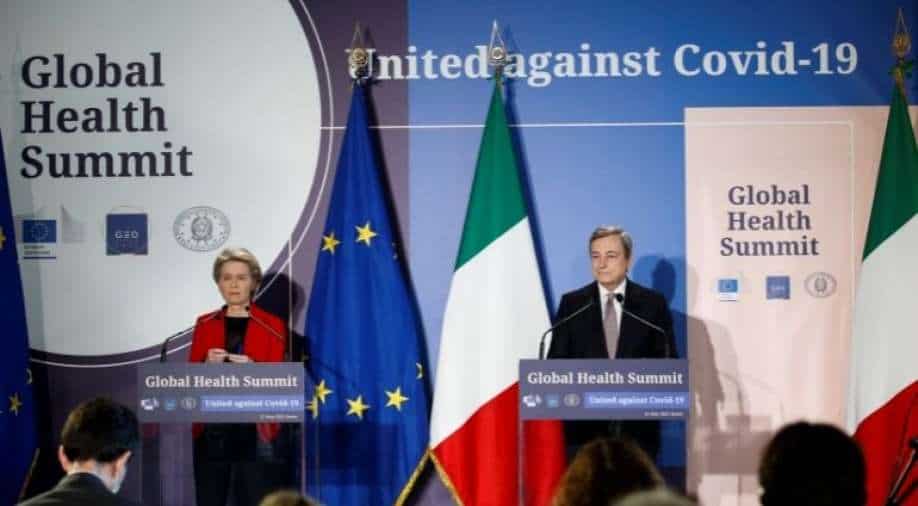 The Rome Declaration is made up of 16 "mutually reinforcing principles" that "reconfirm our commitment to global solidarity, equity, and multilateral cooperation" and to promoting "sustained financing for global health", the G20 leaders said on Friday

The G20 leaders have issued a joint declaration at the close of the Global Health Summit aimed at coordinating worldwide efforts against the Covid-19 pandemic.

The Rome Declaration is made up of 16 "mutually reinforcing principles" that "reconfirm our commitment to global solidarity, equity, and multilateral cooperation" and to promoting "sustained financing for global health", the G20 leaders said on Friday.

"We affirm our support for efforts to strengthen supply chains and boost and diversify global vaccine-manufacturing capacity, including for the materials needed to produce vaccines, including by sharing risks, and welcome the vaccines technology transfer hub launched by the WHO," the declaration read.

During a joint press conference at the close of the summit, Italian Prime Minister Mario Draghi and European Commission President Ursula von der Leyen expressed their satisfaction with the outcome of the event, which was organised by the Italian G20 Presidency in partnership with the European Commission.

"I am very pleased with this summit because of the strength of the commitments that were undertaken, and the absolute conviction and sincerity with which they were made," Draghi told reporters.

The Rome Declaration is "groundbreaking and historical because for the first time you have the G20 (members) all committing to basic principles", von der Leyen said.

The most important of those principles, she said, is multilateralism, which runs like a golden thread through the Declaration.

"This is a very clear `no` to health nationalism, to export bans, to bottlenecks," von der Leyen explained.

"Supply chains have to be open. All the G20 members have agreed on that."

"We have discovered that a complete openness of boundaries is essential to produce vaccines in huge quantities and to make sure they are distributed to everybody," the Prime Minister said.

Von der Leyen added that Team Europe, which consists of the EU, its member states, the European Investment Bank (EIB) and the European Bank for Reconstruction and Development (EBRD), will donate 100 million doses to low-income countries this year.

Also taking part in the summit was WHO Director-General Tedros Adhanom Ghebreyesus, who said closing remarks on Friday: "Yesterday alone, more than 13,000 people around the world lost their lives to Covid-19, nine every single minute. Today the number will be similar and people will continue to die as long as the global disparity in vaccines persists."

The WHO chief went on to say that while "the rapid development of Covid-19 vaccines is a triumph of science, their inequitable distribution is a failure for humanity".

Also attending the one-day virtual conference were representatives from international organisations such as the UN, the African Union, the Association of Southeast Asian Nations (ASEAN), the World Bank, and the International Monetary Fund (IMF).

Apart from the G20 members, Singapore, Spain and the Netherlands attended the summit as guest countries.

Friday`s summit built on the Coronavirus Global Response, which is the European Commission`s campaign for universal access to affordable coronavirus vaccination, treatment and testing.

The campaign launched in May last year has raised 15.9 billion euros ($19.4 billion) so far in pledges.