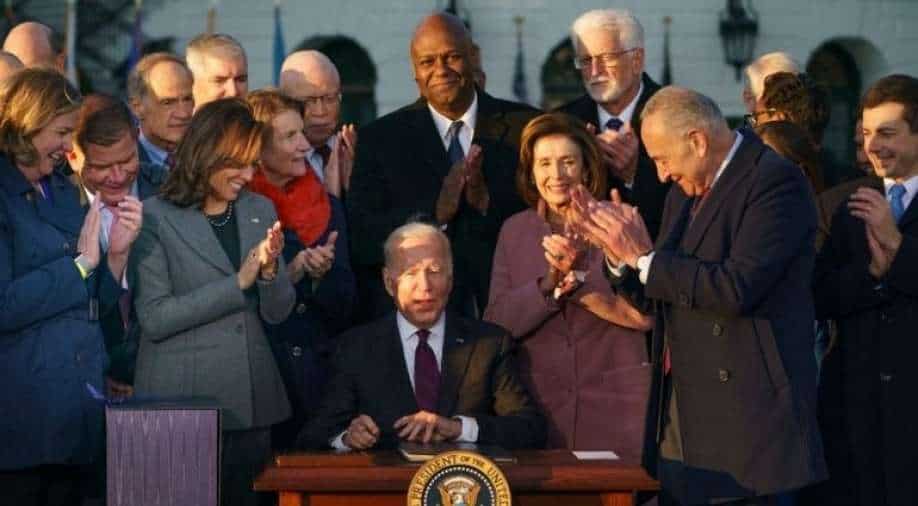 US President Joe Biden (C) receives applause after signing H.R. 3684, the “Infrastructure Investment and Jobs Act” on the South Lawn of the White House in Washington, DC. Photograph:( AFP )

The marquee programs within the Democrats’ social safety net and climate change bill, such as universal prekindergarten, child care subsidies, and prescription drug price controls, have garnered most of the public attention

The marquee programs within the Democrats’ social safety net and climate change bill — such as universal prekindergarten, child care subsidies and prescription drug price controls — have garnered most of the public attention. But when a nearly $2 trillion piece of legislation moves through Congress, it affords lawmakers ample opportunity to pursue any number of niche issues — and lobbyists and industries plenty of room to notch long-sought victories tucked deep inside thousands of pages of text.

That is the case with the Build Back Better Act, which could aid a wide array of special interests and Democratic allies that have waited years for such a moment.

“I welcome the attention. I don’t think these are fringe, niche issues,” said Rep. Earl Blumenauer, D-Ore., who had no reservations about extolling one of his cherished provisions: the tax incentive to help consumers purchase electric bicycles, or e-bikes.

So far, President Joe Biden and leading Democrats have publicly championed the bill’s biggest-ticket and most ambitious items. Rep. Steny Hoyer of Maryland, the majority leader, said Tuesday that he expected a vote on the measure by Friday, although it could slip to Saturday.

Rep. Sean Patrick Maloney of New York, chairman of the House Democrats’ campaign arm, called it “the most important investment in our families, our people, since the New Deal.”

Republican opponents, too, have largely fixated on the broader issues: the role of government, the economic repercussions of tax increases and the potentially inflationary effect that more government spending could have.

That has left lawmakers that much freer to secure provisions that have largely avoided scrutiny. Rep. Jimmy Panetta, D-Calif., another proponent of electric bike subsidies, said the tax-writing Ways and Means Committee drafted its section of the bill, provision by provision, and no one objected to the e-bike measure, which would cover 30% of the cost, up to $900, to, as he put it, “put butts on bikes.”

“Once you get out there, once you start talking about benefits and once you talk to people who have tried e-bikes, they accept it and they want it,” he said. Getting the money into the bill “was easier than I expected,” he added.

Such pride of authorship appears to be widely shared. Many obscure provisions may emerge as subjects of ridicule, but Democrats are not shying away from their work. Every niche item has a constituency that regards it as central.

A Senate Republican memo, for instance, singled out the $50 million pilot program, tucked into a broader home health care section, to promote the use of doulas, professionals whose sole priority is to support and provide guidance to birthing mothers. Doulas — the word means “servant” in Greek — typically lack formal obstetric training and provide care such as massage and other touch therapy, rather than medical services. They are used by only a small percentage of pregnant women in the United States.

But some Democratic-led states have moved to broaden access to them, including New York, which began a pilot program to expand Medicaid coverage for doula services. The Democrats who secured the doula funding in the hulking social policy bill do not duck their responsibility for it. Rep. Alma Adams, D-N.C., co-chairwoman of the Black Maternal Health Caucus, said the doula provision is just one of several she helped secure.

Rep. Robin Kelly, D-Ill., said Black women die in childbirth at four times the rate of white women, arguing that the doula assistance is a necessity.

“Too many moms have died in the United States, and doulas have the cultural competency to support mothers before, during and after birth,” Kelly said. Doulas, she said, are “advocates for the birthing mom.”

Blumenauer was especially proud of a $1.9 billion provision, written to stave off the death of local news media, that would provide local newspapers and broadcasters a payroll tax credit worth 50% of wages up to $50,000 for the first year and 30% of wages in the second year for each employee. And it is not confined to tiny outlets; a “qualifying publication” must “serve a local community by providing local news,” but the credit is capped at 1,500 employees a quarter.

“The collapse of local journalism has had serious consequences for our ability to govern,” said Blumenauer, a senior member of the tax-writing Ways and Means Committee, pointing to anti-Muslim and other offensive remarks made by a Republican truck driver who defeated New Jersey’s Senate president this month — but revealed by the news media only after his election.

“There was no opportunity for local media to provide even basic information about the candidates,” Blumenauer said. “The guy would never have been elected if he had gotten any scrutiny at all.”

Some of the measures tucked into the bill have languished for years. In 2007, Sen. Arlen Specter, R-Pa., drafted legislation that would allow lawyers who work on a contingency basis — they will be paid only if they win — to take a tax write-off of expenses from a case as they are incurred. Currently, such expenses can be claimed only once judgment on the case has been rendered.

Since the measure was written, Specter switched parties, was defeated and then died, but his work has found its moment. The change would generate considerable savings for trial lawyers — $2.5 billion, according to the Joint Committee on Taxation, Congress’ nonpartisan referee on tax policy.

“Lawyers working on a contingency fee basis cannot deduct their expenses until the case resolves, which can be years after the expense is incurred,” said Carly Moore Sfregola, a spokeswoman for the American Association for Justice, the trial lawyers’ lobby. “Contingency fee arrangements are the only way that regular people can afford to seek justice.”

And many of the measures have bipartisan origins. An effort to include independent music producers in an existing tax break for film, television and live theatrical productions found a champion in Tennessee’s conservative firebrand senator, Marsha Blackburn, at the behest of Nashville.

Rep. Linda T. Sánchez, D-Calif., initially drafted the Helping Independent Tracks Succeed, or HITS, Act at the beginning of the coronavirus pandemic in 2020, but she was able to bring along Blackburn; Rep. Ron Estes, R-Kan., and Sen. Dianne Feinstein, D-Calif.

Now, with Sanchez’s help, the act and its tax deduction of up to $150,000 for the costs of producing sound recordings have found their way into the social policy bill, at a cost to the Treasury of $35 million over 10 years.

Blackburn has no intention of voting for the larger bill, but, she said, the act still “is my baby.” In a recent interview on the Fox Business Network, she condemned the legislation, saying, “You’ve got the socialist Democrats who are trying to push all of these socialist wish list items into this bill.”

Other provisions might suffer from their names more than their intentions. Tree planting is widely accepted as a way to absorb carbon from the atmosphere, and a provision in the climate change section of the bill to ensure that tree planting include poor neighborhoods might have escaped notice.

But because Democrats used the buzz phrase “tree equity” to describe it, Senate Republicans singled out the $2.5 billion provision in a memo as one of the questionable “earmarks for Democrat interests and allies,” along with environmental justice tax credits for universities and climate justice block grants.

Republicans have also denounced a $177 million tax credit to entice university donors to support infrastructure research, a provision that Blumenauer said should be extolled, not ridiculed.

“Large research institutions are awash in money,” he said. “For smaller colleges, we’re trying to give an opportunity to build their own programs on infrastructure and give more flexibility by encouraging private donations.”

So far, the highest-profile Republicans have kept their criticism at the loftiest level. Rep. Kevin McCarthy of California, the Republican leader, took to the House floor to declare, “On the merits, this bill deserves to be defeated. Fundamentally, it’s anti-worker, anti-family, anti-jobs, anti-energy and anti-American.”

But as its more obscure provisions come to light, the line of attack may change.

Rep. Cathy McMorris Rodgers of Washington, the top Republican on the House Energy and Commerce Committee, previewed that message before the House Rules Committee last week, when she denounced a bill that she said “gives kickbacks to your political allies and campaign donors, all while you print records amount of money that we don’t have to build more inflation.”