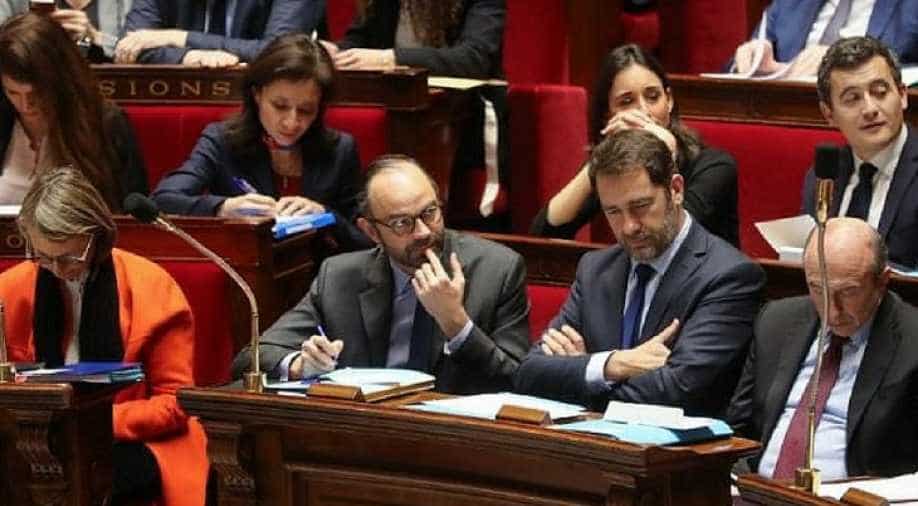 French Prime Minister Edouard Philippe, center-left, attends a session of questions to the government on January 24, 2018 at the National Assembly in Paris. Photograph:( AFP )

France's parliament has banned lawmakers from wearing any religious symbols under a new "neutral" dress code, an extension of the country's strict secular rules that is seen as going too far by some critics.

Under the change approved late Wednesday, members of the National Assembly must avoid "the wearing of conspicuous religious symbols, uniforms, logos or commercial messages or political slogans."

The regulation was brought in following an outcry over an MP wearing a football shirt in the parliament, but the inclusion of religious symbols in the new rules quickly became a talking point and a focus of attention.

Until now, lawmakers were instructed to simply "respect the institution", which generally meant women wearing smart clothes and men sporting a suit and tie, though this latter requirement was relaxed last year.

Some 20th-century lawmakers included priests in religious garb, such as Henri Groues, better known as Abbe Pierre, and several Christian faith leaders were critical of the new restrictions on Wednesday.

The head of the Protestant Federation of France, Francois Clavairoly, said the change had been made "in the spirit of obsessive radical secularism."

The speaker of the parliament, Francois de Rugy, defended the changes, saying they were in line with a 2004 law that banned schoolchildren and teachers from wearing conspicuous religious symbols.

That was seen by critics as penalising Muslims in particular by banning headscarves and veils, but Jewish kippas were also covered by the regulations.

"We're adopting a framework and limits... to avoid any sort of provocation," de Rugy said.

Schoolchildren, teachers -- and now lawmakers -- are allowed to wear small Christian crosses around their necks, while Jews are permitted to wear a Star of David and Muslims can carry a Hamsa amulet.

The laws and rules are intended to underline France's commitment to the principle of secularism -- the separation of church and state -- which was enshrined in a flagship 1905 law.

Some politicians support extending the ban on religious symbols to universities and even to the workplace, while some see secularism as camouflage for an Islamophobic campaign against the veil.

Lawmakers will be allowed to deviate from the new dress rules if they can justify their appearance as traditional clothing, however.

Moetai Brotherson, an MP from the French Pacific island of Tahiti, will be authorised to continue wearing his lavalava, a traditional Polynesian skirt.