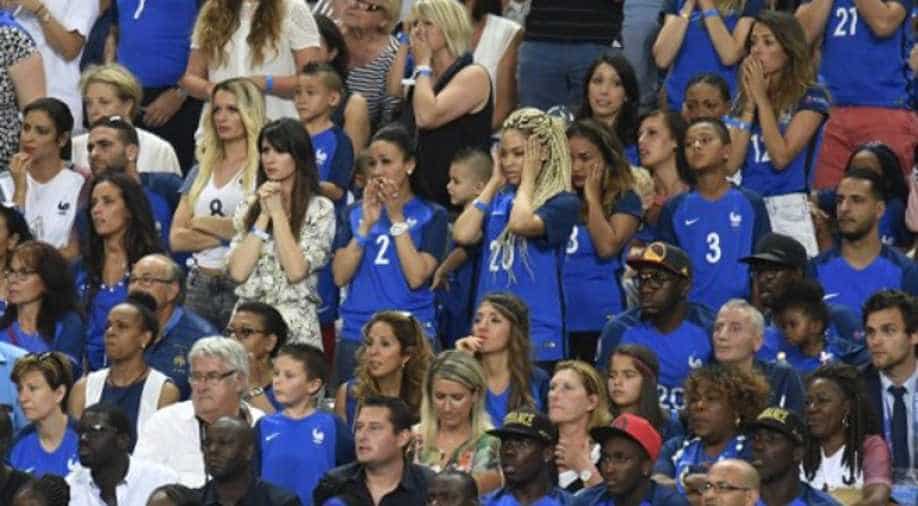 'With everything that has happened, the attacks, the demonstrations, the economic crisis, we deserved something to make us feel better,' said Lazaro de Santana, 31, as he joined thousands who filed away dejected. Photograph:( Getty )

Follow Us
The open-top bus for the victory parade was ready and President Francois Hollande said France's success at Euro 2016 was helping the country to heal from the Paris attacks, but the party fell flat.

Authorities had braced for mass celebrations if France, a country still on high terrorist alert, won Sunday's final against Cristiano Ronaldo's Portugal, but the 1-0 defeat crushed the host nation's hopes.

Portuguese fans were the only ones celebrating at the Stade de France and the 90,000 crowd at the fan zone under the Eiffel Tower fell silent when Eder scored Portugal's long-range winner.

"With everything that has happened, the attacks, the demonstrations, the economic crisis, we deserved something to make us feel better," said Lazaro de Santana, 31, as he joined thousands who filed away dejected.

The night was also scarred by disgruntled supporters' clashing with riot police after they were denied entry to the filled-to-capacity fan zone.

Police fired teargas after fans pelted them with bottles. Other youths lit a bonfire near the Eiffel Tower.

The buildup to Euro 2016 had been overshadowed by fears of more jihadist attacks. In the days before it kicked off, unions disrupted trains and grounded planes and uncollected rubbish built up in the streets in strikes and protests against labour reforms.

But once the football began, the crowds at the fan zones grew with every match featuring France, while restaurants and cafes showing Les Bleus' matches were reservation-only by the time of the final.

"The French people needed to find their way again," Hollande said in a commentary on the wave of support for the national team.

"We saw it at the time of the attacks. We came together in the dramas, we had to find ourselves in the happiness, to come together," he wrote in the Journal du Dimanche.

The November 13 attacks across Paris left 130 dead. The Stade de France where France were playing Germany at the time was one of the sites targeted by suicide bombers along with the Bataclan concert hall and cafes.

Hollande said Didier Deschamps' French team had been "very marked" by the attacks.

"The attacks were the same for them," he wrote.

"They have decided they want to bring joy to the French people who experienced those events.

"They want to give happiness. Deschamps has given them this desire to make people happy. They know that this isn't just any ordinary moment in time," Hollande said.

Organisers had even prepared a bus for a victory parade with "Thanks" on the back and "European Champions 2016" on the side, according to video taken by a motorist who spotted it on a main road into Paris before Sunday's final.

Victory would have been "good for France after the attacks to have revenge against the Islamists and all the lows we've had recently," said 18-year-old Shanel Aoudi, a barmaid in Paris.

"We would have put all that aside," said Elliot Fromentin, 20, tears in his eyes after the bitter defeat.

Before attending the final, Hollande admitted that reality would eventually crowd in even if France had won.

"Sport allows people to come together but politics divides people," the president said.

"The Euro sweeps away everything else, it brings people together, but life will resume afterwards."

Hollande has recorded some of the lowest popularity scores for a post-war French president, but the Socialist might still stand for re-election next year.

"I support the French team, I go to all their matches but I don't want to use sport for politics. That's not good for sport or for politics," the president said.