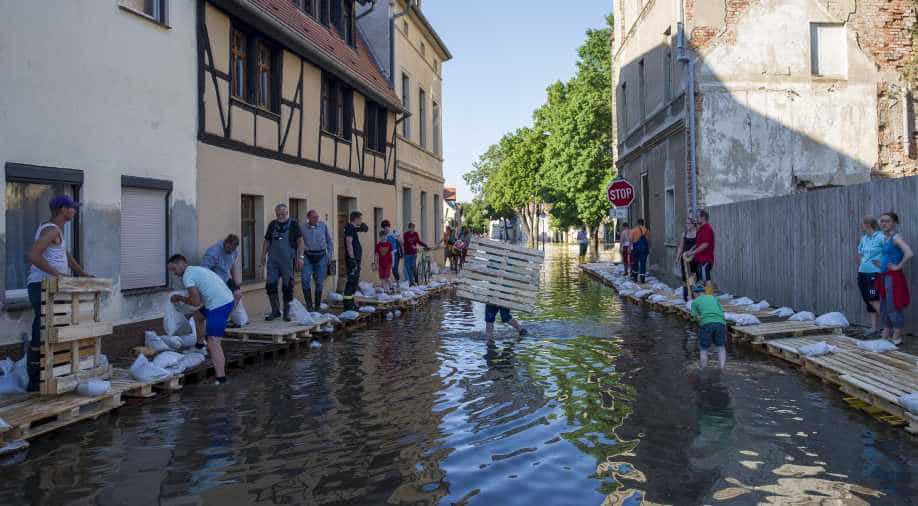 One of those killed was a 13-year-old girl who was hit by a train Sunday while seeking shelter from the rains under a railway bridge.
A boy, 12, who was with her was not physically injured but had to receive trauma counselling, said police in the southern city of Aalen.

In Schwaebisch Gmuend near the city of Stuttgart, a volunteer firefighter died on Sunday trying to rescue a man trapped in a shaft of a flooded railway station, municipal authorities said.
The man who was trapped was also presumed dead although neither body has been recovered, according to local police.

In Weissbach, just to the north, a 60-year-old man died in a flooded underground garage on the same day.

The regional authorities in the state of Baden-Wuerttemberg put the number of injured at around 10.

A number of people had to be rescued from cars trapped in the floods.

National news agency DPA said a river broke its banks in Braunsbach, destroying one house and damaging several others.
Eyewitnesses posted videos on social network sites showing cars being carried away by the floods and crashing into shop windows.

The head of one rural district in Schwaebisch Hall, Michael Knaus, said that more rain fell in the space of a few hours than normally falls over several months.

State authorities said that as many as 7,000 firefighters, police and rescue workers were called out in some 2,200 incidents.
Read in App