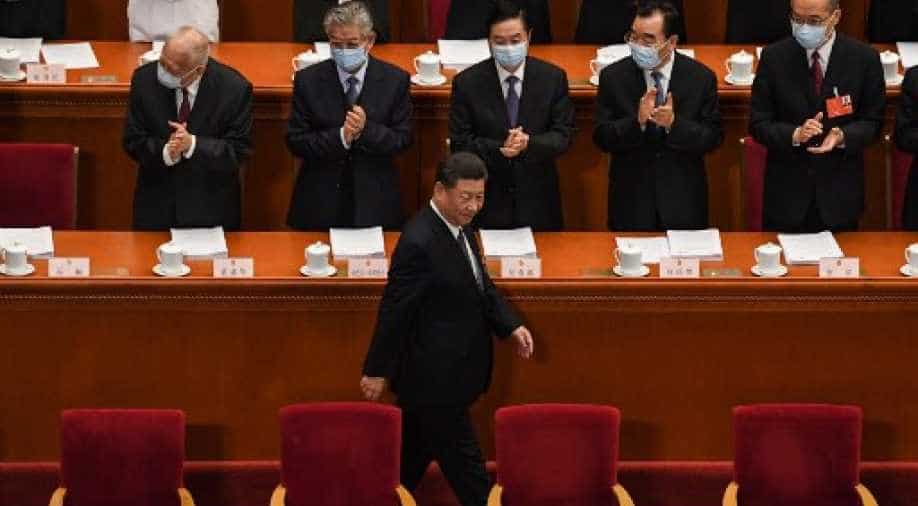 Chinese President Xi Jinping (C) arrives for the opening session of the National People's Congress at the Great Hall of the People in Beijing Photograph:( AFP )

One country, one party, and one system - that's the new mantra for the Communist Party which is the absolute power centre of China.

The annual gathering of the ruling elite of China took place today which is the country's biggest political event of the year.

The Communist Party uses the event to declare its agenda for the year. It was supposed to take place in March but got delayed due to the Wuhan virus. Two months later, China hastily put together the event, just to show the world they have the COVID-19 outbreak under control.

Today was day one and China has been facing pressure on many fronts, so the Communist Party decided to put up a show of strength as Chinese premier Li Keqiang opened the session.

One country, one party and one system - that's the new mantra for the Communist Party which is the absolute power centre of China.

A party whose lapses gave the world a pandemic now wants to strengthen its grip beyond mainland China.  It is the premier, not the president who speaks even as President Xi Jinping was seated during the entire affair. Premier Li delivered what is called the government's work report. It was basically the agenda of the Chinese government for the year.

There are five big takeaways from today. Firstly, China declared victory against the coronavirus. Two, a controversial new law to control Hong Kong, three, no GDP targets for this year, four, a hike in China's defence budget and finally, the promise of big spending.

However, all the announcements carry one underlying message - the Communist Party is in charge and, its agenda has not been derailed by the coronavirus. The first big takeaway: China has declared victory against the Wuhan virus outbreak.

Premier Li said China has achieved a decisive victory against the disease. Clearly, it is propaganda. China is still fighting the coronavirus since there are fresh wave of cases. Another province was put under lockdown this week. China is just trying to look strong by saying it defeated the virus.

Takeaway number two: China will tighten its grip on Hong Kong. The plan is to impose a new law. It comes with sweeping security measures which allow Beijing greater control over Hong Kong and power to crackdown on anti-government protests.

There was also a message for Taiwan. The Chinese premier dropped the word "peaceful" while referring to the reunification of Taiwan. The message is clear - China wants to curb the autonomy of Hong Kong and Taiwan and it won't hesitate to use force.

Takeaway number three: For the first time since the 1990s, China won't set a GDP target. Beijing can't make a prediction yet after the Wuhan virus destroyed businesses and disrupted supply chains and brought the world to a grinding halt.

China says it is difficult to put a number to the growth right now. Mainly because of the uncertainly in the foreign markets. A situation that was created by the virus from China.

Now, China wants to capitalise. So, it will issue bonds worth one trillion yuan to raise money China is setting aside $179 billion to spend on defence that budget is nearly three times India's defence budget.

Despite the coronavirus hit on the Chinese economy, China has given its defence budget a hike. It is higher by 6.6 per cent compared to last year. Chinese defence forces have remained active despite the pandemic. They have stepped up their activities in the South China Sea and are also active in Taiwan, including along the border with India.

It seems the virus has only added to China's military aggression and this budget only shows that Chinese defence forces will remain proactive.

China wants to create more than nine million jobs. Last year's target was around 11 million. So, job creation target has dropped by two million. For the first time, there has been no news about treasury bonds. China plans to raise money and spend it to revive the economy.

China's economic data is world famous for its unreliability but its banks are under pressure because of debts.

To sum up, the National People's Congress was high on slogans and low on substance. The military budget gets a boost, but growth may not take off. China is still struggling to control its virus, but it wants to focus more energy on controlling Hong Kong and Taiwan.

As a leader who is facing the biggest political test of his career, both at home and abroad, Xi Jinping's positioning is clear - he wants to say that his plans are on course and that he is completely in control of the situation. The world must brace for a more aggressive and an abrasive China.