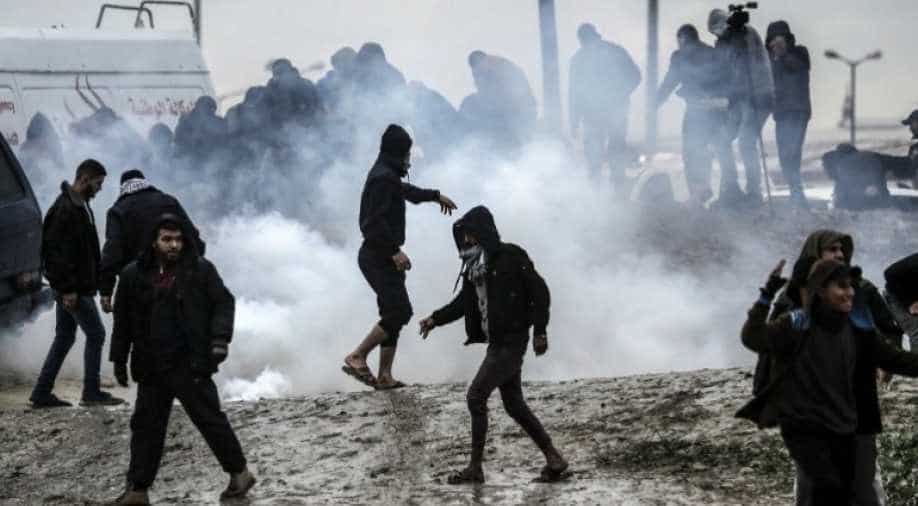 Palestinian protesters walk in the mud and through tear gas fumes during clashes. Photograph:( AFP )

'An army attack helicopter targeted a Hamas military position in the south of the Gaza Strip,' an army statement said.

An Israeli aircraft hit a Hamas position in the Gaza Strip late on Friday in response to the first fire from the territory since a November flare-up, the military said.

"An army attack helicopter targeted a Hamas military position in the south of the Gaza Strip," an army statement said.

It said it had responded after a "launch towards Israel" that Israeli media said was a rocket.

Gaza's Islamist rulers Hamas said the Israeli aircraft fired two missiles which damaged one of their positions but caused no casualties.

It was the first rocket fire from Gaza since an Egyptian-brokered ceasefire announced on November 13 ended the worst flare-up around the territory since a 2014 war.

In the space of 48 hours, hundreds of rockets and mortar rounds were fired into Israel, killing one person and wounding 27.

The barrage followed a botched Israeli commando raid which killed a Hamas commander and six other militants as well as an Israeli officer.

Seven Gazans were killed and 26 wounded in retaliatory Israeli air strikes before the ceasefire took effect.

Israel and Palestinian militants in Gaza have fought three wars since 2008, and mass protests along the border since March 30 have triggered deadly clashes with the Israel army that have raised fears of a fourth.

During a protest on Friday, Israeli fire killed Karam Fayyad, 26, on the border east of the city of Khan Yunis, the Gaza health ministry said.

At least 240 Palestinians have been killed since the demonstrations began, most of them by Israeli fire during border clashes but also by air and tank strikes.