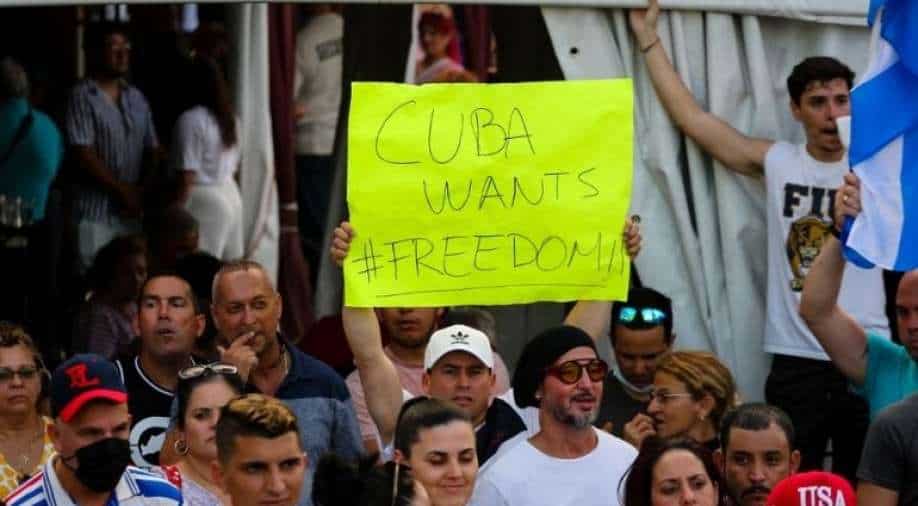 People demonstrate, some holding placards, during a protest against the Cuban government. Photograph:( AFP )

The island is facing one of its greatest socioeconomic crises since the Soviet Union collapsed as well as a rise of deadly coronavirus outbreaks.

Cuba has restricted access to social media and messaging platforms including Facebook and WhatsApp, global internet monitoring firm NetBlocks said on Tuesday, in the wake of the biggest anti-government protests in decades.

Thousands of Cubans joined demonstrations throughout the Communist-run country on Sunday to protest a deep economic crisis that has seen shortages of basic goods and power outages. They were also protesting the government`s handling of the coronavirus pandemic and curbs on civil liberties.

Cuba`s government has said the demonstrations were orchestrated by counter-revolutionaries financed by old Cold War foe the United States, manipulating frustration with an economic crisis largely caused by the decades-old U.S. trade embargo.

The protests, rare in a country where public dissent is tightly restricted, had largely ended by Sunday evening, as security forces were deployed to the streets and President Miguel Diaz-Canel called on government supporters to go out and fight to defend their revolution.

But another protest flared late Monday in the southern Havana suburb of La Guinera, where one man died and several others, including members of the security forces, were hospitalized with injuries, according to state-run media on Tuesday.

It did not say what caused the death. No other deaths and injuries have been officially confirmed so far.

Hundreds had taken to streets in La Guinera, shouting slogans like `down with communism,` and `freedom for the people of Cuba,` according to two residents and video footage seen by Reuters. Some started throwing rocks at security forces who eventually responded with gunfire, said resident Waldo Herrera, 49.

"I think the Communists have lost control, they won`t have a solution to this situation," he said. "The people are tired of so much humiliation, so much repression."

They also accuse the government of trying to disrupt communications. Introduced just over two years ago, mobile internet has been a key factor behind the protests, giving Cubans more of a platform to express their frustrations and enabling the word to get out quickly when people are on the street.

In the capital, there have been regular and atypical mobile internet outages since Sunday, according to Reuters witnesses.

"The pattern of restrictions observed in Cuba indicate an ongoing crackdown on messaging platforms used to organize and share news of protests in real-time," said NetBlocks director Alp Toker. "At the same time, some connectivity is preserved to maintain a semblance of normality."

Asked whether the government was intentionally restricting internet connections, Foreign Minister Bruno Rodriguez told a news briefing the situation was "complicated." He said power outages could impact telecommunications services and "Cuba would never renounce the right to defend itself."

"Our weapon is the internet. If they take away the internet we are unarmed," said Havana resident Gino Ocumares, as he tried but failed to connect to the web at a government Wi-Fi hotspot. "The government does not want people to see the truth."

The protest in La Guinera was spearheaded by "antisocial and criminal elements" that had tried to reach the police station with the aim of attacking its officials and damaging infrastructure, said The Cuban News Agency.

When security forces stopped them, they vandalized homes, set containers on fire, and damaged the suburb`s electricity wiring, attacking officials with stones and other objects, the agency said.

State-run media also reported on Tuesday that Raul Castro, who stepped down as head of the ruling Cuban Communist Party in April, attended a meeting on Sunday of the political bureau to address the "provocations."

Diaz-Canel said in April he would continue to consult Castro on matters of utmost importance.

Counter-rallies of government supporters have been taking place. Around 100 supporters carrying the Cuba flag gathered in the Vedado business district of Havana on Tuesday.

The Cuban Bishops Conference said in a statement it was worried that the response to protests over legitimate concerns would be "immobilism" rather than an attempt to resolve them, and even a counterproductive hardening of positions.

During or following the biggest wave of protests on Sunday, nearly 200 people were arrested, according to exiled rights group Cubalex, adding that only 19 had been confirmed released so far.

"In the multiple interrogations, we made it clear that no one was directing us from abroad to take to the streets, that no one paid us a cent to do what we did," theater director Yunior Garcia, who was arrested at a protest in Havana on Sunday, wrote on his Facebook page.

He said he was released on Monday but police officials told him he remained under investigation.

Reaction to the protest in Latin America split along ideological lines, with Mexico`s president blaming the U.S. embargo for fomenting the unrest, while Chile and Peru urged the government to allow pro-democracy protests.

U.S. President Joe Biden said on Monday that the United States "stands firmly with the people of Cuba as they assert their universal rights."

State Department spokesman Ned Price called on the Havana government to open all means of communication, both online and offline.

"Shutting down technology, shutting down information pathways - that does nothing to address the legitimate needs and aspirations of the Cuban people," Price told a news briefing on Tuesday.