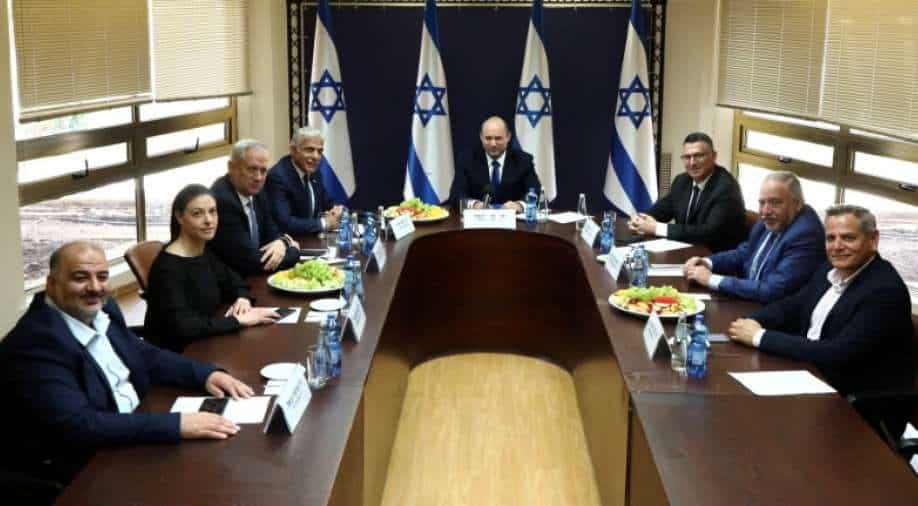 Israel's new government, due to be sworn in on Sunday, consists of a hodgepodge of political parties that have little in common other than a desire to unseat veteran right-wing Prime Minister Benjamin Netanyahu.

The coalition spans the far-left to the far-right and includes for the first time a small Islamist faction representing Israel's Arab minority.

It is expected to focus mostly on economic and social issues rather than risk exposing internal rifts by trying to address major diplomatic issues such as the Israeli-Palestinian conflict.

Here are the people who will be leading the new government:

Bennett leads the ultranationalist Yamina (Rightwards) party that champions Jewish settlement in the occupied West Bank. He made a fortune in Israeli high-tech before entering politics in 2013. He served in previous Netanyahu-led governments, most recently as defence minister.

Now Bennett says he is joining with opponents to save the country from a period of political turmoil that could otherwise see the fifth election in just over two years. A plan he has floated to annex much of the West Bank seems unfeasible, given his new partners. He opposes the creation of an independent Palestinian state.

Under the coalition deal, Bennett will serve as prime minister for two years and until he is replaced by Yair Lapid. He will be the country's first leader to wear a kippah, a skullcap worn by Orthodox Jews.

Lapid heads the centrist Yesh Atid (There is a Future) party and was the architect behind the new government. His party is the biggest in the coalition but he agreed to share power with Bennett to secure a parliamentary majority.

He quit his job as a TV anchor in 2012 and formed his own party, running on the promise to ease financial pressures on the middle-class. He also seeks to end many of the state-funded privileges enjoyed by ultra-Orthodox Jews, a long-running source of grievance to many secular Israelis.

He initially served as finance minister before moving to the opposition, which he led until Sunday.

Lapid will serve as foreign minister for two years and then take over as prime minister until the end of the government. If it lasts that long.

But he agreed to join Netanyahu in a "unity" government, a decision that angered many of his supporters.

He will be a part of the new coalition, remaining in the post of defence minister.

A far-right immigrant from Moldova who lives in an Israeli settlement in the occupied West Bank, Lieberman has been a political wildcard over the past decade. He has joined Netanyahu governments, including as defence minister, but also quit.

As finance minister, he will have to rein in a budget deficit that ballooned during the coronavirus crisis.

He has also said he will try to change the status quo between the government and Israel's politically powerful ultra-Orthodox minority, which is a mainstay of Netanyahu's outgoing government.

The ultra-Orthodox community has low participation rates in the workforce and relies heavily on government handouts while focusing on religious studies. Lieberman has said he will work to integrate them more into the economy.

Saar was Netanyahu's main rival within Likud, but Netanyahu did his best to keep him out of the spotlight and away from the highest-level portfolios. Frustrated, Saar launched a failed leadership bid then spun off his own party.

As head of the New Hope party, Saar will be bumped up to the justice minister, where he will oversee the legal system and become a member of the security cabinet.

Abbas's small United Arab List will be the first party in an Israeli government to be drawn from Israel's 21% Arab minority - Palestinian by culture and heritage, but Israeli by citizenship.

He split with other Arab politicians who prefer to remain outside government and cast aside differences with Bennett and other right-wingers to tip the scales against Netanyahu.

Abbas is expected to serve as a deputy minister in the prime minister's office. He aims to negotiate a big increase in government spending in Arab towns and villages.

But his presence is a potentially destabilising factor. He has been criticised by Palestinians for agreeing to support an Israeli government while Israel continues to occupy the Palestinian territories. Addressing these tensions, Abbas told the Italian daily La Repubblica on Friday: "There will be difficult decisions to be made, including security decisions. We have to juggle our identity as Palestinian Arabs and citizens of the State of Israel, between civil and nationalistic aspects."