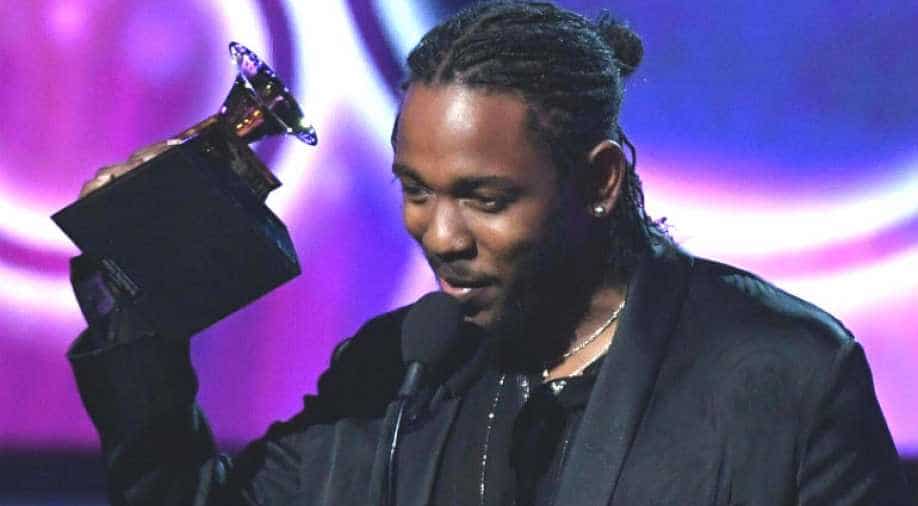 Kendrick Lamar receives the Grammy for the Best Rap Album with DAMN. during the 60th Annual Grammy Awards show on January 28, 2018, in New York. Photograph:( AFP )

Kendrick Lamar took the Grammy Awards by storm on Sunday, winning five early awards and opening the show with a politically charged performance that brought the audience to its feet.

Lamar, 30, regarded as one of the most innovative rappers of his generation, kicked off the program in New York with dancers dressed in military fatigues against the backdrop of an American flag.

The performance earned cheers and a standing ovation from the audience at Madison Square Garden.

"It`s really about expressing yourself and putting that paint on the canvas for the next generation," Lamar said. "Hip-hop has done that."

He thanked Jay-Z, 48, and other veteran hip-hop artists for showing him the way, adding "Jay for president!"

R&B singer Bruno Mars also had a good night, winning three early Grammys for his album "24K Magic" and hit single "That`s What I Like."

Alessia Cara was named best new artist. "I`ve been pretend-winning Grammys since I was a kid in my shower," she said, accepting the award.

Jay-Z, who bared his soul on his "4:44" album, was not expected to perform on Sunday in a departure from Grammy tradition.

The Los Angeles Times quoted Grammy organizers as saying that Jay-Z, who was in the audience on Sunday, had turned down an invitation to perform.

He is competing against Lamar, Mars, Childish Gambino and New Zealand-born singer-songwriter Lorde for album of the year in a test of whether hip-hop can break a 14-year dry spell and win that top prize.

On the red carpet, dozens of musicians wore or held white roses to signal support for women`s equality and freedom from sexual harassment.

Inside the venue, pop singer Kesha, who has been battling her former record producer Dr. Luke for years in U.S. courts over allegations of emotional and sexual abuse, is to perform her defiant single "Praying." Dr. Luke has repeatedly denied Kesha`s allegations.

Cara, Khalid and Logic will take the stage with a group of suicide survivors to perform their song "1-800-273-8255," the telephone number of the National Suicide Prevention hotline.

And country artists Brothers Osborne, Eric Church and Maren Morris, who appeared at the Las Vegas country music festival where 58 people were killed and more than 500 were wounded inOctober, will mark victims of violence at music events.

Mars, Jay-Z, Lamar and Gambino are also nominated for record of the year, but they faced strong competition from dance hit "Despacito" by Luis Fonsi, Daddy Yankee and featuring Justin Bieber. The single last summer broke records as the most-streamed global track of all time, with more than 4.6 billion plays across leading platforms.

British singer-songwriter Ed Sheeran, who was snubbed in the top album, record and song of the year categories, won two Grammys for his 2017 best-seller "Divide" and single "The Shape of You," but did not attend Sunday`s ceremony.