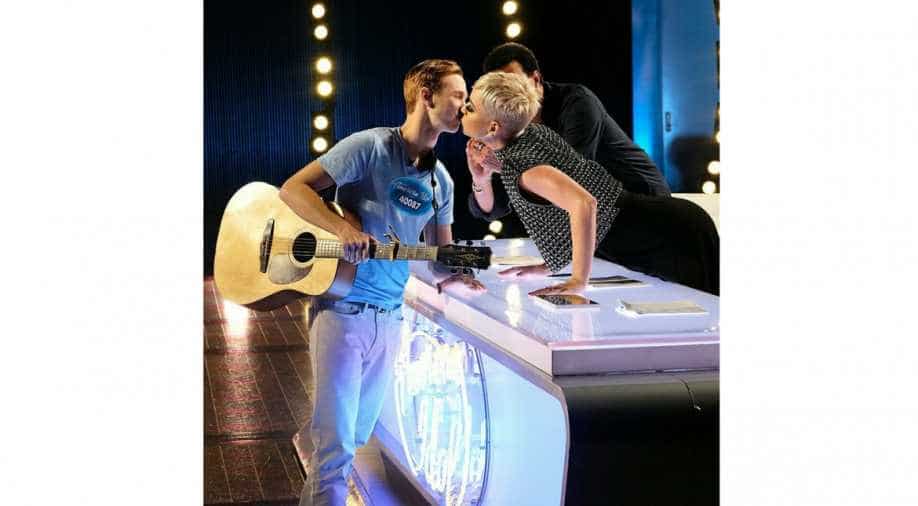 Singer Katy Perry is being called out for planting a peck on a 19-year old contestant's lips on American Idol. Photograph:( Twitter )

Katy Perry has landed herself in controversy after she kissed a 19-year-old contestant while auditioning for American Idol. The contestant Benjamin Glaze stated he was not exactly thrilled about the kiss but later clarified that he didn't think was sexually harassed by the singer.

During Glaze's audition, fellow judge Luke Bryan joked around with the contestant and referenced Katy's song "I Kissed a Girl".

Glaze then revealed that he had never kissed a girl before and would not do that without being in a relationship.

Perry then called Glaze over to the table motioning for a kiss. Glaze asked, "One on the cheek?" and gave her a kiss on the face but the singer quickly planted one on his lips. After his audition, Glaze told the New York Times in an interview that he was not exactly thrilled about the kiss.

"I was a tad bit uncomfortable. I wanted to save it for my first relationship. I wanted it to be special. Would I have done it if she said, 'Would you kiss me?' No, I would have said no," he had said.

"I know a lot of guys would be like, 'Heck yeah!' But for me, I was raised in a conservative family and I was uncomfortable immediately. I wanted my first kiss to be special," Glaze had said.

The moment became viral on social media, with many people labelling it as a "forced sexual act".

Imagine if a 33 year-old male artist tricked a 19 year-old female auditioner into a kiss like Katy Perry just did with that teenage guy. Would we all think it was cute? #AmericanIdol

Hi just a friendly reminder that Katy Perry kissing this young man without his consent (he was saving his first kiss AND she tricked him into it) is a violation and assault! Joking about it is enforcing rape culture that tells us that men can’t be sexually assaulted. pic.twitter.com/CyIe64Y5eO

Anyone else watching Idol feel like Katy Perry pressured that poor kid into letting her kiss him on the cheek and violated him by planting one on his lips? Would not have been okay for a male celebrity to do to a young girl. #americanidol #katyperry #mencanbesexuallyharassedtoo

But Glaze has clarified that he did not feel sexually harassed by Perry in the audition, which was recorded earlier.

"I am not complaining about the kiss from Katy Perry at all. The way certain articles are worded is not done by me and my true intentions are not accurately represented in every article you read about the situation...

"I do not think I was sexually harassed by Katy Perry and I am thankful for the judges comments and critiques. I was uncomfortable in a sense of how I have never been kissed before and was not expecting it," he added.