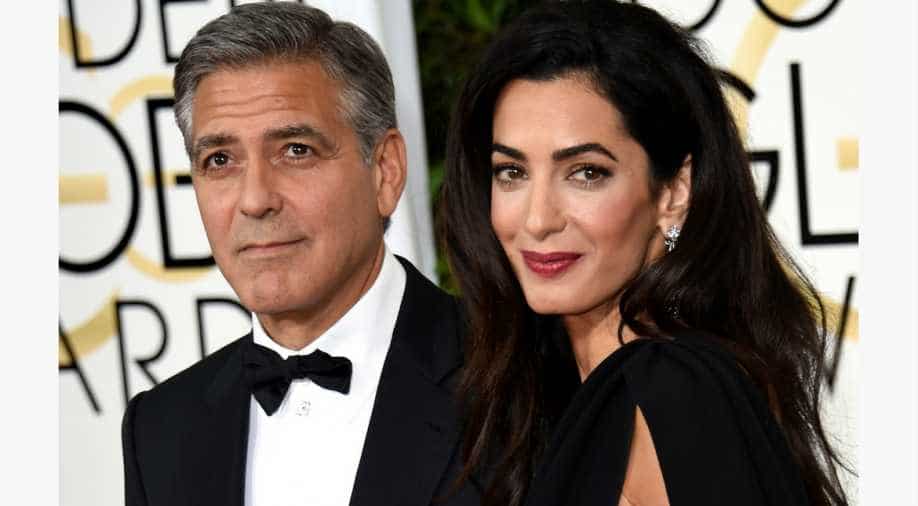 In the picture, George Clooney with wife Amal Clooney at the Golden Globes 2015. Photograph:( Pinterest )

People might find it hard to meet their soul-mates when they are single, but for George Clooney, he was able to meet his future wife Amal Clooney without even leaving the comfort of his home.

The 56-year-old actor has opened up for the first time with the story of how he met the love of his life in a clip from `My Next Guest Needs No Introduction with David Letterman`, which starts on Netflix February 9.

According to the Hollywood Reporter, Clooney recalls how a mutual friend asked to bring Amal on a visit to Clooney`s house.He said, "I didn`t leave the house. No, it`s the wildest thing.

A mutual friend of ours said, `I`m stopping by and can I bring my friend?` And I was like, `Of course`." While George knew nothing about the mystery friend before she arrived, his agent did, and warned him not to blow it."I got a call from my agent who said, `I met this woman who is coming to your house, who you`re going to marry. It really worked out that way," noted Clooney.

To which, Letterman jokes, "So, now this was arranged by an agent, your talent agent had done all the paperwork ahead of time."Despite an instant attraction, the `Money Monster` star admitted that it took some time for the romance to kick in.

"The funniest thing was my mum and dad were visiting so my parents were there. And we just talked, we stayed up all night talking. And I got her email address because she was going to send me some pictures of my parents. So we started writing. I didn`t know if she wanted to go out with me - I just thought we were buddies," explained Clooney.

The pair stayed in contact through emails, and three months later, George invited Amal to visit him in London where he was working on the sound for `Monuments Men`."That was a good first date," George revealed.

During an interview with The Hollywood Reporter last year, the star revealed details of his romantic proposal in early 2014."Over champagne, after dinner, I told her there was a lighter to light the candle in the drawer, and she reached back and pulled out a ring. And she just kept staring at the ring, going, `Oh, my God`."

The couple married in a star studded ceremony in Venice, Italy, in 2014, before the pair welcomed their twins in 2017.