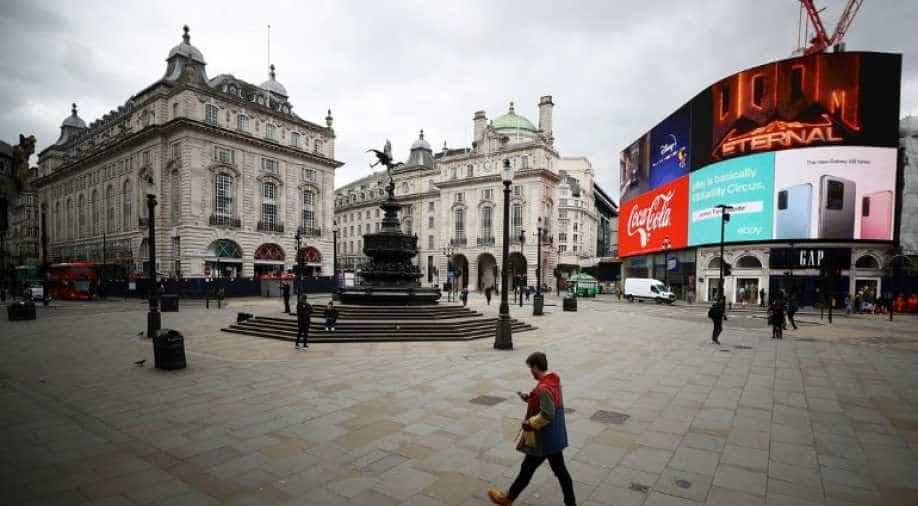 The UK allowed shops and officer to reopen few weeks back to save its falling economy. However, the reopening of he economy, coupled with the protests happening in the country, some experts fear a second wave of coronavirus in the country. These fears further aggravated as the UK government decided to scrap the social distancing rule, even after facing criticism from the health experts. Photograph:( Reuters )

Britain has been among the worst-hit countries by the pandemic, with the number of suspected and confirmed COVID-19 deaths passing 50,000 last week

Leisure sites such as drive-in cinemas, safari parks and the outdoor parts of zoos will now be able to reopen, while places of worship are also set to swing open their doors again for individual prayer.

All sites will need to comply with social distancing rules requiring people to keep at least two metres (six feet) apart and advising them to wear face coverings such as masks or scarves when indoors.

Meanwhile, the coverings will be compulsory on public transport across England from Monday, with operators allowed to bar travel to those not wearing them.

"It's a slightly different experience... but it is a safe environment and we should all be able to go out knowing that we should be able to shop in confidence," he told Sky News.

Non-essential shops in Northern Ireland reopened Friday, but Scotland and Wales have not yet decided when to follow suit, as Britain's devolved governments lift restrictions at different speeds.

The non-essential retail sector employs 1.3 million people and contributes £46.6 billion ($58.4 billion, 52 billion euros) to the British economy annually, according to the finance ministry, and its restart is viewed as economically vital.

Streets have been cleaned, footpaths widened and hand-sanitising stations installed in London's West End commercial district ahead of Monday.

But Jace Tyrrell, CEO of New West End Company, a partnership of 600 British and international operators in the area, predicted it will be "quite some time until we get back to normal".

"Retailers are going to have to adapt," she told AFP.

Britain has been among the worst-hit countries by the pandemic, with the number of suspected and confirmed COVID-19 deaths passing 50,000 last week, according to official statistics.

The government's less comprehensive rolling daily death count of those who have tested positive for the virus stands at nearly 42,000.

Despite the grim tolls, the transmission rate has dropped dramatically since the pandemic's peak in Britain in early April.

But the lockdown that helped turn that tide shrank the economy by one-fifth that month, official data showed Friday, stoking fears of a painful recession.

The OECD last week predicted the British economy was on course to shrink by more than 11 per cent in 2020 because of COVID-19.

Prime Minister Boris Johnson, who has faced heavy criticism over his handling of the crisis, has set out a phased lifting of restrictions.

Outdoor markets and car showrooms reopened at the start of the month, when some younger children also returned to schools.

But his government drew ridicule last week after conceding it could not deliver on a plan to have all primary school children back for a month before the summer holidays.

Johnson has delayed reopening pubs and restaurants, the next stage in easing, until July 4 at the earliest.

Relaxing social distancing from the current two-metre requirement is seen as the only way for most of those businesses to operate viably, with proponents of easing the rule noting that other countries are adopting smaller distances.

Johnson confirmed Sunday he will review the measure as he faces growing pressure to ease it.

"You start to build some more margin for manoeuvre and we'll be looking at that and we'll be keeping it under constant review as we go forward to the next step in our plan," he said during a visit to a shopping centre in east London.

But he added: "What I don't want to do is sacrifice the huge efforts of the British people in beating this disease."