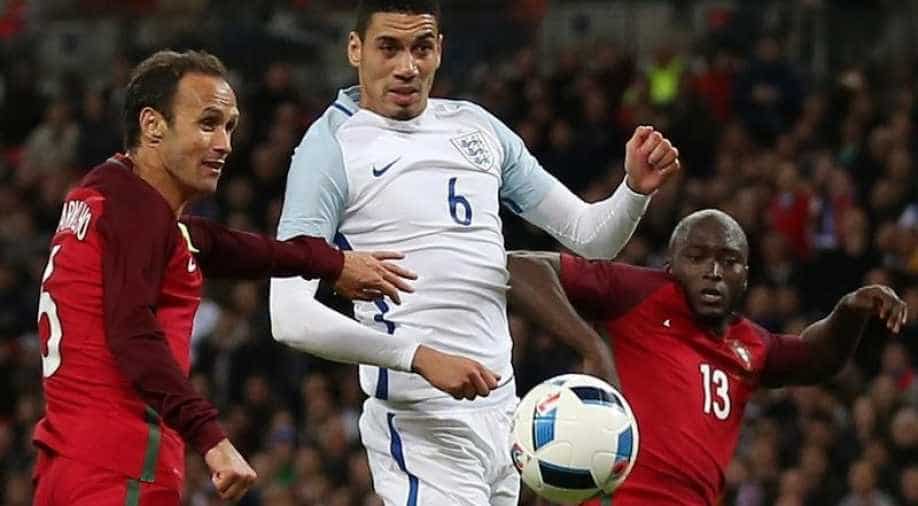 Follow Us
England defender Chris Smalling headed in the only goal with five minutes left as they beat 10-man Portugal 1-0 in a turgid Euro 2016 warm-up match at Wembley on Thursday.

The Manchester United centre half nodded the ball home from substitute Raheem Sterling's left-wing cross after the visitors failed to adequately clear a free kick by Kyle Walker.

Portugal, who rested striker Cristiano Ronaldo, had centre half Bruno Alves sent off for a reckless aerial challenge on Harry Kane in the 35th minute.

"I thought in the second half we played some very good football and I thought especially in the last 30 minutes, after we made changes and brought on some fresh legs, that we looked good."

The crowd, which included newly-appointed Manchester United manager Jose Mourinho, had to wait until the 23rd minute for the first effort on goal, a tame header from England captain Wayne Rooney easily saved by Rui Patricio.

Twelve minutes later Alves received a straight red card after catching Kane with a dangerous blow on the side of the head from his flying boot.

There was no sign England were playing with a one-man advantage as Portugal completely dominated possession at the start of the second half.

Equally frustrating for the home fans was the sight of chief goal threat Kane taking the corners and set pieces until he was substituted in the 78th minute.

"Our composure throughout the game was good," added Hodgson as he accentuated the positives. "As a preparatory game it would have been better if we had played against 10 men but I'm pleased we kept a clean sheet and never looked like conceding a goal."

Portugal defender Jose Fonte said his team would benefit from their Wembley outing.

"We are disappointed obviously but we will come out of this stronger," said the Southampton centre half. "I thought we were compact and defended well.

"They didn't create many chances in the second half and we actually had two good chances to nick a goal."

England have been drawn in Euro 2016 Group B along with Wales, Russia and Slovakia while Portugal will meet Iceland, Hungary and Austria in Group F.

The Euros in France start on June 10.