Driver of truck found with 39 bodies appears in British court 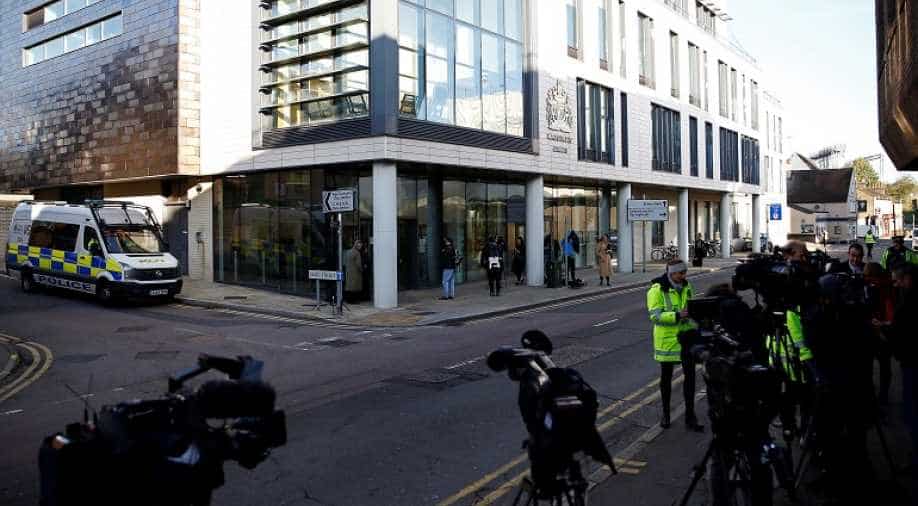 Members of the media are seen outside Chelmsford Magistrates' Court, in Chelmsford, Britain October 28, 2019. Photograph:( Reuters )

The discovery of 39 bodies in a refrigerated truck on an industrial estate east of London has shone a spotlight on the illicit global trade in people which sends the poor of Asia, Africa and the Middle East on perilous journeys to the West.

The driver of a truck in which 39 people were found dead appeared in a British court via video link on Monday charged with manslaughter and conspiracy to traffic people.

The discovery of 39 bodies in a refrigerated truck on an industrial estate east of London has shone a spotlight on the illicit global trade in people which sends the poor of Asia, Africa and the Middle East on perilous journeys to the West.

Driver Maurice Robinson, 25, appeared in Chelmsford Magistrates’ Court via video link, speaking only to confirm his name and address. He wore a grey sweatshirt.

"This involves a global ring facilitating the movement of a large number of immigrants into the UK," prosecution lawyer Ogheneruona Mercy Iguyovwe told the court.

Robinson made no application for bail. He was remanded in custody until November 25 when the case will continue at the Old Bailey, London's Central Criminal Court, and he will enter a plea.

The driver was arrested shortly after the grisly discovery of the bodies in the early hours of October 23 a few miles from the English port of Purfleet. The container had travelled from the Belgian port of Zeebrugge.

British police initially said the 39 dead were thought to have been Chinese but it later emerged that many were from Vietnam, where communities have been plunged into despair in the belief their missing loved ones are dead.

Police have said very few of the victims were carrying official identification and that they hope to identify the dead through fingerprints, dental records and DNA, as well as photographs from friends and relatives.

The Vietnamese government said Britain had sent dossiers regarding four of the people found in the truck, seeking help in identifying them.

Deputy Foreign Minister Bui Thanh Son told reporters: "The Ministry of Foreign Affairs is developing dossiers of possible victims, but until now there have been no grounds to confirm Vietnamese nationals are among the victims."

The suspected victims hail from Vietnam's northern rice-growing areas of Nghe An and Ha Tinh, two of the communist-ruled nation's poorest provinces.

Nhung's family said she first left Nghe An on her journey overseas in August. She went to China first, before eventually making her way to Germany, then Belgium, where they believe she boarded the ill-fated truck.

About 70 percent of Vietnamese trafficking cases in Britain between 2009 and 2016 were for labour exploitation, including cannabis production and work in nail salons, the British government said last year.

Nghe An was identified as home to many victims of human trafficking who end up in Europe, according to a March report by the Pacific Links Foundation, a U.S.-based anti-trafficking organisation.

The other province, Ha Tinh, was ravaged by one of Vietnam's worst environmental disasters in 2016 when a steel mill owned by Taiwan's Formosa Plastics contaminated coastal waters, devastating fishing and tourism there.