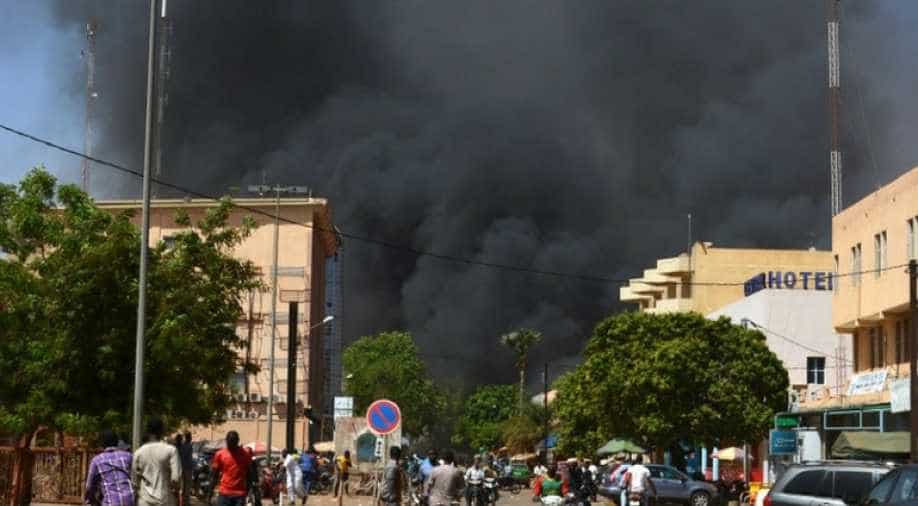 Dozens of people were killed Friday in twin attacks on the French embassy in Burkina Faso and the country's military headquarters, an assault that coincided with a meeting of regional anti-jihadist forces.

The government said the attack on the military was a suicide car bombing and that a planned meeting of the G5 Sahel regional anti-terrorism force may have been the target.

Officials from Burkina Faso, Chad, Mali, Mauritania and Niger were at the meeting, representing the G5 Sahel nations who have launched a joint military force to combat jihadists on the southern rim of the Sahara.

Eight members of the armed forces were killed by the blast and the parallel attack on the French embassy, while 80 were wounded, said Security Minister Clement Sawadogo. The minister said eight attackers had been shot dead.

"The vehicle was packed with explosives" and caused "huge damage", Sawadogo said, adding that it was a suicide attack.

Three security sources, two in France and one in West Africa, told AFP that at least 28 people were killed in the attack on the military HQ alone.

French government sources said there were no French casualties and described the situation in Ouagadougou as "under control".

"Our country was once again the target of dark forces," President Roch Marc Christian Kabore said in a statement.

The violence began mid-morning when heavy gunfire broke out in the centre of the Burkinabe capital.

Witnesses said five armed men got out of a car and opened fire on passersby before heading towards the French embassy.

At the same time, the bomb went off near the headquarters of the Burkinabe armed forces and the French cultural centre, about a kilometre (half a mile) from the site of the first attack, other witnesses said.

Sawadogo said the G5 meeting was supposed to have been held at the headquarters but had been moved to another room.

"Perhaps it was the target. We do not know at the moment. In any case the room was literally destroyed by the explosion," the minister said.

The G5 Sahel's completed force will be composed of 5,000 troops and aims to be fully operational by the end of the month.

It has already carried out operations against jihadist fighters with help from the French army.

Mahamadou Issoufou, Niger's president and the current chair of the group, said Friday's attacks "will only strengthen the resolve of the G5-Sahel and its allies in the fight against terrorism".

French President Emmanuel Macron telephoned his Burkinabe counterpart Kabore to express solidarity and send his condolences to the families of the slain security force members, his office said.

Macron, who made a high-profile visit to Burkina Faso in November, said the attacks "illustrate once more the threat weighing on the entire Sahel region".

French foreign minister Jean-Yves Le Drian said damage to the embassy was minor, and the mission would be able to resume normal operations "in two or three days".

Turkey's president Recep Tayyip Erdogan, who is on a visit to neighbouring Mali, "strongly condemned" the attack while UN chief Antonio Guterres called for an "urgent and concerted effort" to improve stability in the Sahel.

An interim UN report seen by AFP warned of a "growing threat" to the Sahel from two groups: the Islamic State in the Great Sahara (ISGS) and Ansar al-Islam.

There was no immediate claim of responsibility but Burkina Information Minister Remis Fulgance Dandjinou said the attack "has strong overtones of terrorism".

Burkina Faso has a history of military-backed coups as well as jihadist attacks.

The insurgency in the region has caused thousands of deaths, prompted tens of thousands to flee their homes and dealt crippling blows to economies that are already among the poorest in the world.

On August 13 last year, two assailants opened fire on a restaurant on Ouagadougou's main avenue, killing 19 people and wounding 21. No one has so far claimed responsibility for that attack.

On January 15 2016, 30 people -- including six Canadians and five Europeans -- were killed in a jihadist attack on a hotel and restaurant in the city centre.

That attack was claimed by the Al-Qaeda-linked Al-Murabitoun group, which was led by the one-eyed Algerian jihadist Mokhtar Belmokhtar.

A group called Al-Qaeda in the Islamic Maghreb (AQIM) also said some of its militants were involved.

France, the former colonial power in the Sahel region, has deployed 4,000 troops to support the G5 joint force.

On February 21, two members of the French counter-terrorism force were killed by a landmine near Mali's border with Niger and Burkina Faso. Twelve French soldiers have died since the campaign -- called Operation Barkhane -- was launched in August 2014.

The United Nations also has a 12,000-strong peacekeeping force in Mali called MINUSMA, which has taken heavy casualties. Four UN peacekeepers were killed by a mine blast on Wednesday in the centre of the country.