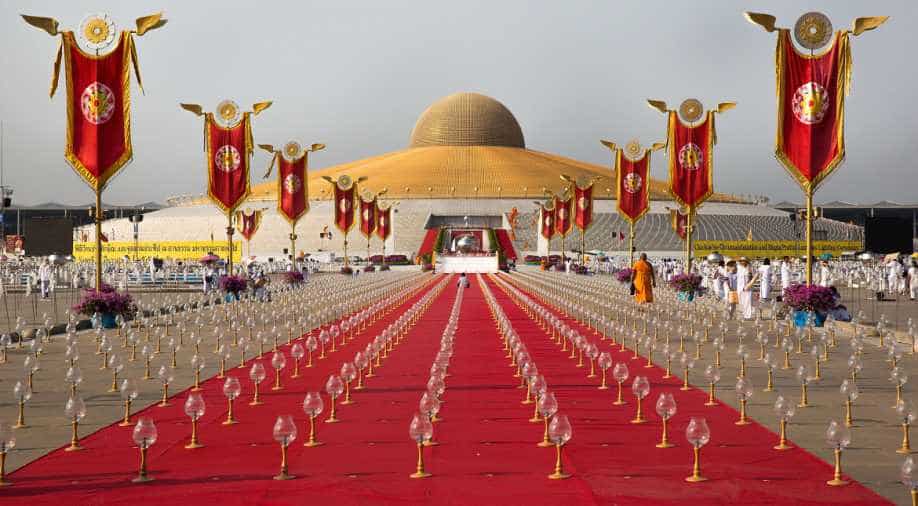 Revered Buddhist monks are often seen as untouchable and many Thais would frown upon police entering a temple by force Photograph:( Getty )

Hundreds of followers of an influential Buddhist leader in Thailand blocked investigators aiming to arrest the abbott on corruption charges at the Dhammakaya Temple north of Bangkok.

The abbot, Phra Dhammachayo, 72, is accused of conspiring to launder money by accepting cash stolen from a credit union.

The controversy over Dhammachayo, in part reflects more than a decade of divisive politics in Thailand, which has permeated all aspects of life, including Buddhism.

Many of his supporters suspect he has been targeted because of perceived links to political opponents of the military-dominated establishment.

Officials from the Department of Special Investigation (DSI) who turned up at Dhammachayo's Wat Dhammakaya temple complex found rows of followers sitting silently in the rain.

"We got in as far as we could, but were blocked by a group of devotees who, no matter what, would not let us get through," said DSI deputy chief police major Suriya Singhakamol.

The failed bid to enter the wealthy and influential temple was broadcasted live on national television.

Scores of riot police, who carried no weapons or batons, waited at a nearby government office but were not deployed.

Suriya said a police search warrant was only valid until 6 p.m. (1100 GMT) on Thursday.

He said he was "confident" the abbot remained inside the temple.

"This mission is not over. We still have the arrest warrant so the officials can still work with this warrant," Suriya added.

Citing ill health, the abbot failed to appear at a police station to answer graft charges in May.

The temple's spokesman said the abbott was still sick and he will not try to flee.

"Some of the devotees do not listen to anything and they insisted to ask mercy from the officials because Abbott Dhammachayo is still sick, and most importantly, he's not going to flee," said Phra Sanitwong Wutthiwangso, the temple spokesman.

His followers reject the accusations against him, saying the charges are politically motivated because of the temple's perceived links with populist former premier Thaksin Shinawatra.

Respected Buddhist monks are often seen as untouchable and many Thais would frown upon police entering a temple by force.

But others say the repeated failure to arrest the abbot is further proof of Thailand's culture of impunity - the ease with which the rich and powerful can get away with nearly anything.
(Reuters)