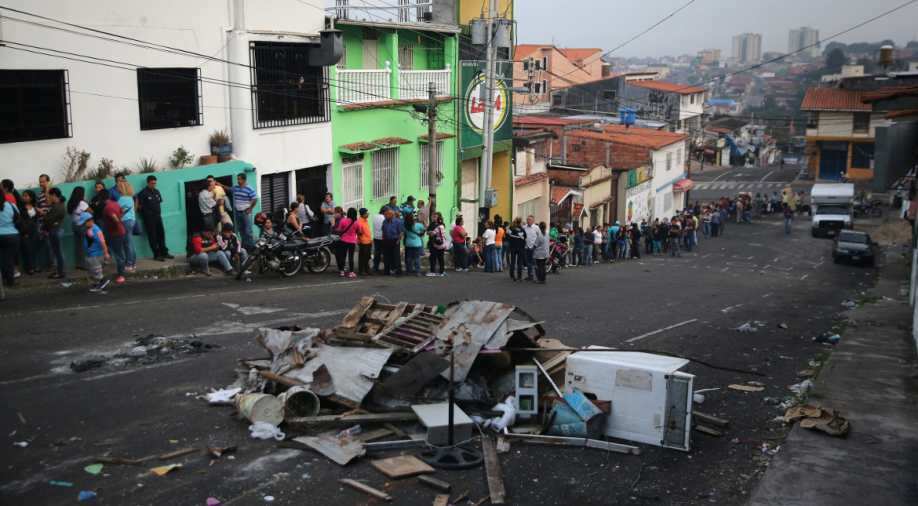 Human rights groups put the death toll from the latest wave of unrest at five, including a 42-year-old man they say died during the disturbances in Cumana. In photo: San Cristobal, the capital of Tachira state, Venezuela on March 8, 2014. Photograph:( Getty )

Venezuelan police have arrested hundreds of people as the country's food crisis erupted into deadly looting this week, heightening hardship and political uncertainty in the impoverished oil-producing nation.

Dozens of bakeries, supermarkets and hardware shops were looted on Tuesday in the eastern city of Cumana, the latest flashpoint in a crisis that has killed at least four people so far.

"It ended in total ruin because the businesses had not only their stock pillaged but also their furniture. It was total destruction," said Ruben Saud, president of the Cumana Chamber of Commerce.

The governor of Sucre state, where Cumana is located, told state television channel VTV that "more than 400 people" were arrested, including three suspected gang leaders involved in the looting.

Arrests have also been reported in other towns.

The opposition blames President Nicolas Maduro for an economic crisis in which Venezuelans are suffering shortages of basic foods and goods.

Maduro in turn blames the crisis on an "economic war" allegedly waged against his leftist government by the business elite.

He accuses the opposition of fomenting unrest to spark a foreign intervention to unseat him.

Maduro is resisting efforts from his centre-right opponents to remove him from office through a referendum, and warned he will not tolerate violence.

Late Thursday he announced his latest challenge to the opposition-controlled National Assembly.

He called on the Supreme Court to launch proceedings against the legislature for abusing its powers.

Maduro's ally in Sucre, Acuna, on Thursday accused the opposition of "sowing paramilitary values, such as hate and crime, in some citizens."

The army was sent in to keep order in Cumana after Tuesday's outbreak of looting, which erupted during a protest against food shortages.

Acuna said Cumana "has been returning to normal" since.

Elsewhere, a 17-year-old boy died after being wounded at a similar protest Wednesday in the western town of Lagunilla, authorities said.

Venezuela is suffering an economic crisis brought on by the plunge in global crude prices over the past two years. The country is heavily dependant on its oil exports.

At least four people have died in disturbances in recent days, according to the state prosecution service.

A soldier and a police officer were detained over two of the deaths, authorities said.

Human rights groups put the death toll from the latest wave of unrest at five, including a 42-year-old man they say died during the disturbances in Cumana.

There "most of the looting was organized by motorcycle gangs. Then the local people followed," said Estelin Kristen, leader of rights group Incide.

The Venezuelan Social Conflict Observatory recorded more than 250 looting incidents across the country in the first five months of the year. The number peaked in May.

Under emergency measures already in place, civilian groups have been assigned to hand out food rations door to door.

The opposition however says that the system favors Maduro's supporters.

The president has warned that he may decree emergency measures if confronted with actions amounting to a "violent coup."

Such measures would likely prevent the recall referendum taking place.

Rafael Uzcategui of human rights group Provea warned that the president's inflexibility could result in even worse tensions if he blocks the recall vote.

"What is currently preventing a general explosion of social unrest is the possibility that people can make their voices heard by means such as a referendum," he told AFP.

"Not allowing a referendum would unleash a very serious situation."
(AFP)