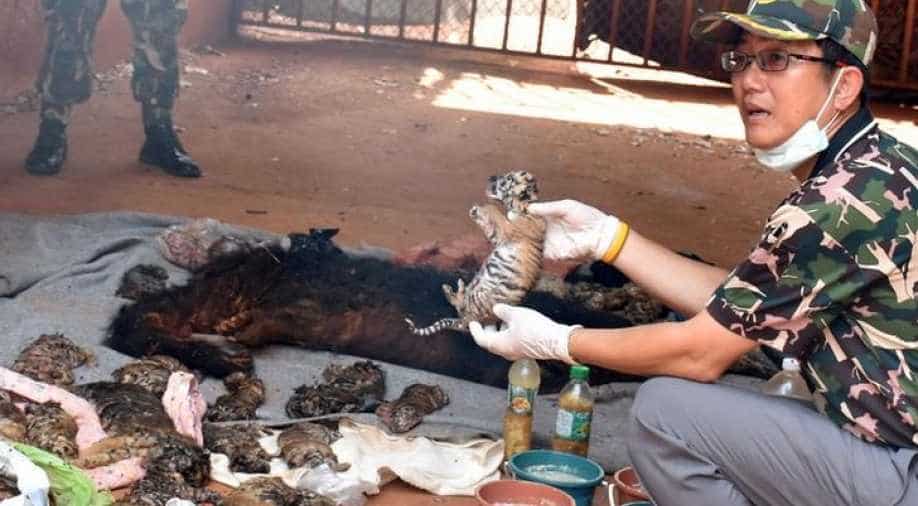 A dead tiger cub is held up by a Thai official after authorities found 40 tiger cub carcasses during a raid on the controversial Tiger Temple, a popular tourist destination in Kanchanaburi province, west of Bangkok, Thailand June 1, 2016. Photograph:( Reuters )

Thai wildlife authorities found 40 tiger cub carcasses in a freezer in Thailand's infamous Tiger Temple on Wednesday as they removed live animals in response to international pressure over suspected trafficking and abuse.

The Buddhist temple in Kanchanaburi province west of Bangkok had become a tourist destination where visitors snapped selfies with bottle-fed cubs.

But the temple has been investigated for suspected links to wildlife trafficking and abuse. A raid that began on Monday is the latest move in a tug-of-war since 2001 to bring the tigers under state control.

The 40 dead tiger cubs were found in a freezer in a kitchen area, said Adisorn Nuchdamrong, deputy director-general of the Department of National Parks.

"They must be of some value for the temple to keep them," he said. "But for what is beyond me."

Officials wearing protective masks displayed the bodies of the cubs to media at the temple. Also on display was the body of a Binturong, a protected species commonly known as a bearcat, which the authorities found with the cub carcasses.

Monks at the temple were not immediately available for comment.

Officials have moved 52 live tigers from the temple since Monday, Adisorn said, leaving 85 still there.

Thailand has long been a hub for the illicit trafficking of wildlife and forest products, including ivory. Exotic birds, mammals and reptiles, some of them endangered species, can often be found on sale in markets.

On Tuesday, the People for the Ethical Treatment of Animals group said the temple was "hell for animals" and called on tourists to stop visiting animal attractions at home and abroad.