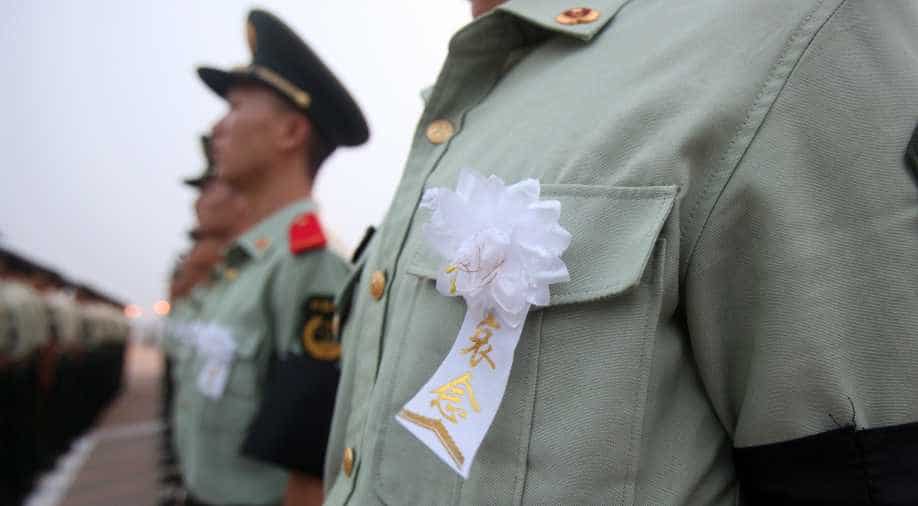 Soldiers wait for the return of the coffin containing the remains of Chinese guard Zhang Nan, who was killed in a terrorist attack in Somalia. Photograph:( Getty )

Follow Us
At least 16 people were killed and 55 were wounded in a car bomb and gun attack on a hotel in the centre of Mogadishu, where sporadic gunfire could be heard till today, said the Somalia police.

"So far we have confirmed 16 people, mostly civilians, died and 55 others were injured," said Major Nur Mohamed, a police officer.

He added that gunfire had died down at the hotel. "We suspect the roof top is not safe. Security forces are inside from the first to fourth floor."

Government forces have blocked all the main roads near the hotel.

A witness said sporadic gunfire could be heard at the five-storey building which has been extensively damaged.

Relatives gathered at hospitals and at the hotel, searching for their loved ones--some of whom are believed to be trapped inside.

Another witness heard a man on the fifth floor crying out for help.

Al-Shabaab was pushed out of Mogadishu by the African Union peacekeeping force, African Union Mission in Somalia (AMISOM), in 2011. But it has remained a potent threat in Somalia, launching frequent attacks aimed at overthrowing the Western-backed government.

Al-Shabaab has also been behind deadly attacks in Kenya and Uganda, both of which contribute troops to an African Union peacekeeping force in Somalia.