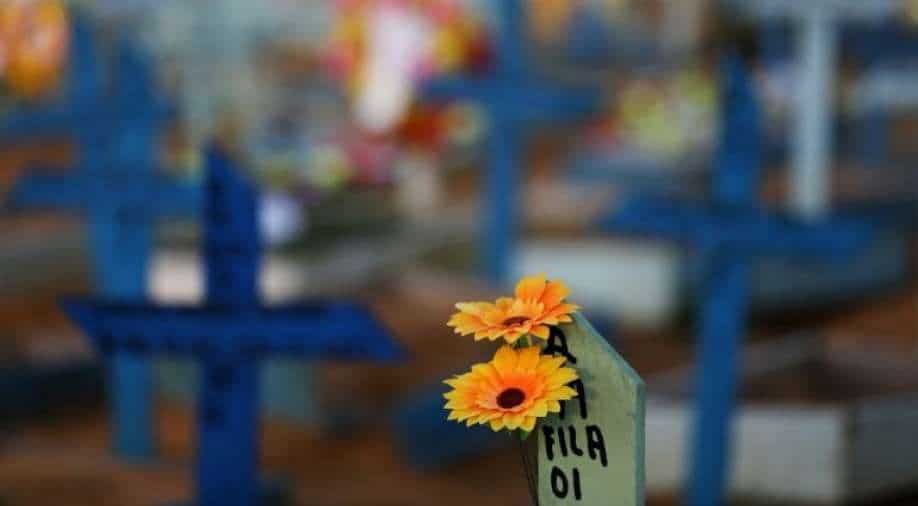 Flowers are seen on the grave of a person who passed away due to the coronavirus disease (COVID-19) at the Parque Taruma cemetery in Manaus, Brazil May 20, 2021 Photograph:( Reuters )

From the dusty highlands of Bolivia to the Brazilian metropolis of São Paulo, the pandemic has swamped underfunded healthcare systems after spreading fast across nations where many people survive hand-to-mouth and have been unable to enter lockdown

The death toll from COVID-19 in Latin America and the Caribbean passed 1 million people on Friday, according to a Reuters tally, with the pandemic worsening in the part of the world with the highest per capita death rate.

From the dusty highlands of Bolivia to the Brazilian metropolis of São Paulo, the pandemic has swamped underfunded healthcare systems after spreading fast across nations where many people survive hand-to-mouth and have been unable to enter lockdown.

In Peru, among the hardest hit nations in the region, COVID-19 patients have died in crowded hospital corridors of the capital Lima. Deep in the Amazon jungles of Brazil, many residents of the city of Manaus have died at home with no oxygen to fill damaged lungs, after supplies ran out there this year.

With cases falling in Europe, Asia and North America, and flat in Africa, South America is the only region where new infections are rising rapidly on a per capita basis, according to Our World in Data. Although India is currently struggling through one of the world`s worst outbreaks of the pandemic.

On average in May, 31% of the COVID-19 deaths in the world have been in Latin America and the Caribbean - home to just 8.4% of the global population.

Doctors and epidemiologists say the coronavirus pandemic took unprepared governments by surprise last year and its impact has been worsened by leaders who downplayed its gravity and failed to secure timely vaccine supplies.

The top eight countries registering the most COVID-19 deaths per capita over the past week were all in Latin America.

"Instead of preparing for the pandemic, we minimised the disease, saying the tropical heat would deactivate the virus," said Dr. Francisco Moreno Sanchez, head of the COVID-19 program at one of Mexico`s main hospitals and a critic of the government`s vaccination plan.

"Unfortunately, we are among the most-affected regions, where the handling of the pandemic has been the most mistaken, and now we are suffering the consequences," the epidemiologist told Reuters.

With the death toll steadily mounting, grave diggers in several countries have been forced to expand cemeteries with row after row of new tombs. In a break with the region`s predominantly Catholic traditional culture, dead are often buried with few or no relatives there to say goodbye.

Most of the deaths - more than 446,000 - have occurred in Brazil, which became a coronavirus epicenter this year with the second-deadliest outbreak outside the United States, though it appears likely to be surpassed soon by India.

The government of far-right Brazilian President Jair Bolsonaro, a vaccine skeptic and opponent of lockdowns, is being investigated by a parliamentary commission for failing to plan a national drive against COVID-19 and not buying vaccines in time.

Brazil remains the third most-affected country in the world in terms of confirmed COVID-19 cases, behind only India and the United States. It has the highest death toll in the region, followed by Mexico and Colombia, which combined represent about 74% of all the deaths Latin America.

The daily death toll in South America had slowed in May to 3,872, from an average of 4,558 people in April, according to a Reuters analysis. But cases are on the rise again and deaths are a lagging indicator, typically rising weeks after a surge in new infections.

Vaccinations in South America lag behind much of the world. In South America, just 15% of people have received at least one dose compared with 28% in Europe and 34% in North America. Only Asia and Africa are lower at 5% and 1%, respectively, according to Our World in Data through May 19.

The Pan American Health Organization (PAHO) has criticised "glaring gaps" in access to COVID-19 vaccines in Latin America, compared to the United States, which has had the lion`s share of the 400 million doses administered so far in the Americas.

Vaccine supplies have been slow to arrive in most countries and inoculation programs have been disorganised in some.

"Vaccination has lacked strategic planning," said pediatric surgeon Kurt Paulsen, who runs a vaccination site in Bolivia. "At first they brought lots of different vaccines with no information to show people what they are being injected with."