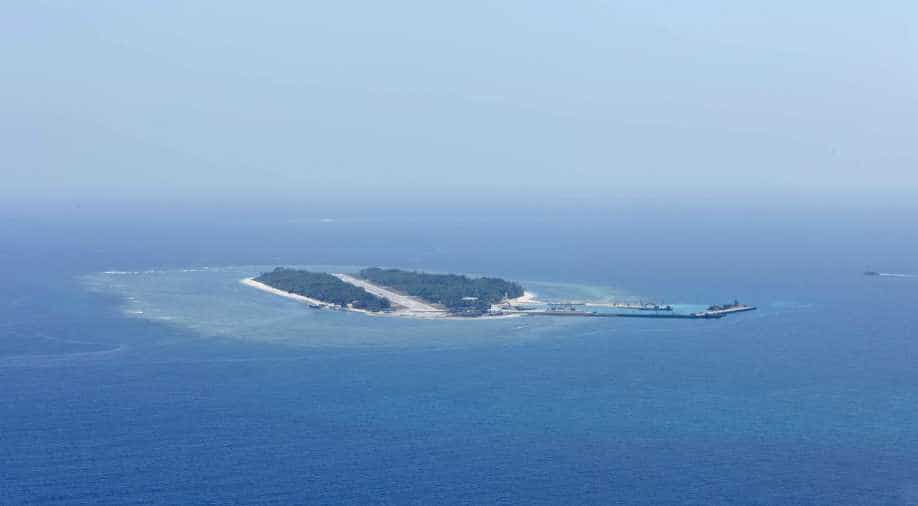 An aerial photo taken though a glass window of a Taiwanese military plane shows the view of Itu Aba, which the Taiwanese call Taiping, at the South China Sea, March 23, 2016. Photograph:(Reuters)
Follow Us

China will "pressure" the United States on maritime issues at key talks in Beijing next week because of Chinese concerns over the increased U.S. military presence in the disputed South China Sea, a major state-run newspaper said today.

China has been angered by what it views as provocative U.S. military patrols close to islands China controls in the South China Sea. Washington says the patrols are to protect freedom of navigation in the region.

"Beijing will pressure Washington over maritime issues during the upcoming Strategic and Economic Dialogue, as the United States' increasing military presence in the South China Sea is among China's major concerns," the official China Daily said, citing unidentified officials.

China claims most of the South China Sea, through which $5 trillion in ship-borne trade passes every year. The Philippines, Vietnam, Malaysia, Taiwan and Brunei have overlapping claims.

Earlier this month Beijing demanded an end to U.S. surveillance near China after two of its fighter jets carried out what the Pentagon said was an "unsafe" intercept of a U.S. military reconnaissance aircraft over the South China Sea.

China will also bring up the issue of self-ruled Taiwan - claimed by Beijing but which elected a pro-independence party to power in January - as well as the situation on the Korean peninsula, the newspaper added.

"The two countries have differing pursuits on major issues at the strategic level. However, the two still have many common interests," the report said.

"Whether it is on the South China Sea issue or on the Korean Peninsula issue, the two countries have a shared security goal to maintain regional stability," it added.

China is reclusive North Korea's only major ally but has been angered by Pyongyang's nuclear and missile tests and has hence signed up to tough UN sanctions against the reclusive country.