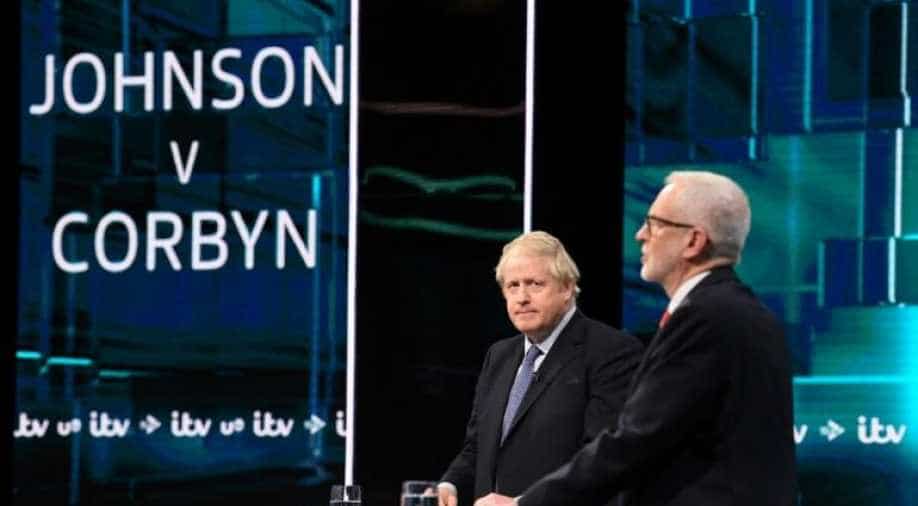 The prime-time event was held in Manchester and broadcast on ITV.

Johnson, who took over as the leader of the ruling Conservatives in July, relentlessly tried to keep the focus on his plan to finally take the country out of the European Union, reiterating his campaign mantra to "get Brexit done".

"We certainly will come out on January the 31st as we have a deal that is oven-ready," he said, also vowing to complete a future trading relationship with the bloc by 2021.

In the hour-long debate, Corbyn said his rival's timetable was unrealistic and that Johnson was poised to sell out Britain's cherished National Health Service (NHS) in a future trade deal with the United States.

The veteran socialist accused Johnson of holding "a series of secret meetings with the United States in which they were proposing to open up our NHS markets... to American companies".

"You're going to sell our national health service out to the United States and big pharma," Corbyn said, waving redacted documents he said were accessed under freedom of information laws that detail preliminary UK-US negotiations.

Johnson responded that the accusations were "an absolute invention".

"The single biggest threat to our economy and our ability to fund the NHS is our failure to get Brexit done," he said.

The debate was the first time voters had seen only the leaders of Britain's two main parties, which have held power since 1922, face off on TV.

Other smaller parties were excluded this time, a format that was unsuccessfully challenged in court.

Johnson has held a double-digit lead over Labour in opinion polls for weeks, making it his contest to lose.

Corbyn is seeking to repeat the success of the last election in 2017, when he came from a similar position to deny the Tories an outright win with promises to end austerity and deliver change "for the many, not the few".

The two leaders answered questions submitted by viewers in front of a live audience, with topics ranging from trust in politicians to the future of Scotland, as well as the British monarchy.

But the discussion repeatedly returned to Brexit, the defining issue that has paralysed British politics since the 2016 referendum.

Corbyn vowed to renegotiate Johnson's deal and hold another referendum, appealing to around half of Britons who still oppose the result of the 2016 Brexit vote.

But the Labour leader has yet to say how he would campaign in that referendum, drawing ridicule from Johnson.

"Are you going to campaign for Leave or Remain?", the Conservative leader asked Corbyn, who refused to commit.

Corbyn's party is promising a swathe of nationalisations and huge investment in public services.

"I believe in investing massively in our public services," Corbyn vowed. "I think this election is a turning point in the way we're going to manage our economy."

Johnson countered with warnings that Labour would cripple the economy, although he has also promised more money for hospitals, schools and police, as well as infrastructure including broadband.

"What would be more ruinous for the NHS than a crackpot plan for a four-day week," he said, referring to Labour's plan to transition to remove one working day from the week within a decade.

The Tory and Labour leaders will take part in several more debates involving the smaller parties, before another final head-to-head encounter on the BBC on December 66, less than a week before election day.