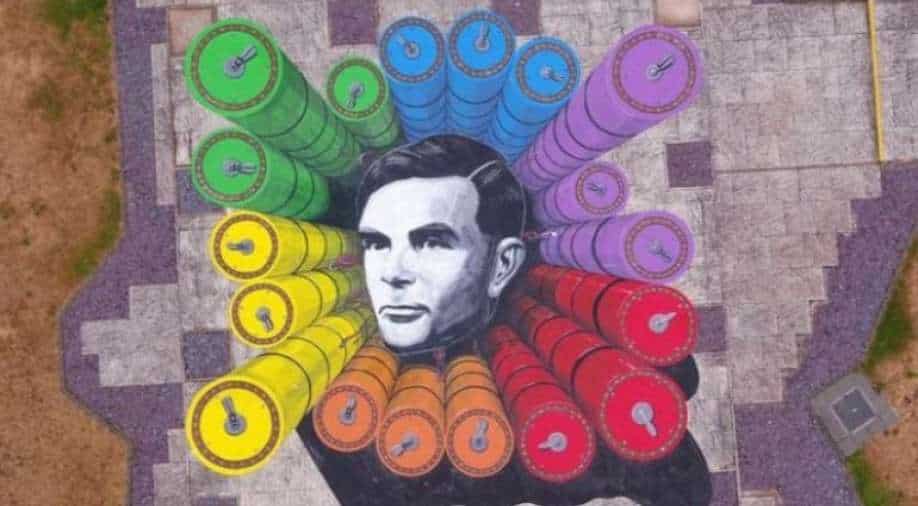 Britain's GCHQ spy agency has installed a giant multicoloured artwork to celebrate codebreaker and mathematician Alan Turing, who helped turn the tide of World War Two against Nazi Germany but was persecuted for being gay.

The 10-metre by 10-metre artwork in the centre of the agency's doughnut-shaped headquarters depicts Turing inside the wheels of the 'bombe' codebreaker machine that he designed.

Considered the father of modern computing, Turing led a team that cracked the Nazis' naval Enigma code for British spies, a breakthrough dramatised in the 2014 thriller 'The Imitation Game'.

But he pleaded guilty to gross indecency in 1952 after a sexual relationship with another man and, forced to have hormonal injections, killed himself two years later aged 41 by eating an apple laced with cyanide.

Unveiled on his birthday as a new 50-pound note featuring Turing entered circulation, the work at GCHQ in the western English city of Cheltenham was created by 3D artist Joe Hill and features 15 hidden codes.

Years after his death, Turing has become a symbol of the prejudice suffered by gay people during his lifetime.

"He was embraced for his brilliance but persecuted for being gay," GCHQ Director Jeremy Fleming said.

Turing joined the Government Code & Cypher School, a precursor to GCHQ, in 1939 to help break German codes. With Polish help, he broke Naval Enigma. He left GCHQ in 1945.

GCHQ is Britain's biggest spy agency. Its job is to eavesdrop on the world to protect British security, though it also disrupts communications.