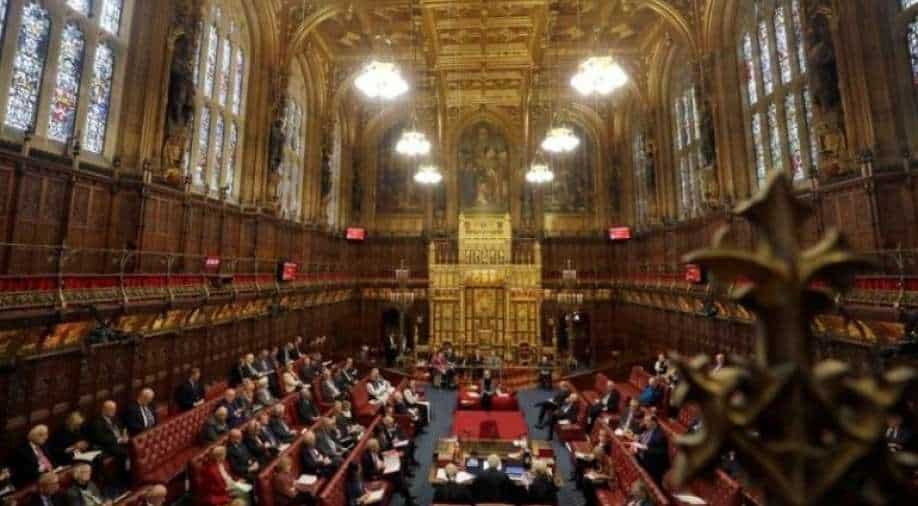 A general view at the House of Lords as the European Withdrawal Agreement Bill is debated in London, Britain. Photograph:( Reuters )

Unbeknown to the British public, on June 24, 1941, elected lawmakers from the green-benched House of Commons moved onto the red benches of the House of Lords chamber and remained there for nine years

Eighty years ago on Thursday, British lawmakers driven from their debating chamber by World War Two Nazi bombs secretly set up a new home less than 100 yards away, from where Prime Minister Winston Churchill ran the country's wartime government.

Unbeknown to the British public, on June 24, 1941, elected lawmakers from the green-benched House of Commons moved onto the red benches of the House of Lords chamber and remained there for nine years.

From this lavishly-decorated but clandestine setting they debated and legislated the war effort, and later passed plans to rebuild and reshape post-war Britain. The move was not officially acknowledged until after the war.

The emergency operation was set up after the bombing of the House of Commons debating chamber during a May 1941 air raid.

"Churchill went into the Commons chamber and he looked at the destruction and the one thing he said was 'Parliament will sit`' - he didn't quite know where, but thanks to the Lords, it was here," said House of Commons Speaker Lindsay Hoyle, speaking from within the heavily gilded Lords chamber.

Although only a short distance apart, the Commons and the Lords are usually separated by centuries of tradition in which the Commons proudly defends its independence from the British monarchy and its lawmaking supremacy over the unelected Lords.

But, the current speakers from both houses, Hoyle and his Lords counterpart John McFall, celebrated the anniversary this week in a display of unity to show the strength of Britain's democratic system.

"It demonstrates that in time of need, in time of crisis, that both houses work together," McFall said.

The little-known chapter in British wartime history required permission from King George VI, whose robing room in Westminster Palace was used by the displaced Lords to perform their constitutional role of scrutinising the government's work.

The move to the Lords was not without hitches.

Stained glass windows designed by Augustus Pugin had to be covered to block out light visible to German bombers. Lawmakers complained it was too hot in summer, too cold in winter and hard to hear each other in the high-ceilinged chamber lined with statues of medieval knights.

A rebuilt Commons debating chamber was reopened in 1950.

According to Lords clerks, Churchill left a physical legacy in the chamber in the form of a small dent caused by the oratorical flourish of thumping his signet ring into the table to punctuate his most powerful speeches.