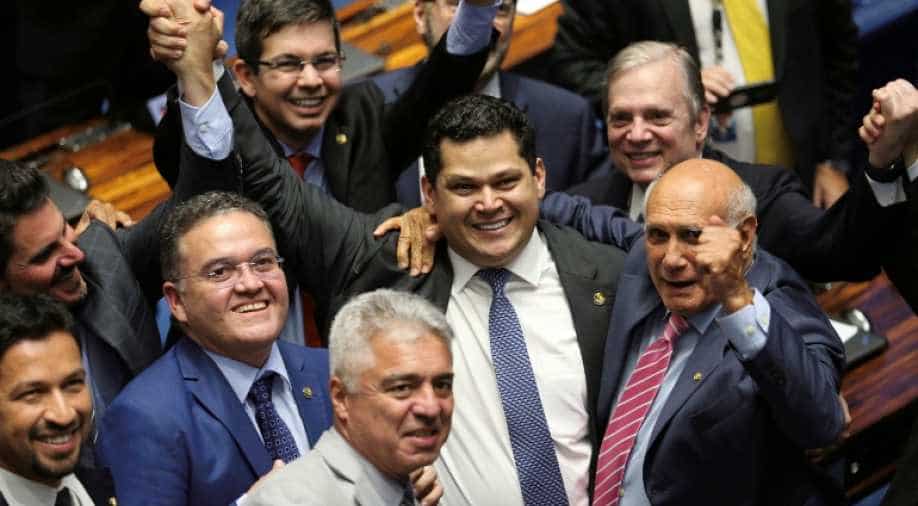 Davi Alcolumbre, from the Democratas party is congratulated by his colleagues after being elected for presidency of Brazilian senate in Brasilia, Brazil. Photograph:( Reuters )

Their victories should help Bolsonaro as he seeks to pass a divisive pension reform, which is widely seen as necessary to shore up Brazil's creaking public finances but is likely to face stiff opposition.

An ally of Jair Bolsonaro won a fraught vote for the head of Brazil's Senate on Saturday, a boost for the far-right president's legislative efforts to open the economy, tackle crime and enact socially conservative measures.

Davi Alcolumbre, from the Democrats party, was supported by the president's son, Senator Flavio Bolsonaro, and Bolsonaro's Chief of Staff, Onyx Lorenzoni. He won 42 votes, one more than was needed to become Senate president.

His election comes the day after Rodrigo Maia, also of the Democrats party, won his bid to remain leader of the lower house.

Their victories should help Bolsonaro as he seeks to pass a divisive pension reform, which is widely seen as necessary to shore up Brazil's creaking public finances but is likely to face stiff opposition.

The leaders of Brazil's legislative bodies have broad powers to pick and choose what bills are debated, and when. With two business-friendly legislature heads, Bolsonaro's pension reform bill stands a better chance.

However, the manner of Alcolumbre's win may herald trouble.

He beat Senator Renan Calheiros, a canny political operative who was seeking his fifth Senate presidency and had requested a secret vote.

But Flavio Bolsonaro revealed that he voted in favour of Alcolumbre, a move seen as indicating where the government's preference lay and likely dooming Calheiros, who subsequently withdrew.

"This process is not democratic," said Calheiros.

Calheiros enjoys strong support among the elder statesmen of the chamber but is increasingly at odds with growing public resentment against the veteran political class, seen by many Brazilians as corrupt.

He will now be the de facto head of a powerful group of senators that could pose a headache for Bolsonaro's legislative agenda in the upper house.