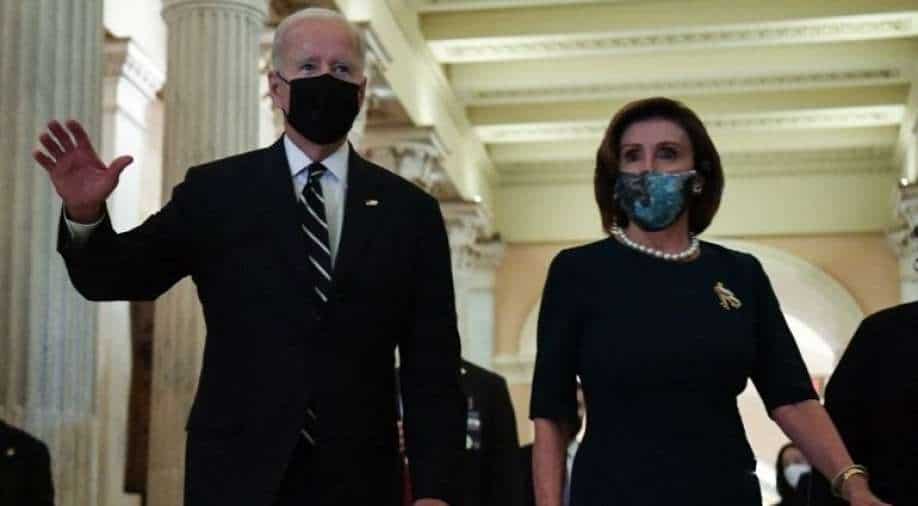 (File photo) US President Joe Biden and Speaker of the House Nancy Pelosi depart following a meeting with the Democratic caucus at the US Capitol in Washington, DC Photograph:( AFP )

Biden plans to announce the strategy at the National Institutes of Health. It comes a day after the new omicron variant was detected in the United States for the first time, in California

President Joe Biden, confronting a worrisome new coronavirus variant and the potential of a winter surge, will lay out a new pandemic strategy Thursday afternoon that includes hundreds of vaccination sites aimed at families, booster shots for all adults, insurance reimbursement for at-home coronavirus tests and fresh travel restrictions, including a requirement that international travelers must show proof of a negative coronavirus test taken within a day before departing for the United States.

Biden plans to announce the strategy at the National Institutes of Health. It comes a day after the new omicron variant was detected in the United States for the first time, in California.

Senior administration officials, speaking on condition of anonymity to preview the plan, said it was aimed at keeping the economy, workplaces and schools open.

A big part of the plan is a renewed push to get people vaccinated, including the latest group to become eligible: children ages 5-11. The administration plans to launch “hundreds of family vaccination clinics” that will offer vaccinations and boosters for people of all eligible ages, according to a fact sheet provided by the White House.

The president will also announce a national campaign to reach the 100 million Americans who are eligible for booster shots and have not had them. The campaign will include paid advertising and free rides to vaccination sites coordinated by AARP, the advocacy group for older Americans. And the Federal Emergency Management Agency will launch what the administration is calling Family Mobile Vaccination Clinics, beginning with deployments to Washington and New Mexico. The goal is for states and localities to replicate the model “with full federal funding and support,” officials said.

Biden will call on employers to provide paid time off for employees to get boosters.

Biden ran for office in 2020 on a promise to get the pandemic under control. Since then, though, the virus “has thrown us a number of curveballs, and unfortunately they were thrown at 200 miles an hour,” said Michael Osterholm, who directs the Center for Infectious Disease Research and Policy at the University of Minnesota.

Many experts predict a surge in the United States over the winter, regardless of whether the omicron variant spreads widely in the country. The nation has been reporting an average of more than 80,000 new cases a day over the last few weeks, according to a New York Times database. Six months ago, the average was roughly 12,000 new cases a day.

The Biden administration’s pandemic response has relied heavily on vaccinations — too heavily, in the view of some experts, who have argued for months that testing and mask-wearing are also essential to containing the virus and will become even more so if the omicron variant is found to evade protection from vaccines.

The variant was first spotted by scientists in southern Africa and is now known to be present in more than 30 countries, including the United States. It has mutations that scientists say may allow it to spread more quickly and cause more breakthrough infections in vaccinated or previously infected people, though neither characteristic has yet been confirmed.

In the United States, home coronavirus tests have been relatively hard to come by because of supply shortages, and they are expensive — as much as $25 apiece. Dr. Carlos del Rio, an infectious disease specialist at Emory University, said that rather than have people go through the cumbersome process of seeking insurance reimbursement for tests, “we should just subsidize them and make it incredibly cheap.”

In Britain, he noted, rapid tests are free, and in Germany they cost consumers about $1 apiece.

Reimbursement for at-home tests in the United States will not happen immediately and will not be retroactive, the senior administration officials said, adding that federal agencies would issue guidance by Jan. 15 to clarify that insurers would have to reimburse people for at-home tests during the COVID-19 public health emergency. It was unclear how many tests a person could be reimbursed for buying.

Private insurers already cover the cost of coronavirus tests administered in doctors' offices and other medical facilities. At least eight at-home tests are on the U.S. market.

Looking forward, experts envision a world where people will test themselves as soon as they exhibit symptoms — and then, if they are positive, would go into quarantine and seek treatment with new antiviral medicines that are in development. The White House says it is taking steps to secure 13 million courses of antiviral treatments.

Biden’s new strategy will extend the current mask mandate for people on airplanes, trains and buses and in terminals and transit hubs through mid-March.

Only six states now require people to wear masks in indoor public settings regardless of their vaccination status. Three more — California, New York and Connecticut — require masks indoors for people who are unvaccinated.