Battling to hold off Sanders,Clinton to assail Trump on foreign policy 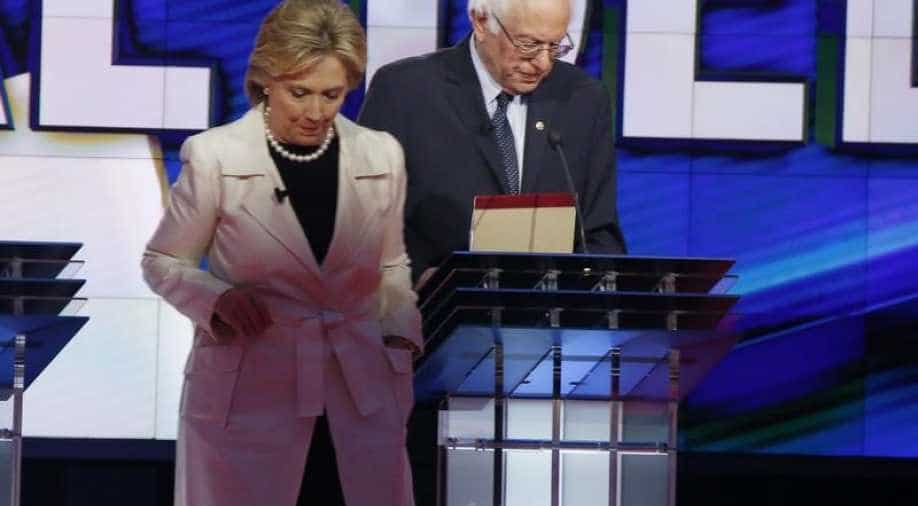 Democratic U.S. presidential candidate Hillary Clinton (L) and rival Bernie Sanders leave their podiums at the conclusion of the Democratic debate hosted by CNN and New York One at the Brooklyn Navy Yard in New York April 14, 2016. Photograph:( Reuters )

Democratic presidential front-runner Hillary Clinton's campaign on Wednesday signaled plans for a big assault on Republican Donald Trump, even as she battles to hold off rival Bernie Sanders in California.

Clinton, a former Secretary of State, is to deliver what her campaign described as a major speech today in San Diego to underscore what she feels would be the threat posed by Trump to U.S. national security if he is elected president on Nov. 8.

Her language to describe Trump has grown more aggressive by the day. On Wednesday, she seized on testimony released in a lawsuit against Trump University, in which some former workers said they believed Trump's for-profit school was fraudulent.

"Trump and his employees took advantage of vulnerable Americans encouraging them to max out their credit cards, empty their retirement savings, destroy their financial futures, all while making promises they knew were false from the beginning," Clinton told a campaign event in Newark, New Jersey.

"This is just more evidence that Donald Trump himself is a fraud."

Lawyers for Trump have said most students were satisfied with Trump University, dismissing the former workers' testimony as discredited.

Trump, anticipating Clinton's foreign policy attacks on him, tried to raise doubts about her leadership skills at a rally in Sacramento, Calif.

"She is a person with absolutely no natural talent," he said. "All you have to do is watch her speak."

Repeatedly referring to Clinton as "crooked Hillary," Trump sharply criticized her handling of foreign policy, including the Sept. 11, 2012, attack by Islamic militants on a U.S. diplomatic facility in Benghazi, Libya, that killed the U.S. ambassador.

"She went to sleep," Trump added.

Clinton's effort to define Trump as unfit to be commander-in-chief comes as she faces fierce opposition from Sanders, a U.S. senator from Vermont who has insisted on staying in the fight for the Democratic presidential nomination despite Clinton's nearly insurmountable lead.

California's primary next Tuesday is shaping up to be pivotal in the Democratic contest, with Clinton holding a 13-point advantage over Sanders, 51 percent to 38 percent, according to the Hoover Institution's Golden State Poll in the state. An NBC News/Wall Street Journal/Marist poll gave Clinton a much narrower lead of 49 percent, to 47 percent for Sanders.

Clinton, with 2,312 delegates, needs 71 more delegates to reach the required 2,383 for the Democratic nomination. Sanders has 1,545. At stake in the California primary are 548 delegates who are awarded proportional to the vote. Five other states also vote next Tuesday, including New Jersey, which could also turn the tide for Clinton.

Despite Clinton's perceived advantage, there are lingering concerns among some Democrats about possible weakness, given the protracted battle with Sanders, a democratic socialist whose calls for free college tuition have energized young voters.

Doug Schoen, a Democratic pollster, wrote in the Wall Street Journal on Tuesday that California voters appeared to be leaning toward Sanders in recent days.

Sanders has been holding events every day this week in the state. Clinton canceled a New Jersey event planned for today to go to California a day earlier than anticipated and is to stay there until Monday.

"The inevitability behind Mrs. Clinton’s nomination will be in large measure eviscerated if she loses the June 7 California primary to Bernie Sanders," Schoen wrote. "That could well happen."

Other Democrats expressed confidence in Clinton's position and her move to assail Trump on foreign policy.

"I think she has to," said Democratic strategist Jim Manley. "Leaving aside California, I think they can’t just ignore Donald Trump in that they should be spending a majority of time focusing on him instead of Sanders at this point, because based on the math Sanders can’t win."

Trump, the presumptive Republican nominee, has faced criticism for a variety of positions on foreign policy, such as his willingness to talk to North Korean leader Kim Jong Un and his idea that Japan and South Korea might need to develop nuclear arsenals.

On the other hand, past Republican presidents and current Democratic President Barack Obama have, like Trump, said NATO nations should pay more for their defense to ease the U.S. burden. Trump, however, has declared NATO obsolete and in need of reconfiguring.

A Clinton aide said  Hillary Clinton, would say Trump had not outlined a coherent foreign policy doctrine and had proven himself to be temperamentally unfit to serve as president.