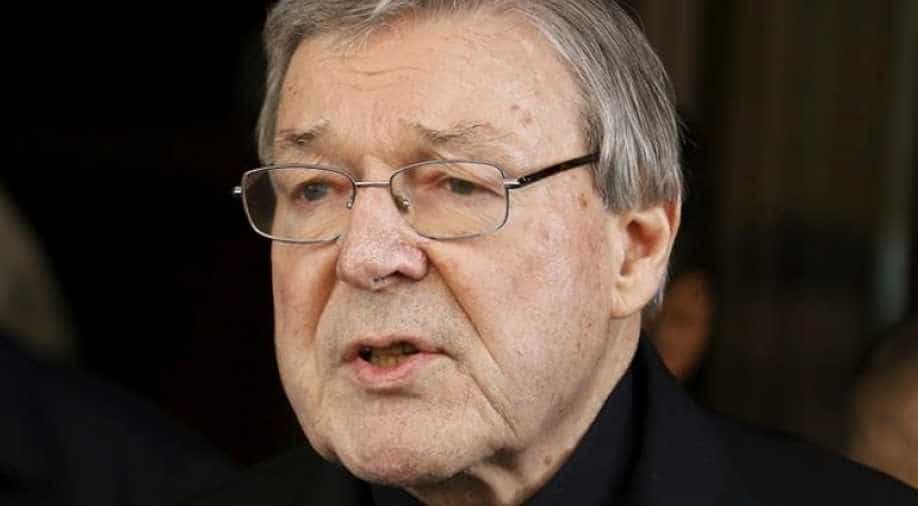 Pell speaks to journalists at the end of a meeting with the sex abuse victims at the Quirinale hotel in Rome. Photograph:( Reuters )

Cardinal Pell, Australia's most senior Catholic cleric, was interviewed in Rome by Australian detectives last October over the assault claims, which he has strenuously denied.

The allegations came from two men, now in their 40s, who said he groped them in summer 1978-79 at the Eureka pool in Ballarat, Australia, where the cleric grew up and worked.

The police brief of evidence on the matter was handed to the Director of Public Prosecutions earlier this year to assess whether it was sufficient for charges to be laid.

That advice has now been handed back to them.

"Victoria Police can confirm that it has received advice from the Director of Public Prosecutions relating to a current investigation into historical sexual assault allegations," they said in a statement.

"Detectives from Taskforce Sano will now take time to consider that advice. As with any investigation it will be a decision for Victoria Police as to whether charges are laid."

Pell was a priest in the Ballarat diocese before becoming the Archbishop of Melbourne and then Sydney ahead of being hand-picked in 2014 by Pope Francis to make the church's finances more transparent.

The claims against him came just months after Pell admitted he "mucked up" in dealing with paedophile priests in Victoria state in the 1970s, while giving evidence to an Australian inquiry into institutional responses to child sex abuse.

He has appeared before the long-running royal commission three times, once in person and twice via video-link.

Earlier this week, a new book, "Cardinal: The Rise and Fall of George Pell", was published with fresh details on allegations against him, and new information claiming a cover-up within the Catholic Church.

Pell, who has repeatedly denied all the accusations and suggested a conspiracy against him, called the book "an exercise in character assassination".

"Each and every allegation of abuse and cover up against him is false," said a statement from his Rome office on Monday.