Australia goes to the polls today 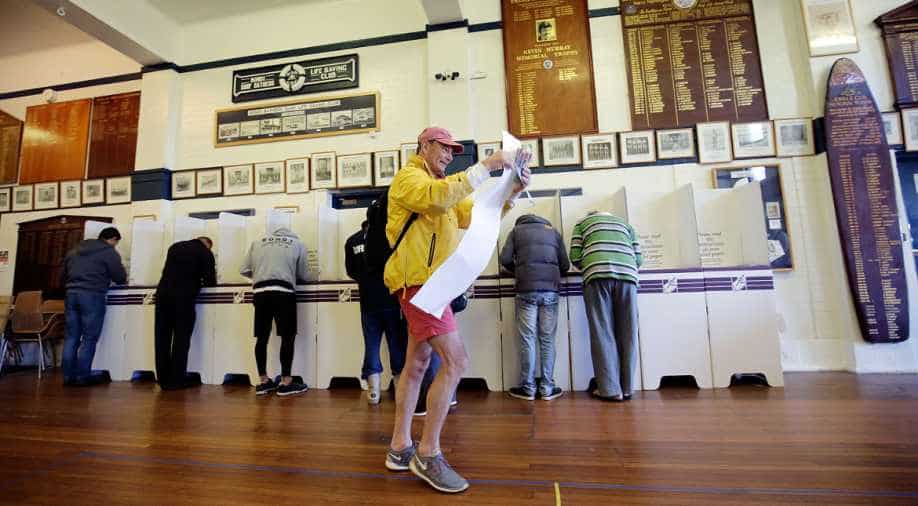 The ballot is mandatory, some 15.6 million voters will take part. Photograph:( Getty )

Follow Us
Australians flocked to vote in national elections Saturday with conservative leader Malcolm Turnbull appearing to have a slight edge over Labour's Bill Shorten, culminating a marathon race where economic management has become a key issue in the wake of the Brexit vote.

Polling stations opened at 8am (2200 GMT) with some 15.6 million voters taking part in a mandatory ballot across the huge country, with long queues forming as people made their choices.

After an eight-week campaign, a Newspoll of 4,135 people published in The Australian newspaper showed Turnbull's Liberal/National coalition 50.5 to 49.5 percent in front on a two-party basis, while a poll in the Sydney Morning Herald had them in a dead heat.

Shorten's Labour needs to pick up at least 19 seats in the 150-seat parliament to secure the 76 it needs to govern in its own right.

The coalition, which headed into the election with a comfortable majority, can afford to lose as many as 13 seats and still hold power and has the backing of the nation's powerful media, which has cited the need for stability.

But polls are also forecasting large numbers of people voting for the Greens or other minor parties and independents, which raises the prospect of a hung parliament where no side commands a lower house majority.

Multi-millionaire former banker Turnbull, 61, is looking to bolster his power after ousting fellow Liberal Tony Abbott in a party coup last September and cast his vote at a school near his Sydney harbourside mansion.

"Win the election," a boy yelled out as he stuffed his voting form in the ballot box, to which Turnbull replied: "Thank you, we are working on it."

Ex-union chief Shorten, 49, is gunning to return Labor to office after it was thumped by the conservatives at the last election in 2013, and was due to vote in his Melbourne constituency later Saturday.

"What will decide this election is what is in the best interests for working and middle class Australia," he said in a last-ditch bid to rally undecided voters to his platform of better health, jobs and education.

Unexpected headwinds
Turnbull has campaigned on tough asylum-seeker policies, a plan to hold a plebiscite on gay marriage, and his economic credentials as the country transitions from a mining investment boom and focuses on job creation and diversifying.

He has also channelled the instability sparked by Britain's shock vote to leave the European Union, warning Australia must "have the plan that meets the nature of our times, a time of opportunity and of challenge".

According to the official #ausvotes Twitter feed, the most tweeted topics during the campaign have been healthcare, the economy, education and housing affordability and voters in Sydney said they expected a tight contest.

"There's been a lot of disunity in the last couple of years (in Australia)," voter Sarah Lander told AFP, referring to the country's revolving door of prime ministers.

"With what's going on in the world, with the UK (Brexit) and terrorism, why wouldn't you want to stick with what you know?"

Turnbull called an election early because crossbenchers -- politicians who are independent or from minor parties -- hold the balance of power in the upper house Senate.

They have failed to pass deadlocked legislation to overhaul unions, which provided the trigger for a double dissolution of parliament, where all seats in the upper and lower houses are contested.

But some experts are suggesting the upper house could end up with more crossbenchers after the election than before, as voters fed up with traditional politicians look for alternatives.

Most polls close at 6:00 pm (0800 GMT) Sydney time with the remainder two hours later due to time differences in a country where people overwhelmingly abide by their obligation to vote.