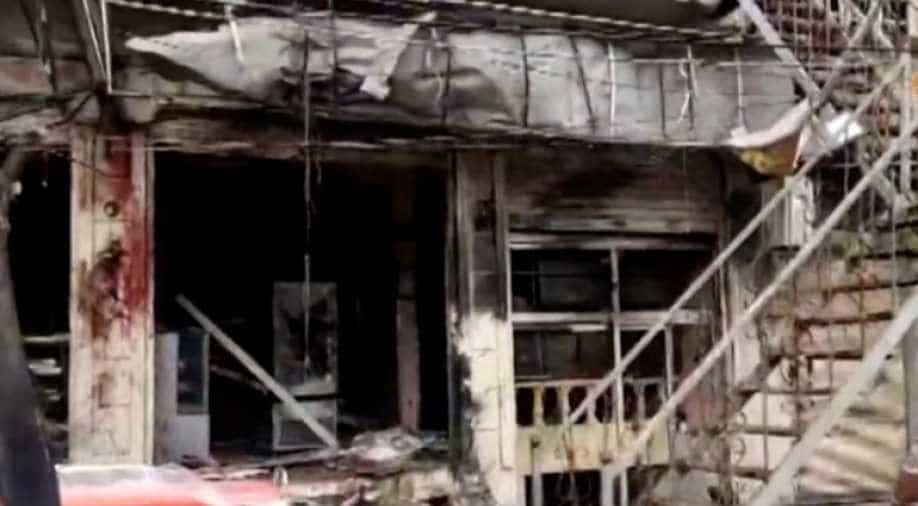 A suicide attack claimed by the Islamic State group killed 15 people including a US serviceman Wednesday in the northern Syrian city of Manbij near the Turkish border, a monitor said.

Nine civilians and five US-backed fighters were among the dead in the attack on a restaurant in the flashpoint city, the Syrian Observatory for Human Rights said.

Rubble littered the outside of the eatery in the city centre, footage from a Kurdish news agency showed, and its facade was blackened by the blast.

The Britain-based Observatory, which relies on a network of sources in Syria, said it was the first such suicide attack in the city against the US-led coalition fighting IS in 10 months.

The bombing came as Kurds who control a large swathe of northern Syria rejected a Turkish plan to set up a "security zone" on the Syrian side of the border.

Washington, which has relied heavily on the Kurds in its campaign against IS in Syria, has sought guarantees for their safety after President Donald Trump suddenly announced a US troop pullout last month.

On Tuesday, Turkey's President Recep Tayyip Erdogan said Ankara would set up a "security zone" in northern Syria following a suggestion by Trump.

The planned buffer would embrace a large swathe of the autonomous region the Kurds have established in northern and northeastern Syria.

He said the Kurds would accept the deployment of UN forces along a separation line between Kurdish fighters and Turkish troops to ward off the threatened offensive.

Ankara has welcomed Washington's planned withdrawal of some 2,000 US troops from Syria but the future of US-backed Kurdish fighters has poisoned relations between the NATO allies.

On Monday, Erdogan had a telephone conversation with Trump to ease tensions after the US leader threatened to "devastate" the Turkish economy if Ankara attacks Kurdish forces in Syria, and called for a "safe zone".

The Kurdish People's Protection Units (YPG) have been the key US ally in the fight against IS.

They have taken heavy losses in a campaign now nearing its conclusion, with the jihadists confined to an ever-shrinking enclave of just 15 square kilometres (under six square miles).

The shock announcement of a US withdrawal has sent the Kurds scrambling to seek a new ally in Damascus, which has long rejected Kurdish self-rule.

With military backing from Russia since 2015, President Bashar al-Assad's government has made huge gains against the jihadists and rebels, and now controls almost two-thirds of the country.

A northwestern enclave held by jihadists and pockets held by Turkish troops and their allies remain beyond its reach, along with the much larger Kurdish region.

"The best and only solution is the transfer of these territories under the control of the Syrian government, and of Syrian security forces and administrative structures," Lavrov said.

The head of Iran's Revolutionary Guards, another key ally of the Damascus regime, said it would not withdraw any forces from Syria, dismissing Israel threats.

Erdogan said he had a "quite positive" telephone conversation with Trump late on Monday in which he reaffirmed that "a 20-mile (30 kilometre) security zone along the Syrian border... will be set up by us."

The Syrian Kurdish leader said Turkey was the wrong choice to oversee the mooted "security zone".

"Trump wants to implement these safe regions through cooperation with Turkey. But any role for Turkey will upset the balance and the region will not be safe," Khalil said.

The Turkish army has launched two major operations in Syria -- in 2016 against IS jihadists and Syrian Kurdish fighters, and in 2018 targeting the Kurds.

The last offensive saw Turkish troops and their Syrian rebel allies overrun the Kurdish enclave of Afrin in the northwest, one of several the Kurds had governed since 2012.

Critics have accused Turkish troops and their proxies of military occupation of Syrian sovereign territory.

Ankara has spoken of a YPG-free "security zone" under its control, but it is not clear if Washington has the same details in mind.

Analyst Mutlu Civiroglu said it was not immediately clear what the US president meant by a "safe zone", or who he thought would patrol it.

Analysts were "waiting for a clarification from Washington to see what the president really meant", he told AFP.