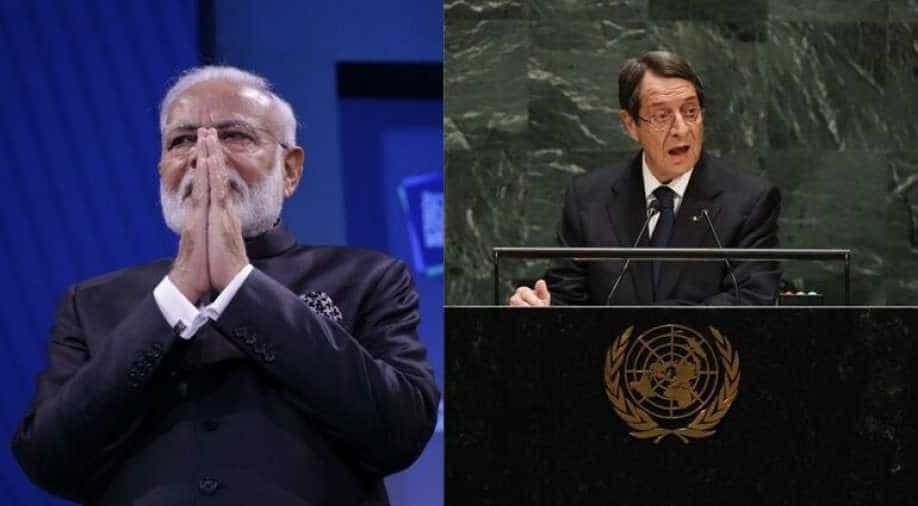 The Prime Minister Narendra Modi met the President of Cyprus Nicos Anastasiades on the sidelines of the United Nations General Assembly and reiterated India’s "consistent support for the independence, sovereignty, territorial integrity and unity of the Republic of Cyprus."

The development comes at a time when Turkey has been very vocal and continues to back Pakistan's line on Kashmir. In fact, Turkish President Recep Tayyip Erdoğan spoke from the United Nations General Assembly on Kashmir, which may irk New Delhi.

Cyprus and Turkey don't have very good ties as Turkey occupies the northern part of the island country. Recently, Ankara threatened Cyprus with its plan to drill in what Nicosia says is their "exclusive economic zone".

Nicos Anastasiades speaking from UNGA said, "Turkey threatens Cyprus that there will be severe consequences if we proceed ahead with our energy programme... it threatens neighbouring states and energy companies, with which we are cooperating and have established conventional obligations".

Cyprus is called Europe's last divided country with its capital being referred to as the last divided capital of the continent. The Mediterranean island country was invaded by Turkey in 1974 and led to the formation of "Northern Cyprus", recognised only by Turkey. Turkey continues to retain its military presence in the region and has faced criticism for its actions by the United Nations Security Council.