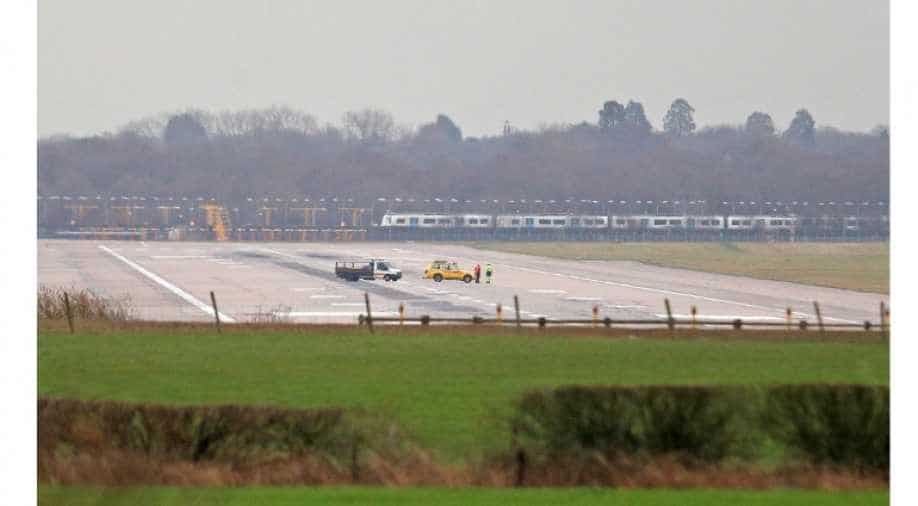 Airport vehicles stand on the closed runway at Gatwick Airport after drones flying illegally over the airfield forced the closure of the airport, in Gatwick, Britain, December 20, 2018. Photograph:( Reuters )

Gatwick serves more than 228 destinations in 74 countries for 45 million passengers a year and is the eighth-busiest airport in Europe and sits behind Mumbai as the world's busiest single-runway air hub.

Britain called in the army Thursday after dozens of drone sightings grounded all flights from London's Gatwick airport for more than 24 hours, leaving tens of thousands of passengers stranded on one of the busiest days of the year.

The airport, which closed its only runway Wednesday night after "reports of two drones flying in and around the airfield", said late Thursday it could not be reopened following further appearances of the devices.

"Gatwick's runway remains unavailable because of continued drone sightings," it said in an 11:00 pm (2300 GMT) update.

Police and airport authorities believe they were being flown in a deliberate act to disrupt the airport.

The unusually large drones had been spotted near the airfield more than 50 times over the 24-hour period, police said Thursday night.

"We think it may have been adapted and developed," said Detective Chief Superintendent Jason Tingley of the devices, adding officers were reviewing CCTV footage to identify the make and model.

He said firearms officers were now considering shooting the device down despite authorities earlier saying that would be dangerous due to the danger of stray bullets.

The runway closure stranded tens of thousands of travellers days before Christmas and prompted the unusual military operation.

Specialist equipment has been deployed by the MOD (Ministry of Defence) to Gatwick airport to assist Sussex Police.

"We are there to assist and do everything we can," Defence Secretary Gavin Williamson told Sky News television, declining to give the troops' exact role and adding that it followed a request from local police.

Gisele Fenech, 43, who was travelling to Malta, was among those stranded at the airport.

"We're meeting family and it's my daughter's birthday today so it's gone all wrong. We've been looking forward to this for so long," she told AFP.

"Everyone's trying to get home for Christmas."

Gatwick, around 30 miles (50 kilometres) south of the British capital, is the eighth-busiest airport in Europe and sits behind Mumbai as the world's busiest single-runway air hub.

Inbound flights were diverted to other airports, including Paris, while passengers waiting to take off faced gruelling delays as airlines cut services.

Easyjet, Gatwick's biggest operator, said it had cancelled all its flights in and out of the hub Thursday.

Transport Secretary Chris Grayling said overnight restrictions would be lifted at some airports to help ease the situation.

Some 10,000 passengers were affected on Wednesday night and a further 110,000 who had been due to either take off or land at the airport on 760 flights Thursday.

Gatwick said it anticipated disruption to continue into Friday.

Musab Rashid, 22, who was going to Copenhagen, said: "It's wrong, it's childish of them to do this because it's affected more than 100,000 people."

Two drones were first spotted flying over Gatwick at around 9:00 pm (2100 GMT) on Wednesday. The airfield briefly reopened at 3:00 am on Thursday but had to be closed again following further sightings through the day.

Gatwick CEO Stewart Wingate said the incident was "a highly targeted activity which has been designed to close the airport and bring maximum disruption in the run-up to Christmas".

"We are working very closely with the police and the security services to try to resolve this for passengers," he said, adding "as soon as we can we will" reopen the runway.

A cat-and-mouse manhunt is underway to catch those operating the drones, with more than 20 police units and dozens of officers from two local forces deployed.

Police superintendent Justin Burtenshaw said: "We believe this to be a deliberate act to disrupt the airport. However, there are absolutely no indications to suggest this is terror-related."

He added: "Each time we believe we get close to the operator, the drone disappears; when we look to reopen the airfield, the drone reappears."

"We will continue to work with the Gatwick authorities and police will be working... in order to bring this to a close," she said at a press conference in London.

Under a new British law, drones cannot be flown near aircraft or within a kilometre of an airport, or at an altitude of over 400 feet (122 metres).

May warned the perpetrators they could face up to five years in prison for endangering an aircraft under recently passed legislation.

"We're consulting on further aspects of this including further police powers," she added.

Gatwick serves more than 228 destinations in 74 countries for 45 million passengers a year.