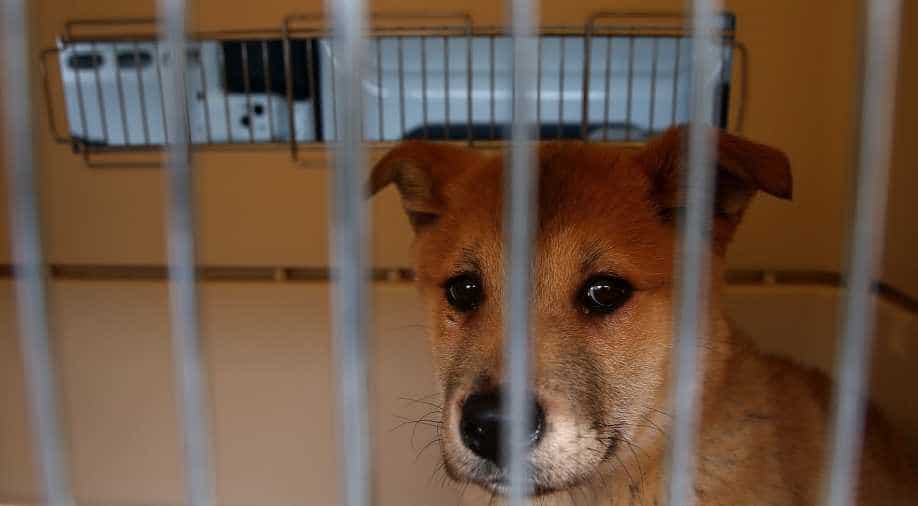 The puppy had reportedly fractured her right leg but otherwise seemed unscathed by her ordeal. (Representative image) Photograph:( Getty )

Follow Us
Every year, the south-eastern Chinese city of Yulin hosts the infamous dog meat festival to celebrate the summer solstice on June 21.
It is estimated that more than 10,000 dogs will be slaughtered to satisfy the appetite of the participants. They are not the only victims, even cats end up being butchered.

It is still not clear where do all this animals come from. Some claim that many of them are stolen from houses.

Yulin festival has always attracted heavy criticism, both from domestic and international organisations.

In 2014, the city government distanced itself from the event, saying it was staged by private business people and did not have official backing.

On Friday, animal rights activists delivered an eleven-million-signature petition to authorities in Beijing, asking to put an end to what they believe to be a useless massacre.

The two dozen activists who presented the petition were accompanied by dogs and banners with pictures of the animals, reading "I'm not your dinner."

Campaigners' efforts could also have a perverse effect. "Because of the protests, more people know that Yulin has a dog meat festival, so everyone comes and tries it," said Lin, the owner of Yulin Number One Crackling Dog Meat Shop.

Eating dog meat is a tradition that dates back in time, Chinese citizens have been consuming it for the past four centuries. This habit is not peculiarly Chinese, meat dog consumption is widespread also in other Asian countries like Thailand, South Korea and Vietnam.

According to beliefs, dog meat is particularly recomended in hot weather. Fans also say it is not different from consuming any other meat, an opinion that falls in line with the common chinese figure of speach “eating anything giving its back to the sun, except tables.”
(AFP)