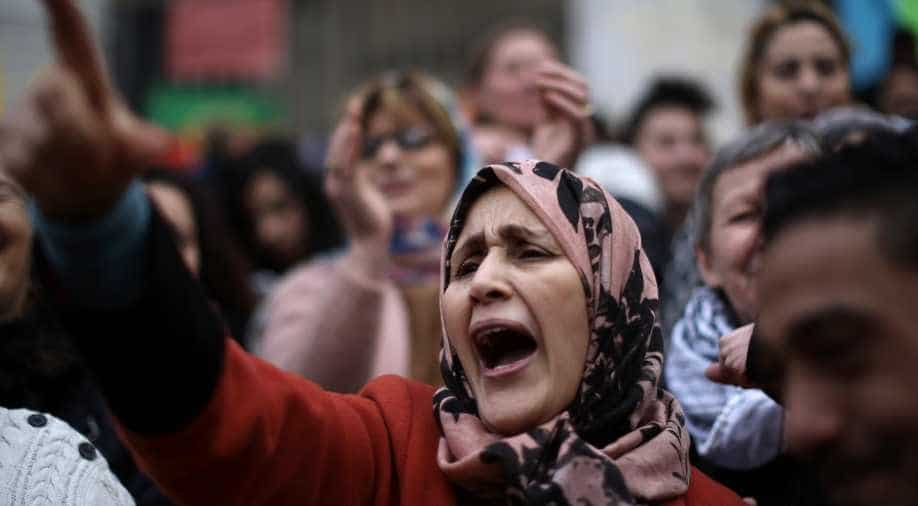 On 22 March 2016, three coordinated nail bombings occurred in Belgium: two at Brussels Airport, and one at Maalbeek metro station in Brussels. In these attacks, 32 victims and three perpetrators were killed, and over 300 people were killed. Photograph:( Getty )

When Moroccan-born former boxer Mohamed Idrissi orders a young man out of his gym for smoking, the respect is tangible.

The youngster stubs out his cigarette and leaves, head bowed. Inside the gym, the muted thud of leather gloves striking punchbags resumes.

Idrissi's influence goes beyond his job as a coach at the Brussels Boxing Academy, near the Molenbeek district of the Belgian capital where Islamist militants, several of them of Moroccan origin, planned last year's deadly Paris attacks.

He also has an informal role mentoring youths facing what Reuters interviews with local officials, social workers and residents of Molenbeek suggest is a growing feeling of alienation and increasingly tense relations with police.

Building trust in communities such as Molenbeek is seen by police as vital for gathering intelligence and countering the threat of Islamic State, and respected local figures like Idrissi have a part to play.

"Boxing is a philosophy which I tell them to apply in life," Idrissi said of his young boxers at the gym in a primary school in central Brussels, across an industrial-era canal from the halal shops, tea parlours and mosques of Molenbeek.

"I tell them: 'You have to fight to be Belgian'," said the 34-year-old, who deserted from the Moroccan military police a decade ago while taking part in a boxing competition.

Since the Nov. 13 bloodshed in Paris, security has been tightened in Molenbeek, a district described by its own mayor as a "breeding ground" for violence, and many Muslims say they feel stigmatised.

Idrissi is angered by frequent police checks of people with Moroccan roots which he sees as racial profiling although police deny this. But he bites his tongue in the presence of young men to avoid repeating "the kind of comments we warn parents can feed into their radicalisation."

Some parents, he says, have turned to him to talk their sons out of plans to join Islamist militants in Syria. Police also visited the gym this year as part of a programme to improve their image with youngsters.

At least five men who trained there have travelled to Syria. One, Ayoub Bazarouj, was detained in December on suspicion of having links to the Paris attacks, in which 130 people were killed. He was released in January without charge.

Another, Ahmed Dahmani, was arrested in Turkey last year on suspicion of scouting out sites for the militant strikes. Police released a photograph of Dahmani at the gym, holding his fists up as if ready to throw a punch at the camera. Belgium asked for his extradition from Turkey earlier this year.

Idrissi declined comment when asked about his interaction with police over some of his young charges going to Syria.

A failure to stop the militant cell behind the Paris attacks from carrying out more bombings -- 32 people were killed in bombings on the Brussels metro and at the city's international airport on March 22 -- has highlighted the police lack of knowledge of Molenbeek and their few ties with its residents.

The police are also hard pressed to overcome the fear of IS that discourages possible informants. One resident, Hawa Keita, has received death threats since informing on the network that enticed her son to Syria and says: "We live in fear."

Having eyes on the ground is vital for plugging the intelligence gaps, many officers say.

"It's not enough to bug phones: you need to know what you are listening for," Andre Jacob, a former head of Belgium's State Security agency, the Surete de l'Etat.

As in similar communities across Europe, Belgian police are struggling to build bridges with young Muslims at the same time as they hunt for militants. They have carried out dozens of raids and arrests in Belgium in recent months.

The Interfederal Centre for Equal Opportunities (UNIA), an advocacy group which also works with police on rights issues, says the number of calls to its hot lines complaining about alleged abuse by police has jumped since the Paris attacks.

Its director, Patrick Charlier, witnessed what he called latent Islamophobia in workshops his organisation conducted with police before the Paris attacks. Such sentiment, he suggests, is now out in the open.

"We all of a sudden had a number of cases (of complaints against police)," Charlier said, but declined to give figures, saying it was too soon to assess.

Residents in Molenbeek are angered by some of the comments made about the Muslim population in Belgium, including the interior minister's suggestion that many Muslims danced in celebration after the Brussels bombings.

"Being rejected, relegated to trash schools, it's not surprising it ends in bombs," said 48-year-old Milodi Rahma. "We are doubly victimised: victims of IS and of Islamophobia."

Belgium has announced a 39-million-euro ($44 million) plan to improve police coordination in Brussels, including boosting staff in Molenbeek for the first time in two decades. The district now has an eight-person unit, whose task is to prevent radicalistion.

"One day they're taking part in a big violent raid and the next they're supposed to go out and chat," said Vincent Gilles, who heads the Belgian police union. "A community policeman needs to be seen ... as a partner, not an enemy."

The suspicion cuts both ways in Molenbeek, where the IS cell spent months planning the Paris carnage and where one suspect, Salah Abdeslam, hid with what many officers believe was the blessing of the community.

"You can't tell me no one knew where he was," said Kris Vanstraeten, a police inspector in the area.

When police did find him, some youths hurled glass bottles and insults at them.

Molenbeek mayor Fran?oise Schepmans, who made her comment about the district of 95,000 being a nest of violence two days after the Paris attacks, says the police have a difficult role and relations are as good as they can be.

"It's there to handle security, not to babysit," she said.

But she says too few police know the areas where they operate. Of 50 federal officers sent to work in Molenbeek after the March bombings, none was even from the capital.

"Sometimes we have young policemen who arrive and say 'Uh-oh, where am I?'," said local police spokesman Johan Berckmans.

Acknowledging that breaking down barriers was difficult, he said: "It's always a question of 'us and them'."