Ahead of Royal wedding, fans join the homeless in the UK as they sleep on the streets outside Windsor castle 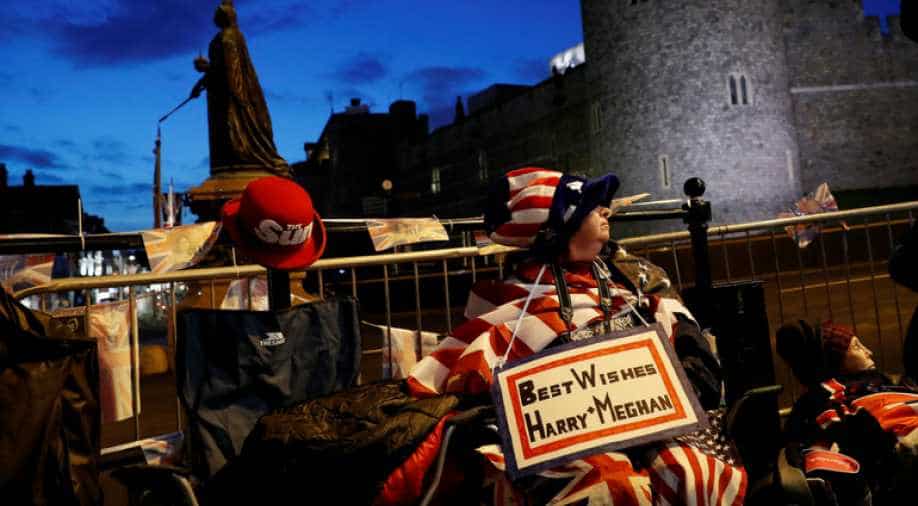 Fans of the royal family camp outside Windsor Castle prior to the wedding of Prince Harry and Meghan Markle in Windsor Photograph:(Reuters)
Follow Us

Across the road from Queen Elizabeth`s Windsor Castle home, Lewis Davis huddles under a bus shelter, one of the many town`s homeless people who sleep rough in doorways in the genteel town.

Opposite, a new array of sleeping bags has appeared, the temporary home for royal superfans, some of whom have travelled thousands of miles to spend their days and nights on Windsor`s streets for a glimpse of the queen`s grandson Prince Harry and his fiancee Meghan Markle`s on their glittering wedding day.

"They’ve got their own home, they’re camping. We actually live out here. That’s the difference," Davis, originally from the nearby town of Slough, told Reuters.

The issue of rough sleepers in Windsor made headlines in January when the local council leader said they would be cleared from the streets before Saturday`s wedding because their “detritus” was presenting the quaint town, dominated by the castle to the west of London, in a poor light.

Simon Dudley, the leader of the Royal Borough of Windsor and Maidenhead council, wrote on Twitter there had been an “epidemic of rough sleeping and vagrancy” in the town and said he wanted police “to focus on dealing with this before the #RoyalWedding”. His remarks drew criticism from local homeless organisations and even Prime Minister Theresa May.

"They shouldn’t really hide the fact that there are homeless people here," Davis said. "They should help us."

Homelessness has become a high-profile political issue in recent months, with official figures showing that there were 4,134 rough sleepers counted on a single night in England in autumn 2016, an increase of 134 percent since 2010 when there were fewer than 1,800.

The government has set a target of halving rough sleeping by 2022 and abolishing it by 2027, with May promising to spend 500 million pounds on tackling homelessness.

Other rough sleepers in Windsor said they feared that the authorities would clear them from the town`s streets before the wedding on Saturday - in stark contrast to the welcome that the royal fans, nestled down beneath swathes of fluttering red, white and blue bunting, had received.

Thames Valley Police, the local force in charge of the wedding security, they were working closely with the council and local services to “offer support” to the homeless in Windsor.

"A scheme has been set up for those who choose, to store their belongings at the Windsor Homeless Project during the Royal Wedding, and our officers have been assisting with transport of belongings, however this is entirely voluntary to ensure the safety of the homeless community," police said.

The council said all those sleeping rough had been offered somewhere to stay or a place to house their belongings while the more than 100,000 visitors throng the streets of Windsor this weekend.

"We hope individuals will take up the offer to so that we can help prevent them from losing possessions on a day when the town will be extremely busy," the council said in a statement.

The superfans by the castle have been banned from erecting tents as part of tight security measures and they were sympathetic to the homeless living just a stone’s throw away from where they were camping.    “Everybody needs a place to sleep,” said American Donna Werner, who had travelled 3,000 miles from New Fairfield, Connecticut, to camp by the castle for several days.    "Everybody’s not as lucky as some of us ... I feel bad for them," she said.