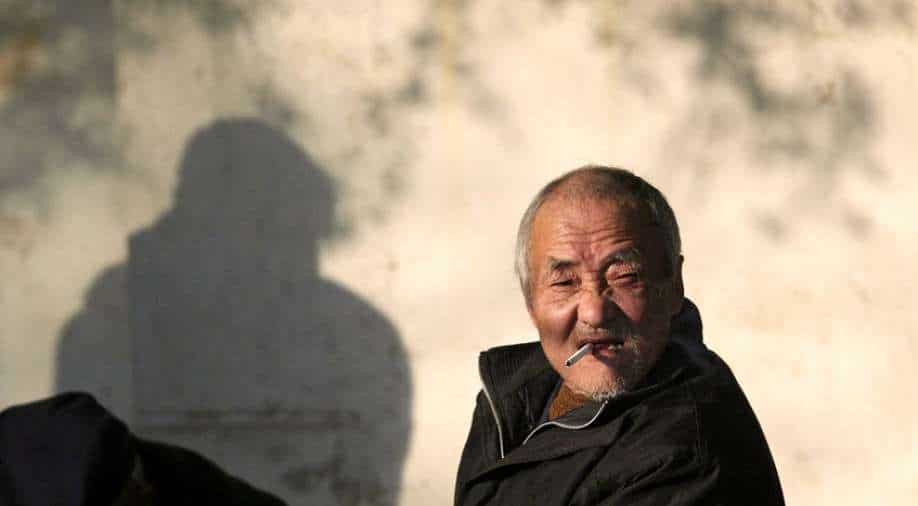 File photo: An elderly man smokes on a street in Nanjing, Jiangsu province. Photograph:(Reuters)
Follow Us

According to Tsinghua University professor Dong, the portion of citizens aged 65 and above will increase sharply, before stabilising at the ratio of about one-third of the total population.

The China Banking and Insurance Regulatory Commission (CBIRC), the country`s top banking and insurance regulator, said at the weekend that it is expanding a pilot program of private pensions into two more regions - Chongqing and Zhejiang province.

And sources with direct knowledge of the matter told Reuters CBIRC is also considering endorsing a list of private pension funds and appointing a group of professional managers to run them under a new scheme.

The change comes days after China showed the extent of its demographic challenges, reporting that citizens aged 65 or older accounted for 13.5% of its 1.4 billion population in 2020, jumping from 8.87% a decade ago.

That scenario, coupled with the 100 trillion yuan of banking and wealth management savings of its people, is enticing to the private sector. Foreign pension providers are also waiting https://www.reuters.com/article/cbusiness-us-china-pensions-exclusive-idCAKCN1RO0FA-OCABS in the wings to jump in as and when rules allow.

But after a tame start, the private pension sector would need higher investment returns and incentives like bigger waivers on capital gains tax to woo the average investor who typically relies on bank deposits and property investment returns to fund their retirement needs, say experts.

Another hurdle is China`s huge informal sector where millions work without contracts and neither they nor their employers make pension contributions.

"The state-led coverage is facing challenges, and the expansion of corporate contributions to the pension system is limited by informal employment," said Dong Keyong, a professor at Tsinghua University, at a forum in Beijing this week.

"A third source, and only the third source (of private pensions), is the way out, and there`s an urgency for us to further expand this pilot."

While the government and corporations are the main contributors to pension systems in developed countries, China`s corporate contributions and private pensions were equal to 7.3% of its gross domestic product as of end-2018, versus 136% in the United States, according to data provided by Dong.

Most Chinese rely on state-led urban pension funds, which require employers to contribute the equivalent of 16% of their staff`s basic salaries to the state pension fund each month, a ratio higher than many countries.

Former finance minister Lou Jiwei said last year that the state pension on average was only sustaining the retired with less than 50% of the income they earned before retirement, and that ratio was expected to go down further.

According to Tsinghua University professor Dong, the portion of citizens aged 65 and above will increase sharply, before stabilising at the ratio of about one-third of the total population.

The CBIRC did not immediately reply to a Reuters request on Thursday seeking comment.

Some local insurance giants, including the People`s Insurance Company of China and China Pacific Insurance Group, and some mutual fund houses have been selling commercial pension products, but they are short-term, lasting no more than a few years.

Appointed insurers in the first private pension investment trial - in Shanghai, neighbouring Suzhou city and Fujian province - only lured some 400 million yuan in purchases over the past three years. That was just a fraction of China`s current 8 trillion yuan pension system.

It "started off on the wrong foot," said Zheng Bingwen, an expert with CASS, in 2019, citing reasons such as insufficient policy incentives for individuals and sales agents.

In the longer term, the CBIRC is looking to boost private pension investments backed by China`s 80 trillion yuan of banking deposits and 20 trillion of wealth management products.

"We should study and turn massive individual savings that do not have pension characteristics into long-term, secured, profitable pension products. I believe that`s what we need to do, and that we already have the foundation of," CBIRC Vice Chairman Xiao Yuanqi told the Boao Forum in April.