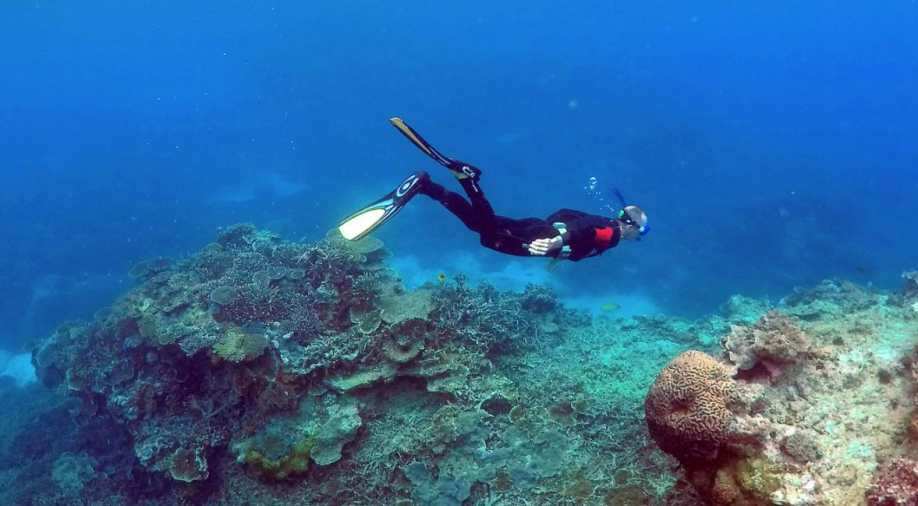 A man snorkels in an area called the "Coral Gardens" near Lady Elliot Island, on the Great Barrier Reef, northeast of Bundaberg town in Queensland, Australia, June 11, 2015. Photograph:( Reuters )

A report last month said mass coral bleaching, caused by climate change, had destroyed at least 35 per cent  of the northern  and central Great Barrier Reef and that the coral mortality rate would likely rise.

The report cast a shadow over the long-term prospects for the reef, which attracts about A$5 billion ($3.7 billion) in tourism each year. Scientists also believe UNESCO may reconsider its decision not to put the reef on its endangered list.

Turnbull, on the campaign trail for the July 2 election in tropical northern Queensland state, the usual jumping-off point for tourists going to the reef, said he would instruct Australia's Clean Energy Finance Corporation (CEFC) to redirect A$1 billion of its A$10 billion fund.

The money would go to a loans scheme aimed at reducing the agricultural and waste water run-off that is diminishing the reef's ability to withstand rising sea temperatures.

"Much of this will come in the form of financing solar energy, which of course will reduce emissions but also enable farmers to manage their land more efficiently ..." Turnbull told reporters in Townsville.

Bleaching occurs when the water is too warm, forcing coral to expel living algae and calcify.

The findings of the survey came at a bad time for Turnbull, who was under pressure after Australia's department of environment confirmed it had omitted its contribution to a UN report on the impact of climate change on world heritage sites over concerns it might have a negative impact on tourism.

Turnbull's conservative coalition began the seven-weak election campaign with a healthy lead over the centre-left Labor opposition but opinion polls now have them neck-and-neck.

The Labor opposition which announced a A$500 million ($369 million), five-year plan for the reef last month, criticised Turnbull for "raiding" the CEFC to fund his pledge.

"Malcolm Turnbull is misleading Queenslanders and other Australians in saying he's providing any additional funding to the Great Barrier Reef at a time of great crisis," Labor's environment spokesman, Mark Butler, told the Australian Broadcasting Corp.

Scientists are unsure how much of the damaged areas of the reef will regenerate as winter brings cooler temperatures.