48 dead as bus plunges off cliff in Peru 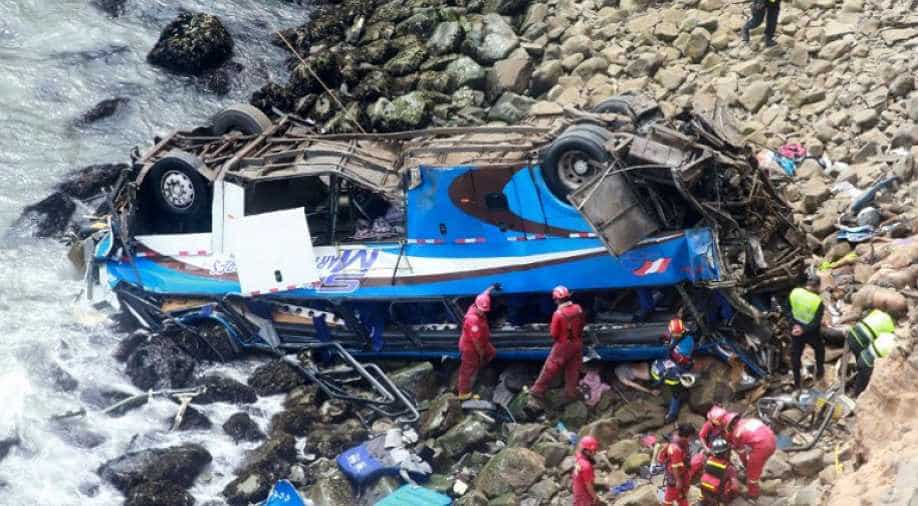 The accident took place along a precarious stretch known as the 'devil's curve' and the bus was thrown off a seaside cliff, officials said

At least 48 people were killed in Peru today after the bus they were riding collided with a truck along a precarious stretch known as the "devil's curve" and was thrown off a seaside cliff, officials said.

The bus was travelling from Huacho, 130 kilometers north of the capital, to Lima with 53 passengers on board when it went off the road about midday.

It plunged 100 meters and landed upside down on rocks at the edge of the sea.

He earlier gave a toll of at least 25 dead but said the number of victims could increase.

A police helicopter winched some rescue workers down to the wreck of the blue bus while others made the precarious journey down on foot with the assistance of ropes.

The Navy sent a patrol boat to assist the rescuers trying to get everyone out before the tide rose.

At least six people were confirmed to have survived.

One other survivor was taken to a different hospital.

The accident took place on a coastal highway about 45 kilometers north of the capital Lima, Escudero said.

The Pasamayo highway on which the tragedy occurred is only used by trucks and buses, as cars travel a different route.

It is a dangerous sea-hugging road where fog is frequent and high humidity can make the roadway slippery.

The bus driver had a lot of experience and was working with an assistant, said Luis Martinez, a representative of Transportes San Martin de Porres, which owned the bus.

Martinez could not confirm whether the driver had been killed or injured, but added that the bus underwent a mechanical check before leaving Huacho.

More than 2,500 people died in traffic accidents in Peru in 2016, according to official figures.