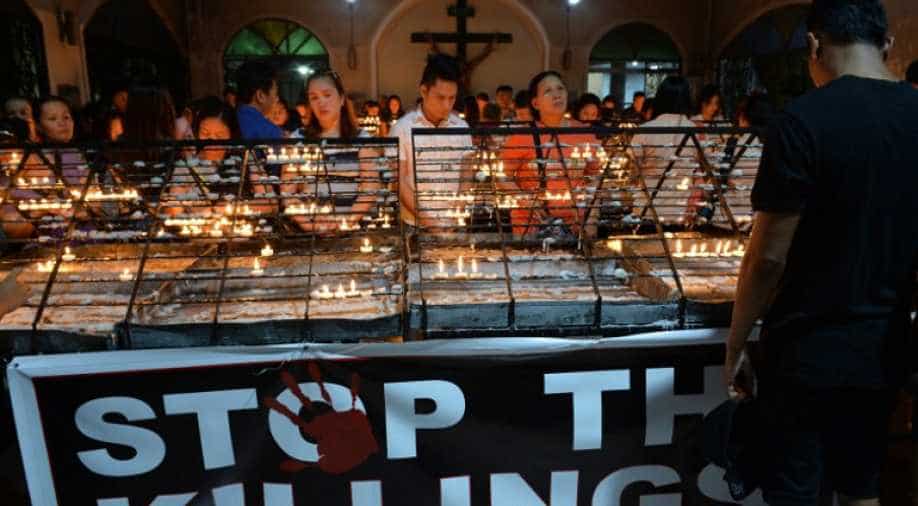 The explosion hit churchgoers attending a series of Christmas Eve masses at the Archdiocesan Shrine of Santo Nino. Photograph:( AFP )

A blast ripped through a police car outside a Catholic church in the southern Philippines late Saturday, authorities said, wounding 13 people including a police officer.

The explosion hit churchgoers attending a series of Christmas Eve masses at the Archdiocesan Shrine of Santo Nino in the farming town of Midsayap, a priest who present at the service said.

The blast occurred about 30 metres (98 feet) away from the church's entrance and caused panic, he added.

The regional police spokesman, Superintendent Romeo Galgo, confirmed the blast which he said was caused by an unspecified explosive device.

Thirteen people were wounded by the explosion and treated at nearby hospitals, including a police officer and an unidentified person, according to an updated police tally.

Authorities did not immediately say who was responsible for the blast. No group has claimed responsibility.

A police investigator who asked not to be named told AFP it appeared the suspects had initially targeted the church but later settled for a patrol car assigned to guard the building instead.

"It seems they wanted to get closer but due to heavy security they opted to throw the explosive at the police car blocking the road," the officer added.

The explosion damaged the police car and a pickup truck parked nearby, police said.

The town, about 900 kilometres (559 miles) south of Manila, is located in the middle of the large Philippine island of Mindanao, home to a Muslim minority and decades of armed rebellion.

However the main Muslim guerrilla group in the area has signed a ceasefire with the Philippine government.

Government forces continue to fight smaller Muslim armed groups on the island, some of whom have pledged allegiance to Islamic State fighters in Iraq and Syria and have been blamed for bombing civilian targets in the past.