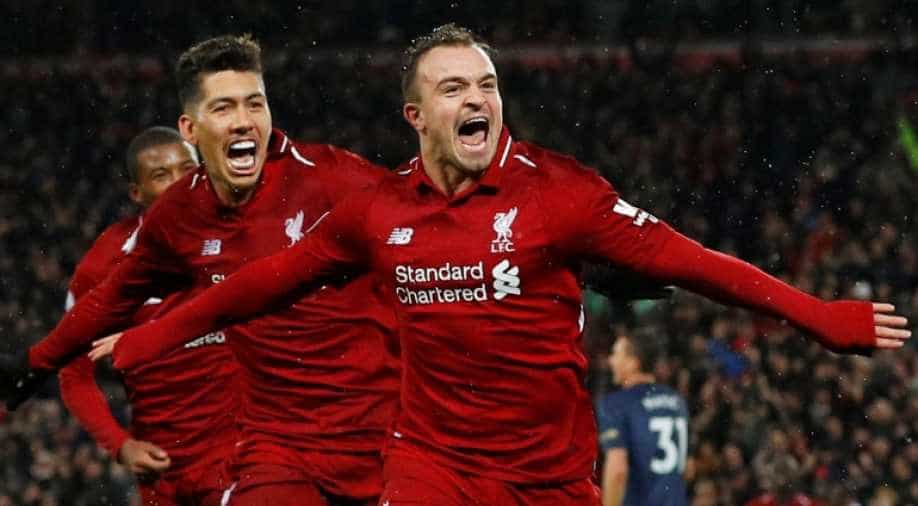 Liverpool were faster, smarter and more incisive than a United team again lacking any cutting edge and looking mediocre against opponents who look equipped to fight Manchester City all the way for the title.

Two second-half goals from substitute Xherdan Shaqiri gave Liverpool a 3-1 Premier League win over Manchester United at Anfield on Sunday as Juergen Klopp's side regained top spot with a pulsating performance in the North West derby.

Unbeaten Liverpool have 45 points from 17 games with champions Manchester City, who beat Everton 3-1 on Saturday, a point behind.

United are 19 points adrift of Liverpool in sixth place -- the biggest gap between the clubs at this stage of this season for 46 years -- and a daunting 11 points behind the top four.

Jose Mourinho's side's 26 points is their lowest return after 17 games in the Premier League era and the defeat, which could have been even more emphatic, is sure to re-open questions about the manager's future.

Mourinho left French World Cup-winning midfielder Paul Pogba on the bench as he opted for a defence-orientated line-up but his attempt to get a third straight draw at Anfield ended in failure.

Klopp's side were faster, smarter and more incisive than a United team again lacking any cutting edge and looking mediocre against opponents who look equipped to fight Manchester City all the way for the title.

Liverpool roared out of the traps and took the game to United, grabbing the lead in the 24th minute when Sadio Mane chested down a pass from Fabinho and slotted past David De Gea.

Against the run of play, United drew level in the 33rd minute when Liverpool keeper Alisson Becker spilled a harmless low cross from Romelu Lukaku and Jesse Lingard pounced on the loose ball to find the net.

The hosts continued to dominate but too often were restricted to long-range efforts and it was not until the introduction of Swiss international Shaqiri that the game turned decisively in their favour.

Mane's pull back from the byline took two deflections as it ricocheted to Shaqiri on the edge of the area and his shot flew off Ashley Young and into the top corner to make it 2-1 in the 73rd minute.

Seven minutes later fortune was on Shaqiri's side again as another deflected shot, this time off Eric Bailly, beat the helpless De Gea.